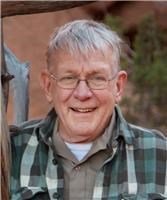 We are sad to report the passing of Roger Lee Runnoe on Sat Feb 6, 2021. He
was born on May 6, 1946, and grew up at 325 Robbins St., Seymour. His
parents were Norbert Runnoe and Mildred Jenkins Runnoe. Roger graduated
from St. John Grade School in 1960. He attended Sacred Heart Seminary,
Oneida for five years, then graduated from the University of Wisconsin,
Madison in 1968. He spent most of his years in Oakland, CA. Roger is
survived by his dear wife Dale and two children, daughter Jessie and son
Jeb. Roger has three siblings - Sharon Runnoe Hinrichs, Mequon Wis; Carol
Runnoe Dwyer, Yuma, AZ; and Will (Bill) Runnoe, Homer, AK.
Published by The Press Times from Apr. 1 to Apr. 16, 2021.
To plant trees in memory, please visit the Sympathy Store.
MEMORIAL EVENTS
To offer your sympathy during this difficult time, you can now have memorial trees planted in a National Forest in memory of your loved one.
MAKE A DONATION
MEMORIES & CONDOLENCES
0 Entries
Be the first to post a memory or condolences.