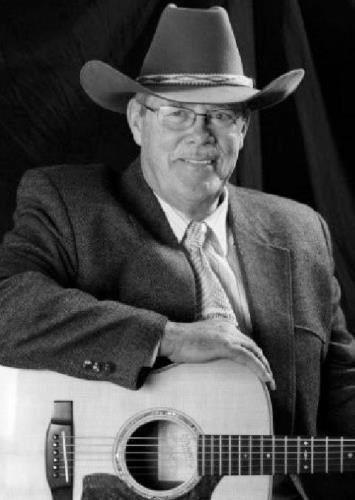 "The Leavin of Texas"

Ed was born in Macon, Georgia on July 26, 1942 to Robert "Doc" M. Stabler & Sarah "Sally" (Hamilton) Stabler. He passed on Jan. 26, 2017 after a brief illness with pancreatitis following surgery at Methodist Hospital in San Antonio, Texas.

Ed's rich history began in the Navy communications division; he had the fortune to be assigned to an open schooner in Hawaii. As he moved from service life to civilian life he chose to stay in the communication genera. However, he was a newscaster-weatherman, steam locomotive engineer, liquor store owner, Moffat County Colorado deputy, part time rancher/horse owner/breeder/trainer but always came back to his passion for music performing arts. He, along with his wife Mary traveled to many Cowboy poetry gatherings. Ed was a member of the Western Music Association and a past member of the WMA Board of Directors. His passion for firearms was almost as great as his passion of and for music as he was a life member of the NRA.

It was amazing to watch Ed learn a new instrument, song or style of playing. From Old Country, Jazz, Hawaiian Slack Key, to Classical. For the past couple of years he spent every Thursday night at Back Beat Music Co. mentoring the youth as well as learning from them. He was a regular participant and performer at the Chicken Farm Art Center, Saturdays and Second Thursday concerts. Through his connection with The San Angelo Symphony he performed throughout West Texas in assisted living retirement communities and nursing facilities. He also performed in local venues regularly and worked as an in demand recording session musician.

He was preceded in death by his wife Mary and his parents. He leaves a son Daniel, daughter Janine (Rowdy) Stehle-Doehling, granddaughter Lindsey (Matthew) Stehle-Doehling and soon to be born Great Grandson Timber.

In Lieu of flowers, his family asks that you send a monetary donation to the Western Music Association for their youth scholarship fund, P.O. Box 648, Coppell, TX 75019 or to the

Yampa Valley Friends of the NRA, P.O. Box 1504 Craig, Colorado 81626 as they are supporters of the Moffat County 4-H Shooting Sports.

There is not enough room as he was also a Composer, Player, Friend and Companion. To say he will be greatly missed is truly an understatement and as a close friend stated. "He played guitar for Roy Rogers for cryin out loud!"

"It's not the leaving of Texas that's grieving me,

But my darling that I'm bound to leave behind."
Published by GoSanAngelo on Feb. 2, 2017.
To plant trees in memory, please visit the Sympathy Store.
MEMORIAL EVENTS
Feb
2
Memorial Gathering
7:00p.m.
Chicken Farm Art Center.
2505 Dr. Martin Luther King Dr., San Angelo, TX
Feb
4
Memorial Gathering
10:00a.m. - 4:00p.m.
TX
MAKE A DONATION
MEMORIES & CONDOLENCES
5 Entries
Ed was a great and gracious entertainer. I had the honor to meet and hear him in Rio Chama RV park. He and his music will be greatly missed. My condolences to his family and friends.
Ann Dixon
February 21, 2017
There will never be another cowboy like Ed Stabler. Our condolences to his family, to the friends we share, and to the ones we haven't met. This is not the end of the trail, but it's a hard turn to lose sight of a good friend like Ed. Until we meet again... sincerely, Dottie & Goodnight
Dorothy Douthit
February 3, 2017
We are deeply saddened at the loss of this good friend, great musical artist and fine human being. We met Ed through our mutual interest in steam railroad history and conservation, and we enjoyed sharing our love of music with him. We'll miss you, Mr. Ed.
Earl and Marlene
February 2, 2017
You'll be greatly missed and greatly remembered, Ed. I look forward to making music with you again someday. - Kim Abel Snell
February 2, 2017
We really enjoyed Ed'smusic the one time we heard him on Cumbres Pass. Also enjoyed and learned from his postings on the Goat. He will be greatly missed.
Our condolences to Ed's family.
Joe Corson
February 1, 2017
Showing 1 - 5 of 5 results