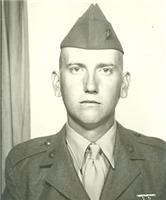 FUNERAL HOME
Elliston-Stanley Funeral Home
500 N. Main
Williamstown, KY
Howard Dennis Hutcherson, 68, of Crittenden, died Monday, Aug.11, 2014 at his residence.
Howard was one of seven children of the late John Overton and Mary Kathern Johnson Hutcherson, the others are, James Hutcherson, John O. Hutcherson, Revel Hutcherson , Boyd Wayne Hutcherson, Evelyn Fay Harp and Sylvia Laura Hutcherson.
A veteran of the U.S. Marine Corps, a retired laborer for the Equitable and Duro Bag Co. and a member of the Oak Ridge Baptist Church, he was united in marriage on June 1, 1968, to Donna Sue Kearns.
Survivors include his wife, Donna Sue Kearns; a son, Chris Hutcherson of Union; and two grandchildren, Joshua Ryan Hutcherson of Los Angeles, Calif. and Connor Mason of Union.
Funeral services were held on Aug. 13 at the Elliston-Stanley Funeral Home in Williamstown.
Burial will be in the Kentucky Veterans Cemetery North in Williamstown.

Published by Grant County News from Aug. 15 to Aug. 21, 2014.
To plant trees in memory, please visit the Sympathy Store.
MEMORIAL EVENTS
To offer your sympathy during this difficult time, you can now have memorial trees planted in a National Forest in memory of your loved one.
Funeral services provided by:
Elliston-Stanley Funeral Home
MAKE A DONATION
MEMORIES & CONDOLENCES
9 Entries
May the love of God shleter your family during your time of grief. May God be your fortress and bring comfort and loving memories to hold in your hearts. I'm truly sorry for your loss. Psalms 37:39
August 21, 2014
Donna So sorry for your lost there are no words to say to help you in this time
Darryl
Darryl Dykes
August 15, 2014
Condolences to the Hutcherson family! So sorry for your loss, and may God be with you always!
August 13, 2014
So sorry for your loss
August 12, 2014
Goodbye to a wonderful soul and cherished man, you will be missed, condolences to the Hutcherson family
Dai Ahmed
August 12, 2014
So sorry to hear of Dennis passing he sure was a hard worker and a wonderful person.