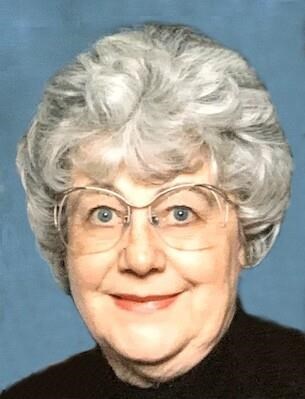 Great Falls - Agnes Clara Mabe, was born in Grundy, Virginia on September 10, 1932, to Bessie and John Duty. She was raised as a child of rural farm life. However, her desire to live an independent lifestyle and have a career was strong. As soon as she graduated from high school, she moved to town and began working toward her accounting career at the Grundy courthouse. It was during this time she met the love of her life, Garnett "Lee" Mabe. They were married on January 2,1954.

Garnett was enlisted in the Air Force, and they began their life together in Knoxville, Tennessee. Shortly afterwards, they transferred to Cheyenne, Wyoming where Agnes, while working, added a daughter, Terry, and son, Greg, to their family. Lee's job with the military took the family to Istanbul, Turkey. During their stay in Turkey, Agnes continued to work, keeping her accounting skills sharp and impeccable, only taking time away to take advantage of visiting and enjoying the many cultures of other countries in Europe and the Middle East.

Lee's last military destination brought the family to Great Falls, Montana. Agnes continued working as an accountant in the NCO Club at Malmstrom AFB. On April 13, 1969, she was initiated into the international honorary business sorority, Apha Iota. Their life seemed idyllic. However, their happiness would come to a sad end when her beloved husband passed away in June of 1970. Agnes's Virginia family encouraged her to return home with her children, to her roots, to the family she had left behind, but this strong-willed woman declined, and instead chose to stay in Great Falls.

She left her job at the AFB and began working with Bruce Watkins and Gusto Distributing. This friendship helped to revive the business and maintain Agnes's position as a hardworking, sharp, businesswoman for nearly 50 years. Due to health problems, she was unable to continue working. On June 13, 2021, Agnes left us. She was an amazing, independent woman who was kind and a fierce supporter and defender of her family. She will be missed dearly! Agnes is survived by her daughter, Terry (Carl) Rutherford; son, Greg Mabe; grandsons, Dan Rutherford and Jason (Lauren) Gully; and great-granddaughter, Lola Gully.

Condolences for the family may be shared online at www.SchniderFuneralHome.com.


Published by Great Falls Tribune from Jun. 23 to Jun. 27, 2021.
To plant trees in memory, please visit the Sympathy Store.
MEMORIAL EVENTS
To offer your sympathy during this difficult time, you can now have memorial trees planted in a National Forest in memory of your loved one.
Funeral services provided by:
Schnider Funeral Home
MAKE A DONATION
MEMORIES & CONDOLENCES
Sponsored by Schnider Funeral Home.
0 Entries
Be the first to post a memory or condolences.