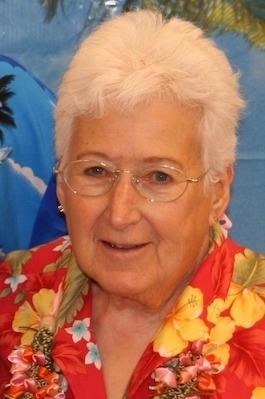 She worked in Conrad where she met Bob Passow. They were married at the Valier Methodist Church on October 28, 1960. They lived in Conrad until November, 1961 when Bob was drafted into the Army. In July 1962, she and infant son, Philip moved to Tacoma, Washington to be with Bob who was stationed there. The family moved back to Conrad in 1963. They moved to Shelby in 1965, Conrad in 1972, Roundup in 1976, Glendive in 1977, Lewistown in 1982, and Helena in 1990; following Bob's career with the state highway department.

They retired in Lewistown in 2000. Barb was a devoted wife and mother. She did home daycare, delivered newspapers, cooked at the Whole Famdamily, was a counter person at McDonalds, volunteered at many community organizations and was an active member of United Methodist Church in Lewistown. She loved to be part of THE KITCHEN BAND that played at local nursing homes.

She is survived by her husband, Robert; sons, Philip of Reno, Neal of Lewistown, Jere of Reno; daughter, Jean Smith of Aurora; and sister, Bonnie Martin of Great Falls. She is also survived by grandchildren, Kevin, Alec, Andrew and Kathryn Passow and Aaron and Amber Smith; and numerous nieces and nephews. She was preceded in death by her parents, Ralph and Eva Bowman; infant son, Keith; sisters, Margaret Reynolds, Evelyn Wipperman, and Edna Garman; and brothers, Howard, Gregory, Joseph and Douglas Bowman.

Arrangements are under the care of Creel Funeral Home. Barb's family and friends can share memories and condolences at www.creelfuneralhome.com


Published by Great Falls Tribune from Jun. 22 to Jun. 26, 2021.
To plant trees in memory, please visit the Sympathy Store.
MEMORIAL EVENTS
Jul
2
Memorial service
2:00p.m.
United Methodist Church
512 W. Broadway, Lewistown, MT
Jul
3
Graveside service
1:00p.m.
Hillside Cemetery
Conrad, MT
Funeral services provided by:
Creel Funeral Home - Lewistown
MAKE A DONATION
MEMORIES & CONDOLENCES
Sponsored by Creel Funeral Home - Lewistown.
1 Entry
Dear Uncle Bob, Phil, Neal, Jerry, Jean and your families. I am heartbroken on the loss of Aunt Barb. My thoughts and prayers are with each one of you as you navigate this difficult time. So many special memories of time spent with the Passow family. There were times when I felt as much a part of your family as my own. Aunt Barb holds a very special place in my heart. I shall miss her deeply. I want to share something I wrote that helps me in times of loss. How do we? Slow the tears that fall. Keep the sadness from overwhelming. Fill the emptiness in our heart . Make our heart understand. Live without them. Find joy again. We do because our memories will carry us through. We do because our loved one wants us to. We do because love will fill our hearts again. We do because we know that God is with us, holding us in the palm of His hand. We will go on in His light and grace. ~DJB~ Love to you all, Your niece and cousin Debbie
Deb Burke
Family
June 23, 2021
Showing 1 - 1 of 1 results