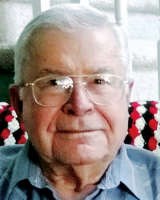 Howard was born on Jan. 7, 1924, on a farm near Medicine Lake. He resided in Glasgow before the family moved to the newly established town of Hogeland on the so-called "Big Flat." The family farmed land north of town as well as a mile south of town, where their home was located. In the midst of the Depression, the Naces moved to Seattle, but continued to operate the farm in Hogeland.

While serving in the US Army during WWII, including combat with the Japanese in the Philippines, Howard received the Bronze Star. After the War, he returned home to Seattle, where he completed his education at the University of Washington. He was awarded a degree in Mechanical Engineering in 1949. He later made Hogeland his home, though he traveled extensively around the world during the winter months. He was an avid photographer and had a huge collection of slides from many different countries. Around Hogeland, he was the unofficial wedding photographer.

Howard's parents, William and Gina Nace, passed away several years ago. He was the last of their children. Two boys died in infancy, and Clarence, Ralph and Fern passed away in more recent years.

He is survived by several nieces and nephews.

Condolences may be posted online at www.gftribune.com/obituaries.

Published by Great Falls Tribune on Jun. 25, 2012.
To plant trees in memory, please visit the Sympathy Store.
MEMORIAL EVENTS
To offer your sympathy during this difficult time, you can now have memorial trees planted in a National Forest in memory of your loved one.
MAKE A DONATION
MEMORIES & CONDOLENCES
8 Entries
Cousin Howard touched all our lives with his travels to many friends and relatives in many parts of the country and the world. In addition to his travel experiences, Howard had many stories to pass on with his background in the service, the University of Washington, and wheat farming. He will always be missed in our home and at future family gatherings.
Helen (Solar) & Gary Bowman
June 27, 2012
To Howard's Family,
Everyone here at The Lodge sends their thoughts and prayers. Howard was a dear man. He will be missed. May God Bless you all. Terri Bede
Terri Bede
June 26, 2012
I 'm sorry to hear of Howard's passing. I've know him since I was a teenager. Enjoyed all the many visits. I will miss the phone calls since he stayed at the Lodge. My sympathy to all the family. Jackie Olszewski Kranz
June 26, 2012
I'm sorry to hear of Howard's death. It was always nice to visit with him. God bless all his nieces and nephews.
Betty Wilcox Matoon
Betty Matoon
June 25, 2012
The Solar family members spent many hours with Howard through the years exchanging visits and sometimes traveling together in both the U.S. and abroad. We will sincerely miss him! George, Martha, Alma, Bill, Carl,Janet, Helen and Hazel.
June 25, 2012
cousin "H" will always be with us
with one of his many jokes....
George,Jim and Bob Solar
June 25, 2012
He was the official Cichosz family reunion photographer. He was so patient, always had a story and was a good friend to our whole family. Clara Cichosz
June 25, 2012
To Howard's family;
I send my deepest sympathy to all of you. He was a wonderful man and I enjoyed the time I was at The Lodge while he was there. We enjoyed simple visits often. Ronda Lopez
Ronda Lopez
June 25, 2012
Showing 1 - 8 of 8 results