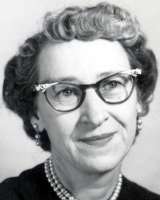 Visitation is 1 p.m to 5 p.m. Wednesday at the Whitted Funeral Chapel, followed by a rosary/vigil service 7 p.m. Wednesday at St. Margaret Catholic Church in Cut Bank. The funeral mass is 11:30 a.m. Thursday, also at St. Margaret Catholic Church, followed by a reception in the fellowship hall. Whitted Funeral Chapel is in charge of arrangements.

Josephine McDermott died peacefully surrounded by loving family and friends on June 19. Fr. Michael Drury and the Most Reverend George Leo Thomas will be presiding at the funeral mass, 11:30 a.m. Thursday. Josephine's ashes will be inurned at a private ceremony at the Crown Hill Cemetery at a later date.

Josephine was born May 15, 1914 to Joseph and Mary (Hauzner) McDermott in Chinook. She grew up in the Zurich area. She graduated from Harlem High School and attended Northern Montana College and The College of Great Falls, earning her teaching degree. She began her 44-year career in 1936, instructing in several Blaine County country schools. After her father's death in 1939, she moved back to Harlem in order to support her mother and help raise her young sister, Donna. Josephine taught first grade at Lincoln Grade School in Harlem. In 1963, Josephine and her mother moved to Cut Bank. She spent the rest of her professional career teaching kindergarten at Southside Elementary School, until her retirement in 1980. She enjoyed her retirement years, serving others, including volunteering at the Cut Bank Food Pantry and being actively involved in the St. Margaret Catholic Parish.

She was a long-time member of the Delta Kappa Gamma Rho Chapter. She enjoyed several hobbies, to include learning sign language, swimming, rock collecting, crocheting, doing word jumbles, and caring for her beloved cat, Silky.

She loved people and enjoyed visits with friends. She made everyone feel special, including her former students, whom she often fondly reflected with special memories and stories. She cherished the community of Cut Bank, and in recent years received several awards, including being honored as Grand Master of the Lewis and Clark Parade and 2011 Cut Bank Citizen of the Year.

Even though Josephine never married or had children of her own, she will be greatly missed by her surviving family including her sister and brother-in-law, Donna and Robert Greytak of Gildford; her sister-in-law, Margaret McDermott of Dallas; her nieces, Susan and Mary Elizabeth McDermott of Dallas, Texas; Jean (Gary) Dale of Missoula; Barbara (Bill) Carroll of Helena; Nancy (Ken) Wells of Clarksville, Tenn., Anita (Jim) Dunnigan of Libby, and Laurie (Mike) Fox of Wolf Point; her nephews, Joe (Tami) Greytak and Gary (Diana) Greytak of Havre and Tim Greytak of Gildford; and 13 great-nieces and nephews.

Josephine was preceded in death by her parents; her brother, John McDermott; and her sister, Sybil Hauzner.

In lieu of flowers, donations may be made to the Cut Bank Food Pantry, St. Margaret's Catholic Church in Cut Bank, or a charity of your choice.

When interviewed by the local Cut Bank paper, Josephine described her life as an incredible ride from the very beginning. It's been full of wonderful surprises, tremendous blessings and has been made complete by a loving family, good friends, and a career she loved so very much.

To plant trees in memory, please visit our Sympathy Store.
Published by Great Falls Tribune on Jun. 21, 2011.
MEMORIAL EVENTS
No memorial events are currently scheduled.
To offer your sympathy during this difficult time, you can now have memorial trees planted in a National Forest in memory of your loved one.
MEMORIES & CONDOLENCES
15 Entries
Miss McDermott touched so many lives, and I believe that we were all her children. She had the knack of making those around her feel special, while she was indeed the special one. She will be missed.
Deborah Kimmet
June 24, 2011
She was my first grade teacher when I started 1st grade in Harlem. Being the first teacher I ever had, she has always been in my mind from time to time. My mother who is 93 and her sisters were in high school with her many years ago.
June 23, 2011
Miss McDermott was always such a sweet and loving lady. Although my two kids never had her for a teacher she always followed what they were doing. She was a person you always felt so comfortable with and I do believe she had every child's name memorized - even the ones in other classes. She was a truly wonderful lady and will be missed by many..
Shirley Schnee, Sacramento, CA.
June 22, 2011
Miss McDermott will always have a special place in my heart. I only new her as my Kindergarden teacher, but yet, she always remembered me when we met. I moved away from Cut Bank in 1970, yet she STILL remembered. Thank you for helping me feel special.
Aron Quist
June 22, 2011
I will think of Miss McDermott every day as I teach my own students. I have my kindergarten picture, a poem that she wrote for my wedding about the kitchen "magic" of kindergarten, and a portrait that my husband took of her a few years ago all framed and hung in my kindergarten classroom. I tell my students each year about my wonderful kindergarten teacher, her sweet voice and beautiful smile that is etched in my mind forever! I'm so thankful that I got to see her one last time in April and I look forward to seeing Miss McDermott in heaven someday. What a GLORIOUS day that will be!
Lisa Munson Mulcrone
June 22, 2011
Miss McDermott was a very special lady, who, influenced everyone with whom she came into contact with. I am so blessed to have had her for a teacher and then to have known her in adulthood. Miss McDermott was truly an example of how to share the love of God with others. The world is a lot less bright without her presence.
Jeanne Lee
June 22, 2011
A truly blessed and beautiful woman, there is a special place in heaven for Miss McDermott.
Sandra Romango
June 22, 2011
What a wonderful first grade teacher Miss McDermott was, and I was so fortunate to have her at Lincoln Grade School in Harlem. Over the years, I kept in contact with her. She remembered everyone! She truly was a blessing and a treasure.
Karolee Cronk
June 22, 2011
A truly wonderful, delightful, and inspirational light has gone out in the universe. Miss McDermott was the best first teacher any kid could have, and I will never ever forget her.
Renee Garrow
June 21, 2011
I have known Josephine for the past 26 years in Delta Kappa Gamma. She was a delightful woman, a dedicated teacher, and always had a smile and words of encouragement or appreciation. She was a beautiful spirit and will be missed by many. Those who knew her are richly blessed. My sympathies are extended to her family and friends.
Carolyn Burns
June 21, 2011
Miss. McDermott influenced my life tremendously greatest lady! I mention to my kids what a great teacher she was, and how I wish they could have gotten to experience her teaching. She remembered me by name up until her passing. She was incredible and an assett to everyone she met.
Shelly Gray-Lighthizer
June 21, 2011
Miss McDermott was one of the most special people on this earth. She pointed so many of us in the right direction early in life; and would greet every student with as much joy 30 years later as she did that first day of kindergarten. What a remarkable lady!
Molly Hayes
June 21, 2011
She was a great lady, great teacher, always was glad to see her kids she taught, I can remember some of the times in kindergarten as a kid, she was a kind and caring teacher, great lady indeed. Cut Bank has lost another treasure.
greg tavary
June 21, 2011
What an incredible woman. The greatest teacher ever. She never forgot my name and I am almost 50. Would see her at mass every summer. I will so miss her bright spirit she so radiated to all around her. Prayers and God Bless to her family.
Nola Becker
June 21, 2011
Fond memories of Ms McDermott from Harlem, the Wallace Russell family.
June 21, 2011
Showing 1 - 15 of 15 results