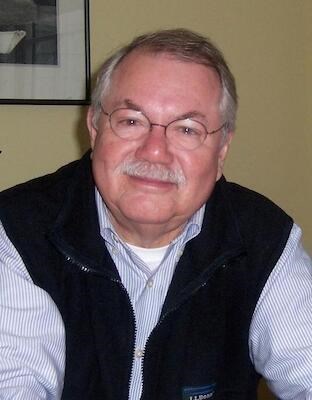 Longtime former Great Falls resident and history professor (and Professor Emeritus) at the University of Great Falls (now known as Providence), Roger Price Snow died June 18 after courageously battling a lengthy, debilitating illness. Roger was a devoted and loving husband and father, who was always there for his family; cheering them on, showing them how much he cared, and keeping them laughing with his mischievous sense of humor. He was funny and kind. Roger is survived by his wife Judy of 57 years of Park City, Utah and their daughters and their spouses, Jennifer (Dave), Stefanie (Ron), and Emily (Matt), grandchildren Calder and Ellison, and grand-dogs Hazel and Cora. Born in Salt Lake City, Utah in 1937 to Katherine Price Snow and Richard Rogers Snow, one of Roger's early memories was taking a "troop train" from Salt Lake City to San Francisco where his dad was stationed on a supply ship during World War II. Roger credited that journey as the defining moment that inspired his lifelong interest in and passion for studying and teaching history. He graduated from Westminster College with a Bachelor of Arts in history, the University of San Francisco with a Master of Arts in history, and the University of Oregon with a PhD in history. At the University of Great Falls, Roger served on numerous faculty committees, was faculty advisor to several student organizations, and served a term as faculty representative on the Board of Trustees. In each of these roles he was an ardent advocate for his students. Roger loved teaching, and many evenings and weekends were spent helping students develop and refine projects. In addition to history, Roger had a passion for classical music, particularly opera. He authored the "program notes" for the Great Falls Symphony for over 25 years. He was a member of the Great Falls Symphonic Choir and served for a time as its representative on the Symphony Board. He served on the Board of Great Falls Public Radio and co-hosted symphony radio previews with Gordon Johnson. Roger's love and knowledge of opera was so apparent, that even as an underclassman at Westminster College, his music history professor often called upon Roger for opera expertise. Family trips, particularly for Roger and Judy, always included going to the opera, and every Saturday afternoon he listened to the live Metropolitan Opera broadcasts. Roger is missed by many. In remembrance of Roger's life, you may consider making a memorial donation to the Metropolitan Opera at www.metopera.org.


Published by Great Falls Tribune from Jun. 25 to Jun. 27, 2021.
To plant trees in memory, please visit the Sympathy Store.
MEMORIAL EVENTS
To offer your sympathy during this difficult time, you can now have memorial trees planted in a National Forest in memory of your loved one.
MAKE A DONATION
MEMORIES & CONDOLENCES
7 Entries
Dear Judy, Jack and I have many good memories of Rodger and his wonderful gifts to G.F. Symphony. We fondly remember Roger including Jack on a radio program roger did on jazz. That was such fun for Jack! So sorry to hear of Roger's illness, and for your loss.
Sheila and Jack Giesler
Friend
July 15, 2021
he was a great teacher and his lectures were the history channel before the history channel in the 1970's at the college of gt falls .he could make ancient history intersting enjoy his english and french and 20th cent europe classes
steve grbic
School
July 14, 2021
So sorry to hear of Roger´s passing. He was a wonderful professor, mentor, and friend. My heartfelt condolences to Judy and the family.
Jo Anne Church
July 6, 2021
So sorry for your families loss. I have many childhood memories of Mr. Snow as I was a classmate of Stepanies. Basketball games, school activities and walking home after school to the Snow house. Prayers to the entire family.
Kyra Frandsen (Klundt)
June 28, 2021
Worked with Dr. Snow at CGF/UGF for many years. My sympathies to the family.
Susan Lee
Work
June 28, 2021
I was always impressed with Roger's laid back manner, and his children's upbringing. RIP Roger, I suppose heaven has a Saturday afternoon Opera station.
Doug Mann
Family
June 27, 2021
I took numerous history courses from Mr. Snow at the then College of Great Falls in the late 60's and early 70's. He was a great teacher and was one the reasons I decided to major in History. He was a professional and a gentleman. Rest In Peace Sir!
Tim Troy
School
June 26, 2021
Showing 1 - 7 of 7 results