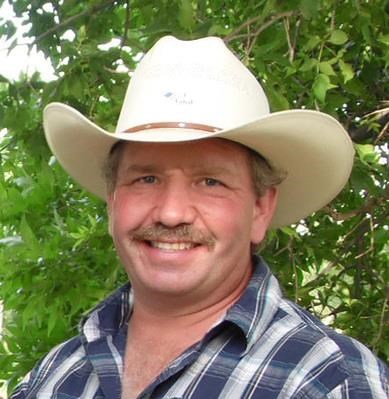 WINIFRED — Trevis Milton Butcher passed away in his sleep of natural causes Sept. 14, 2017 at his home in Winifred. Trevis was born Jan. 23, 1967 in Missoula, Mont. to Edward and Pamela (Ward) Butcher during their final year of college.

During his first four years, the family lived in Hardin, Mont. where his father taught American Government and in Valley City, N. D. where his father was a history and political science professor. In 1971 the family returned to Winifred when they purchased the family ranch from his grandfather Milton Butcher. Young Trevis soon became involved in ranch activities.

Trevis attended Lewis and Clark grade school in Lewistown from 1st through 4th grade. His parents transferred him and his brother to Winifred for his 5th grade where he attended until his sophomore year when he made the decision to transfer to Fergus High School where he played football and became immersed in the Future Farmers of America. He became the only member to be elected twice as the FFA Chapter President, won the District Farm Mechanics contest for three years, as well as winning the Chapter Public Speaking contest for three years. The high-light of his FFA involvement was being awarded the FFA State Farmer Degree. However, one of his greatest thrills was being elected to the State FFA Officer Team. He devoted his first year at Montana State University traveling as a State Officer to FFA chapter functions throughout Montana promoting youth agriculture.

Trevis was a gifted speaker and his senior year in high school was high-lighted when his class voted to have him give a "student address" at the class graduation in addition to the normal Valedictorian and Salutatorian speeches. Trevis' inspirational address to his classmates contained all the "theater and drama" which was his trademark!

While at MSU, Trevis met his future bride Karla Finlayson who was a College of Great Falls basketball player visiting Bozeman. He finished his formal education at MSU, married Karla, and they moved to the ranch at Winifred where he had been operating a 1,500-colony honey bee operation. He began the honey operation during high school in conjunction with the ranch operation. He partnered for five years with Bernie Podeska from California, until Trevis sold his interest.

Upon his return to the ranch, Trevis partnered with his father (Ed) on the cattle and grain operation as ranch manager. In 2008 he and Karla took complete control of Butchers Rolling Hills Ranch. Trevis had converted the ranch from grain to a total cow-calf operation, with dry-land hay which Trevis began producing for the national dairy-hay market.

Trevis became active in local and state politics upon his return to the ranch — leaving the Democrat Party (he had organized Young Democrats in high school) and became an ardent conservative in the Republican Party. He was soon elected Chairman of the Fergus County Republican Committee and was also selected to serve on the State Republican Board.

Trevis successfully managed several state-wide constitutional initiative campaigns including: limiting State budget increases, protecting property rights from eminent domain actions, and allowing voter recall of elected judges (which brought out opposition of the legal community in full force led by then Attorney General — current Governor — Bullock in conjunction with the public employee unions, who were able to maneuver a sympathetic Court to order the initiatives removed from the ballot even though polls showed voter support over 60 percent.

Trevis was a sought after advisor for political campaigns and had numerous offers for national positions. Involvement in the political process resulted in his frustration with the "lack of transparency" (or misrepresentations of officials' voting records) by partisan groups using selective legislative votes. As a consequence, Trevis designed his famous "Legistats" website which reviews ALL votes made by legislators instead of using selective votes to rate and promote favorited elected officials.

He was also a strong supporter of term limits for elected officials and successfully managed the opposition to legislators' efforts to gut or eliminate Montana's limits on Legislative terms.

He dedicated extensive time to local community and youth needs — especially the Winifred Volunteer Rural Fire Department, procuring equipment and serving in numerous positions with a primary focus as the department training officer.

He worked extensively with the home school movement in Fergus County and throughout the State with an emphasis on promoting speech and debate, resulting in a number of the students qualifying for regional and national competition.

However, this man of many talents was centrally focused on involvement in his Church. In addition, he devoted several years to the Gideon Bible distributions as a camp officer and church speaker on behalf of the Gideons.

He was a fourth generation Winifred rancher, who expanded and modified much of the ranch operation with innovative concepts for range management and livestock management, which had become the primary focus at the time of his death.

He will be remembered for his "high energy" love of God and his family, and strong patriotic love for America and its traditional values which he often used his speech and debate skills to defend. Most of all, this warm and gentle man loved people and always had time to visit and help someone in need. Trevis was an organ donor. He left this world the same way he lived — helping others!

Viewing and visitation will be Thursday, Sept 21 from 5 to 8 pm at the Creel Funeral Home Chapel. Services will be held at the Fergus High School auditorium on Friday, Sept. 22 at 10 am with lunch following at Central Baptist Church in Lewistown. After lunch, interment will be in the Winifred Cemetery. In lieu of flowers, memorials are suggested for the Winifred Rural Fire Department, the Gideons, or Your Network of Praise.

Arrangements are under the care of Creel Funeral Home. Trevis' family and friends can share memories and condolences at www.creelfuneralhome.com


Published by Great Falls Tribune on Sep. 19, 2017.
To plant trees in memory, please visit the Sympathy Store.
MEMORIAL EVENTS
Sep
21
Visitation
5:00p.m. - 8:00p.m.
Creel Funeral Home - Lewistown
601 W. Main St., Lewistown, MT
Sep
22
Funeral service
10:00a.m.
Fergus High School Center for the Performing Arts
MT
Funeral services provided by:
Creel Funeral Home - Lewistown
MAKE A DONATION
MEMORIES & CONDOLENCES
Sponsored by Creel Funeral Home - Lewistown.
11 Entries
Dave & Joni Price
September 25, 2017
We are so sorry for your loss and are praying for you and your family.
Mike & Celia Styren
Friend
September 23, 2017
What a rewarding life it sounds like Mr. Butcher was able to enjoy! Please be comforted by the promise at 1 Thessalonians 4:14 knowing there is hope for the ones we have lost in death which can be very heartwarming. I share my condolences with the family.

DDB
September 23, 2017
Our condolences, to young with to many things left undone. Our best to the family.
Porter and Callie Pool
Family
September 22, 2017
Jay and Mary Kruse
September 20, 2017
Our thoughts and prayers are with you, Karla, Jenae and family. Our lives were touched by Trevis and your family through speech & debate. It was Trevis who was one of the parents that was very welcoming to us at our first tournament in Salt Lake just this past March. He was a remarkable person and we have no doubt that you have many heartfelt memories to comfort you. (((HUGS))) and prayers from western Colorado.
Shanna & Abigail Engler
September 20, 2017
Thoughts and prayers to the Butcher family. I will miss the converstions we had about being conservatives and making sure our old fashions values lived on. Trevis was a good friend but he was even a better classmate to all of us that were in the class of 1985.

Terry L. Zink
September 20, 2017
our heart reaches out to the entire family. We have many wonderful memories of Trevis and the adventures of beekeeping. Bringing exchange workers/students to visit our beekeeping business and yellowstone park. His love of God, his family, farming, ranching, nature, country was always uplifting and inspiration
Lance & Patty Sundberg
September 19, 2017
Our sincere sympathies to the Butcher family. Such sad news. We loved hearing the stories of Buhre time at the Butcher ranch. Trevis was one of the good guys and he will be sorely missed. Know that prayers for comfort are coming from Iowa.
Kolleen & Butch Forsyth
Friend
September 16, 2017
So sorry to hear of Travis passing. My thoughts are with you
Bobbie Rossignol
September 16, 2017
Trevis Butcher was a strong Christian, loyal family man, true patriot and one of the good guys. Those of us fortunate enough to have known him understand the hole he leaves behind; especially for his family. I pray you find peace in the memories.
Gretchen Stenson
Friend
September 16, 2017
Showing 1 - 11 of 11 results