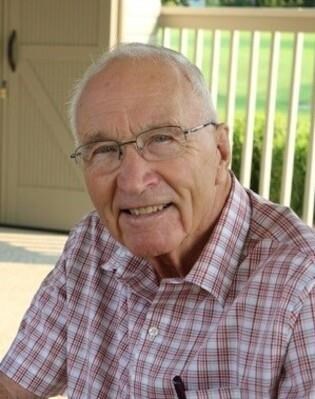 Vern Waldenberg passed away from complications of COVID-19 on January 5, 2021, at the age of 86. Vern was a beloved husband to wife Joanne, father of 9, and grandfather of 25. He was born and raised in Great Falls Montana, where he raised his family. Vern and Joanne then spent their later years living in Spokane, Washington.

Vern attended Central Catholic High School, and it was during these years that he became enamored with the brilliant and beautiful Joanne Bennett. They were married in 1952 and celebrated their 68th wedding anniversary this December. With 5 daughters and 4 sons, Vern wore the title of "Dad" as his proudest achievement. The early years were filled with raising his brood on what he fondly called "the ten acres" at the end of Wilkinson Lane. His children have many wonderful memories of feeding, grooming, and riding horses with their Dad, mowing the lawn on his riding lawn mower and helping him tend his property on his Fordson tractor. Evenings were spent in lively dinner conversations around the table while savoring our mom's cooking.

Vern loved the outdoors and passed that love onto his children. Summers were memorable as we packed up the Rambler for camping excursions to the mountains. As the family grew, he was soon pulling a camp trailer to Lincoln or Swan Lake for weekend outings.

The family was over the moon when he and our Uncle Glenn bought the Smith River Cabin in the 70's. It was new territory to explore and plenty of open space for this huge family. Grandparents, cousins, aunts and uncles were treated to Smith River floating and summer evenings around campfires under the stars, with kids occupying every corner of that cabin. Together, Vern & Joanne built their new cabin in Lincoln Montana, where again a new generation of kids, the pack of grandkids explored the forest around the cabin.

His wisdom, inventiveness, and caring for others had him putting seatbelts in our Rambler in the 60's before they were commonly installed in cars. He was ahead of his time, always willing to learn from others and frequently sharing his latest self-help read with his kids. He was a good listener and had a way of dispensing advice and a lesson for every situation that came up. He will be dearly missed by so many.

Vern was preceded in death by his parents, Louie and Naome; granddaughter Katie (Mitchell) Davis; and his brother Bill Waldenberg. He is survived by his wife Joanne and his nine children, Vern Jr. (Jill), Christine (Jim) Forzley, Carol, Mary Kay Mitchell, Mike (Stacy), Linda (Carl) Baltrusch, Dave (Debbi), Karen (Bryan) Enseleit, Jim (Nancy), and 25 grandchildren along with 18 great-grandchildren. He is also survived by his brothers Glenn (Phyllis) and Terry (Becky).

There will be a graveside service at Mt. Olivet Cemetery on July 10th at 10:00 am with an outdoor reception to follow.

If you wish, the family asks you make a donation in loving memory of Vern to Peace Hospice of Montana in Great Falls or to the charity of your choice.


Published by Great Falls Tribune from Jan. 21 to Jun. 27, 2021.
To plant trees in memory, please visit the Sympathy Store.
MEMORIAL EVENTS
To offer your sympathy during this difficult time, you can now have memorial trees planted in a National Forest in memory of your loved one.
Funeral services provided by:
Pacific NW Cremation & Funeral- South Hill
MAKE A DONATION
Please consider a donation as requested by the family.
MEMORIES & CONDOLENCES
Sponsored by Pacific NW Cremation & Funeral- South Hill.
6 Entries
So sorry to hear of your loss. My prayers are with you.
Clay Pipinich
Friend
January 31, 2021
Dear Family, I will never forget your lovely parents kindness toward me & my twins and all of you who babysat for me while we lived on Suburban lane. Your Dad was the sweetest kindest man i knew next to my own father. May you be comforted by your wonderful memories.
Colleen (Walker) Holzheimer, Jill & Julie Walker
Colleen Holzheimer
Neighbor
January 27, 2021
My deepest condolences for your whole family. Growing up on the northwest side I remember riding my bike and spending time on the ten acres at the end of Wilkinson Lane. I will keep you all in my thoughts and prayers
Jerry Ferderer
Friend
January 23, 2021
Mike and Stacy, we so sorry to read about the passing of Vern. Our warmest thoughts are sent your way. Most sincere, Brian and Lisa Maki
Lisa Maki
Friend
January 23, 2021
Karen, Nancy and family, friends. I'm sorry to hear about your loss. My deepest condolences. Take care.
Roxann Etzel Jung
Classmate
January 23, 2021
May God bless you and your family in this time of sorrow.
Marlene Wardinsky
Friend
January 22, 2021
Showing 1 - 6 of 6 results