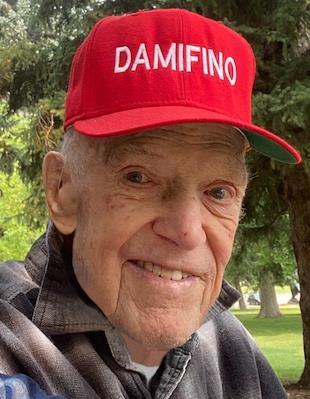 William Leon Oriet passed away peacefully with family by his side on Saturday, June 12, 2021.

Bill was born on February 22, 1928 to William Eli and Jennie Oriet, in Great Falls, Montana. He grew up in Great Falls, attending Great Falls High School where he majored in football, skiing, and girls. Like many of his generation, he finished high school early, entered the United States Marine Corps, and then returned to graduate in uniform with his Class of 1946. He served in San Diego until his discharge in 1948.

After his military service, Bill moved back to Great Falls and began his life's profession as a lineman and then a combinationman for Mountain Bell Telephone. It was in Great Falls he met the love of his life, Patricia J. Karlen, a nursing student at MSC College of Nursing. Throughout their lives together, they felt they were destined to meet, fall in love, and become soul mates. They were united in marriage November 29, 1952, making their home in Great Falls. Bill and Pat moved to the Gallatin Valley in 1957, where he continued his career with Mountain Bell. He and Pat raised five children in the home he built in the valley. It was a home filled with laughter and love, and has filled many family members and friends alike with cherished memories.

Bill was an avid outdoorsman who began his love of hunting and fishing as a child. He hunted well into his late 80s and made his last backpacking trip at age 76. There were no areas of the Spanish Peaks, Gallatin Mountains, Yellowstone Park, and Beartooth-Absaroka Wilderness Area that Bill didn't explore with his family. He truly lived a life of outdoor adventure, living, as he said, "in the best of it."

Bill was a force to be reckoned with…a sharp wit, with an outlook on life that was extraordinary. He was always positive and upbeat, and ready to help a friend in need. Bill was gifted with the exceptional ability to remember a loved one's or close friend's embarrassing faux pas, and hilariously remind them of it as often as possible. It was only one of his many talents. If the conversations, come-backs, and personal adventures of his life could have been captured and recorded, they would have filled a best-selling book. In his words, he was the "Last of the Good Guys."

He and his legendary red baseball cap will be sorely missed. All who knew him will remember him in that cap with a twinkle in his blue eyes, a mischievous smile on his face, and the knowledge that he's got some smart aleck remark with your name on it.

Bill was preceded in death by his parents and his sisters, Dorothy and Valeria. Bill's immediate surviving family include his wife of 68 years, Patricia; sons, Mike (Susan) of North Carolina, Jim (Barb) of Manhattan, MT, and Bob (Carol) of Basin, MT; and daughters, Jan (Richard) of Arizona and Julie (T.D.) of Wyoming. He is also survived by four grandchildren, Meghann, Jonathan, Erin, and Jase; and three great-granddaughters, Allison, MacKenna, and Sophie.

A memorial service is planned for later in the summer. In lieu of flowers, Bill requested donations be made to the Bozeman Health Foundation Cancer Center PATIENT CARE FUND.

Arrangements are in the care of Dokken-Nelson Funeral Service. www.dokkennelson.com


Published by Great Falls Tribune from Jun. 17 to Jun. 27, 2021.
To plant trees in memory, please visit the Sympathy Store.
MEMORIAL EVENTS
To offer your sympathy during this difficult time, you can now have memorial trees planted in a National Forest in memory of your loved one.
Funeral services provided by:
Dokken-Nelson Funeral Service
MAKE A DONATION
MEMORIES & CONDOLENCES
Sponsored by Dokken-Nelson Funeral Service.
0 Entries
Be the first to post a memory or condolences.