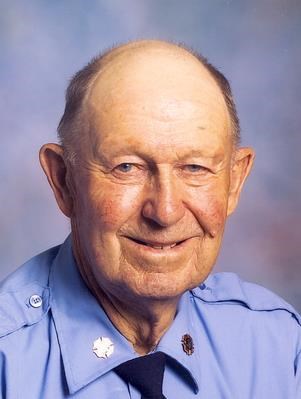 Denmark - Clarence J. "Speedy" Lacenski, age 93, of Denmark, passed away Thursday, March 08, 2018. The son of the late Joseph and Catherine Lacenski was born March 25, 1924 in Denmark. He married Delores Mooney on October 28, 1950 and she preceded him in death in 2009. For over 26 years, he was a construction laborer and member of the Laborers Union. In his later years, he worked in maintenance at UWGB. Speedy was a member of the Denmark Volunteer Fire Department for 66 years, having retired in 2010. He was also an avid community volunteer, and worked for many telethons through the years, where he met many new people. In addition to being an avid story teller, he enjoyed hunting, fishing and spending time with his sons. His faith was important to him, and he was a member of the Holy Name Society at All Saints Catholic Church, where he also served as an usher and mass server, and was a 50 year members and flag-bearer for Catholic Knights. At the Denmark Centennial celebration, Clarence was the oldest living resident of Denmark!

He was preceded in death by his wife, Delores, and a brother Lawrence Lacenski.

Family and friends may visit at All Saints Catholic Church in Denmark on Wednesday, March 14, from 9:00am until 10:45am. Mass of Christian Burial will follow at 11:00am with Fr. Kevin Ori officiating. Burial in All Saints Cemetery. Cotter Funeral Home of Denmark is assisting the family. Online condolences at www.cotterfuneralhome.com

The family would like to give a special thanks to special friends Steve and Marcia Rienow, as well as Scandinavian Court of Denmark, and to Bellin Clinic.


Published by Green Bay Press-Gazette on Mar. 11, 2018.
To plant trees in memory, please visit the Sympathy Store.
MEMORIAL EVENTS
Mar
14
Visitation
9:00a.m. - 10:45a.m.
All Saints Catholic Church
Denmark, WI
Mar
14
Mass of Christian Burial
11:00a.m.
WI
Funeral services provided by:
Cotter Funeral and Cremation Care- Denmark
MAKE A DONATION
MEMORIES & CONDOLENCES
Sponsored by Cotter Funeral and Cremation Care- Denmark.
1 Entry
I worked with Clarence at UWGB during the mid 1980's. He was such a sweet man and the only coworker who showed up for my wedding along with his dear wife. That meant a lot to me. Clarence was always kind and light hearted and often leant a helping hand when needed.
Lisa Fink
March 13, 2018
Showing 1 - 1 of 1 results