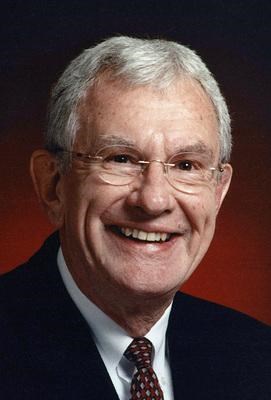 John Roy Underwood died with family by his side on August 25, 2015 at his home in Green Bay following a long battle against prostate cancer. He was born on August 15, 1934 in Whitewater, Wisconsin, the oldest child of Harold W. Underwood and Doris M. (nee Henderson) Underwood.

John spent the bulk of his childhood in Wausau, Wisconsin. He developed a lifelong love of trains growing up across the street from the iconic Milwaukee Road rail depot where, as a youngster, the train engineers let him ride in the steam engine compartment of the switching train and even handle the throttle. He also developed a great appreciation for the outdoors while spending long summer days with childhood friends exploring the sandbars of the Wisconsin River and the woods along the river's banks. This close connection with the Wisconsin north woods remained with him throughout his adult life. He owned two different cottages where he participated in his favorite pastimes including hiking, hunting, fishing and cross country and water skiing with family and friends. But what he may have enjoyed most was hanging out on the pier and playing fetch with his retrievers and spaniels.

His family returned to Whitewater in 1950 and in 1952 he graduated from Whitewater High School where, among many activities, he was a guard on the Whitewater Whippet football team. In 1956 he received his bachelor's degree from the University of Wisconsin-Whitewater where he was President of the Sigma Tau Gamma fraternity and, in John's words, "won the lottery when I met Gail" whom he married on August 18, 1956.

They made their home and raised two sons in Hartford, Wisconsin where John initially taught high school before assuming the position of business manager for the local school district and, in 1968, becoming a banker with First Wisconsin National Bank (now USBank) of Milwaukee. While in Hartford, John also earned his master's degree from the University of Wisconsin-Madison and served his country as a sergeant in the United States Army, based at Fort Lewis, Washington during the Berlin Crisis. The household later grew with the addition of a nephew and niece.

John and Gail moved to Green Bay in 1977 when he was elected President and CEO of First Wisconsin National Bank of Green Bay, a position he held until his retirement in 1996. He was particularly proud of creating an entrepreneurial environment for his employees and establishing deeply rooted relationships with customers.

He was strongly dedicated to serving his communities. In Green Bay, John was involved in many civic activities, most notably as a member of the Executive Committee of the Green Bay Packers serving as Treasurer from 1990-2005; Chairman, Treasurer and Director of Bellin Memorial Hospital; and in Madison, a Director of the University of Wisconsin Carbone Cancer Center (where he was also a patient).

He typically described his job as a member of the Executive Committee as "the preservation of a national treasure." While his term coincided with the Packers' renaissance on the field, he focused on the other two legs of the "three legged stool critical to ensuring the long term success of the franchise," a metaphor John often used to explain the franchise's challenges. To that end, his most significant contributions to the Packers were as a driving force behind securing long term financial viability through Lambeau Field redevelopment and protecting league revenue sharing by reinvigorating the team's influence within the NFL through his heavy involvement on league committees dealing with revenue sharing, collective bargaining and competitive balance.

John is survived by his wife and best friend of 59 years, Gail M. (nee Schubert) Underwood, and his two sons, John (Betty) Underwood of Arlington Heights, IL and David (Deborah DeHaas) Underwood of Winnetka, IL. He loved and was fiercely proud of his grandchildren; Emily, Kelsey, Eric, Alex and Matthew Underwood.

The visitation will be held on Tuesday, September 1, from 4:00 pm to 8:00 pm at Proko-Wall Funeral Home, 1630 E. Mason St., Green Bay, WI 54302. Visitation will continue on Wednesday, after 9:30 am at First United Methodist Church, 501 Howe St. Green Bay, WI 54301, until time of service. Memorial service 11:00 am Wednesday at the church with Rev. David Wilkinson officiating. In lieu of floral expressions, donations may be made to either the University of Wisconsin Carbone Cancer Center, www.uwhealth.org/uw-carbone-cancer-center/cancer/10252, Bellin Hospital Foundation, www.bellin.org/bellin-foundation# or the First United Methodist Church of Green Bay, http://www.fumcgb.org/. On-line condolences may be sent to www.prokowall.com.


Published by Green Bay Press-Gazette from Aug. 27 to Aug. 31, 2015.
To plant trees in memory, please visit the Sympathy Store.
MEMORIAL EVENTS
To offer your sympathy during this difficult time, you can now have memorial trees planted in a National Forest in memory of your loved one.
Funeral services provided by:
Proko Wall Funeral Home
MAKE A DONATION
MEMORIES & CONDOLENCES
25 Entries
Condolences from the Krueger Family: Marge, Todd, Brian, Jay and Amy.
John will always be the "U" in BSRU. I will never forget my first hunt in Crivitz with dad, Erv, Frank, Cliff and of course John. Fond memories of all the good times shared in Hartford through the early years. May family and friends bring all of you comfort during this difficult time.
Brian Krueger
September 11, 2015
Much love and prayers for you Gail and your family. Wrapping my arms around you to give you hug.
Amy Maternoski
September 5, 2015
My deepest condolences to Gail and the whole family.
Ursula Rathie, Suamico and Sarasota, Florida
September 2, 2015
Dear Underwood family. Our sincerest sympathies on the passing of John. We will keep you all in our prayers. He certainly made a difference in this world.
Sue (Schaefer) and Paul Jahnke
September 1, 2015
Gail -

You are in my thoughts - as a child growing up just a few doors away from you and John - I have vivid memories of both you and John. I played in the court in front of your home for hours and hours - and I always was amazed at the amount of time the two of you would spend together. As a little girl, it caught my attention - look at those two - they spend so much time together, happy and sharing life. Thank you Gail for letting a little girl from up the hill watch a love story from afar.
Heather Resch Brimacombe
September 1, 2015
I worked at First Wisconsin/Firstar Bank for 18 years and through those years had a deep respect for Mr. Underwood. He was always a teacher and very respectful of every employee. My condolences to the entire family.
Patsy Peters
August 31, 2015
We will miss John and enjoyed our talks as he made his daily walk in the neighborhood with Gail and Rover.. Our thoughts and prayers are with you. Craig, Amy and Brayden Brown
August 30, 2015
Gail, Jack and David,
You have been in my thoughts and prayers these past few weeks. This is not an easy time for all of you but wonderful memories will help sustain you. Dorothy.Grandiine
August 30, 2015
Gail, John and David,
Thank you for opening your home and hearts to us. You and John made a huge impact on Regina and Bolor. I am not surprised by all he has done for others. He was a wonderful man with a huge heart. I pray your grief will be overshadowed by the loving memories you have shared all these years.
Nancy Huguet
August 29, 2015
Our condolences to Gail and family on the passing of a great Legend, in every
phase of his life. We knew him from the cottage next door at Lake Hilbert in Goodman. Our parents admired and treasured you as neighbors, and waited dearly for your visits with them. May God bless all of you.

Bill & Betty Wentland and family
August 29, 2015
So sorry to hear of his passing, John was the epitome of the words good neighbor to my Father and his brothers who were lifelong friends of this gentle man. Rest in Peace, John.
Stephenie Ambrose Tubbs
August 29, 2015
Gail and Family,
All of us at First Wisconsin/Firstar enjoyed a special learning, friendship, supportive environment with John. We will all miss him, but he will live forever in our fondest memories!
Chris Bauer
Chris Bauer
August 28, 2015
Gail, John will be greatly missed. He always made me smile no matter how bad of a day I was having. Your family is in my thoughts and prayers
Brenda Karl
August 28, 2015
I was John's barber for 5 years..Was such a nice guy and a true Gentle man. He will truly be missed. So sorry for your loss.
August 28, 2015
John's smile and laugh will forever be in my heart. I will cherish our conversations and the sincere advice he shared with me, as well as, a few good jokes. Thanks, John.
Kristine Klasen
August 28, 2015
Our condolences to the family. Wonderful man. Remember him being such a great neighbor to our parents on Lake Hilbert.
John & Kathy Wentland
August 28, 2015
Seeing the Underwood's was one of the highlights when we visited my folks (Harvey & Norma Jean Wentland)on Lake Hilbert. Gracious and caring best describe John & Gail. My folks always spoke with much respect when it came to the Underwood's. Little wonder the Packers are doing so well and are such a class organization. John was a significant piece of that organization. We had no idea John had such a varied past. Praying for Gail & the family. You have our deepest sympathies!
Richard "Curly" & Kathy Wentland
August 28, 2015
We at Goodmen Plumbing and HEating want to express our deapest and sincere sympathy to the family of John Underwood. He will be sadly missed.
Mike, Pam, Fran, Oscar, Phil, Scott and Randy.
August 28, 2015
Gail and Family- John was a very special person. He was my mentor for over 35 years and I would not be where I am today without his encouragement and support. He was one special man. Terri Trantow
August 27, 2015
We have missed him and will continue to miss him on his daily walks with Mrs. Underwood and Rover. Our deepest sympathies - the Voskamps and Max
August 27, 2015
John and Gail were my neighbors in Goodman on the lake. You couldn't ask for nicer people to live next to. I loved watching John throw tennis balls for his dog Rover and my dog Moses. he got a kick out of Moses going to get his ball and than rushing to get Rovers ball before he could reach it. John kept a log of when the ice went out every year and always let me know, even after my husband Roger died and I moved away. I'll always remember his warm smile and kindness.
Nancy Wolf
August 27, 2015
John Underwood was the most kind and caring heart. He was most fun on our Green Bay Country Club trips to Brewer Game's. You have to love a man that loves the American pastime!!
Beth Schmidt
August 27, 2015
My sympathies to the Underwood family. I met John while working at the YWCA during the time Gail served as President. Two truly kind and gracious people. May you find peace and comfort from family and friends. Sherry Towne
August 27, 2015
I met Mr. Underwood quiet a few years ago up north at Richard's Supper Club in Dunbar. Such a nice man, he left a lasting impression on me even only talking to him for such a short while. My sympathy to his family.
Jill Bielinski
August 27, 2015
John was the president of First Wisconsin bank when I started there at the age of 18. I will always remember his leadership - his knowledge, values and kindness was something that has helped formed my career over the last 35 years. Whenever I saw him even after retirment he would always ask about me and my family. He was a great man and will be missed.
Mary DeChamps
August 27, 2015
Showing 1 - 25 of 25 results