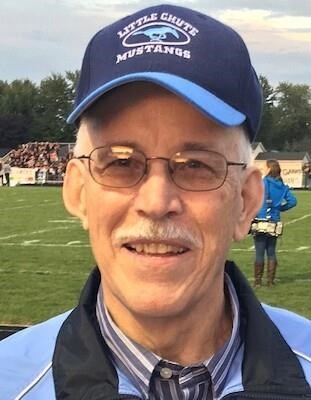 Green Bay - Michael J. "Mike" Baye, 75, passed away on July 14, 2021, with his children at his side. He was born October 11, 1945, to Wilfrid "Bill" and Leona (Rondou), the youngest of a set of twins and the baby of the family of seven children. Mike attended St. Patrick Grade School and graduated from Green Bay West High School. After graduating from high school in 1964, he served in the U.S. Air Force as a Signals Intercept Analyst, stationed in Texas for a year and later Germany for three years. We would tell you more about his military career, but that information is classified. After returning stateside, he received his Bachelor's and Master's Degrees in Education from U.W. Oshkosh, where when not studying he spent much of his free time at The Library.

On August 21, 1971, Mike married Mary Peters and the union was blessed with four children. In 1972, Mike began a long career in education in the Little Chute School System. He spent a short period of time coaching both high school track and basketball, but was especially proud of his 26 years of coaching Mustang Football where his players will remember his PhD in forearm shivers. He finally retired after his youngest son graduated in 1998.

On July 21, 1990, he married Karen Rygh at Calvary Lutheran Church. The couple loved planning get-togethers with family and friends and truly enjoyed hosting an annual Christmas party. They also enjoyed many trips to Door County to see the changing of the seasons and cheering on the Packers. Mike was instrumental in organizing Baye Family Reunions at Bay Beach and the West High Class of 1964 Reunions and communications. Mike took great pride in his four-year service to his country, but the thing he held dearest was the lifelong friendships he developed with his Air Force buddies. He cherished his Air Force Reunions. Mike looked forward to times he could spend with his children and adored taking care of the grandchildren. He and Karen could be found cheering them on at all of their events. In all of these adventures, Mike could be found with his camera on his neck recording the moment in film and favorite baseball hat on his head advertising his passions.

Always ready to lend a hand, Mike was a member of the Grumpy Old Men at Calvary Lutheran Church. While he would not want to be recognized, he was acknowledged, rewarded and appreciated by many for his selflessness. That giving spirit continued after his passing as Mike was a registered organ and tissue donor.

He was preceded in death by his beloved wife Karen on May 16, 2020; his parents, Bill and Leona Baye; his father-in-law, Roland Rygh; a sister and four brothers-in-law, Nancy and John Mersereau, Nicolas Meeuwsen, Norris Jones, and William Hendricks Sr. as well as a nephew, James Hendricks.

Visitation will be held from 4:00 to 8:00 p.m. Sunday at Proko-Wall Funeral Home, 1630 E. Mason St. Please feel free to wear your Mustang, Packer, Wildcat, or Air Force gear to honor your relationship to Mike. Visitation will continue from 9:30 to 11:00 a.m. Monday at Calvary Lutheran Church. A Funeral Service will be held at 11:00 a.m. Monday at the church with Rev. Jeff Fricke officiating. Full Military Honors will conclude the services. Entombment will be in Allouez Chapel Mausoleum. To send online condolences visit www.prokowall.com.

Published by Green Bay Press-Gazette from Jul. 15 to Jul. 16, 2021.
To plant trees in memory, please visit the Sympathy Store.
MEMORIAL EVENTS
Jul
18
Visitation
4:00p.m. - 8:00p.m.
Proko Wall Funeral Home
1630 East Mason Street, Green Bay, WI
Jul
19
Visitation
9:30a.m. - 11:00a.m.
Calvary Lutheran Church
WI
Jul
19
Funeral service
11:00a.m.
Calvary Lutheran Church
WI
Funeral services provided by:
Proko Wall Funeral Home
MAKE A DONATION
MEMORIES & CONDOLENCES
Sponsored by Proko Wall Funeral Home.
10 Entries
Sorry for your loss. Prayers for your entire family. He is leaving quite a legacy, filled with love and service. May God bless you all.
Kathleen
July 19, 2021
My deepest sympathy on your loss.
John Kafura
July 18, 2021
We will always remember Mike as a great teacher who loved his country and raised 4 amazing kids. Our thoughts and prayers go out for your family.
Dan and Elisha Kessler
Friend
July 18, 2021
So very sorry for your loss. My late husband and I went to UW-Oshkosh together with Mike and Joe. Mike's brother Joe and my late husband Jim were in the same fraternity. Both Mike and my husband were teachers and coaches. Mike was a dedicated teacher and coach I know. I have a twin sister like Joe and Mike were and it must be especially hard for your family. May you find comfort in each other. With deepest sympathy and prayers.
Gene Williamson Jacquet
Friend
July 18, 2021
We had the honor of living across the street from Mr. Mike and Karen for 10 years. Mr. Mike was such a sweet, kind man, and treated our boys like one of his grandkids. He captured so many pictures of our family over the years, and always printed them off and brought them over. We will deeply treasure these snap shots in time he gave us. Our thoughts and prayers are with the family.
The Reicks Family
Friend
July 17, 2021
There are so many great memories myself and my two sons have with both Mike and Karen. When they came down to Oregon and stayed with us for holidays, birthdays and just for the heck it. We always had a wonderful time. I always told Mike that my house was his free space. He could do whatever he wanted and did not have to listen to Karen. :) His stories were the best along with his love of South Park. He is truly going to be missed. God always takes the best way too soon!
Jodi Rygh
Family
July 16, 2021
We all lost a great man and friend. Mike you are now in heaven doing what you always loved and that is coaching the game of football and teaching young men the future skills of life. You will be missed but know you remain in our hearts.
Gary Romenesko
Friend
July 16, 2021
I had the pleasure of not only graduating with mike and Joe from west high, but also being a student of their brother Tom.....class acts all around.... so long my friend.... "never ask for whom the bell tolls...."
jim dillon
School
July 15, 2021
Mr. Baye was a great teacher. All around a nice person. My thoughts and prayers are with the whole family.
Helen E Altergott
July 15, 2021
Had the pleasure of meeting Michael at our home for Dacia and Dave's gender reveal party. With his camera in hand, he took many pictures of his family with love and happiness. We are truly grateful we had the opportunity to meat such a loving man.
John and Lynn Immel
July 15, 2021
Showing 1 - 10 of 10 results