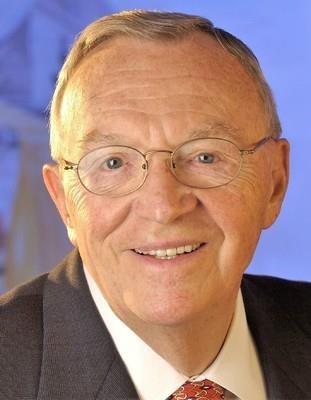 Bob was born in Cuba, New York on April 6, 1926 to Merlin George Bush (1903-1987) and Ruth Hunt Bush (1899-1991). From an early age Bob's interest in engineering was evident. While his friends were outside playing, he bought and experimented with an erector set and model airplane kits purchased with his magazine route earnings. At the age of 13, after multiple moves his family settled in Green Bay. He progressed to building and racing boats on the Bay and the Fox River in De Pere as he grew older. His family cottage at Shore Acres, near Dykesville, was so loved by Bob that later he personally built a cottage two doors away. Now his children, grandchildren and great-grandchildren return each summer to enjoy family and water fun!

After graduating from East High School in 1944, Bob joined the U.S. Air Force and due to his boating experience was assigned to be a crash boat pilot stationed in Florida. Following his service, he enrolled in the University of Wisconsin-Madison, where in 1950 he earned a bachelor's degree in Dairy Science with a minor in Mechanical Engineering. Months after graduating, Bob married the love of his life, Carol Adele Bickford, whom he met in high school. A family soon followed which grew to four children, 14 grandchildren and 16 great-grandchildren. Bob was known to light up when Carol entered a room, pausing meetings mid-sentence to say, "Hi pal." Their 69-year marriage was filled with love, respect and fun, a model for future generations of the family.

Following graduation, Bob began his full-time career at Schreiber Foods as a mechanic and played a key role in building the firm's capabilities. He designed and built several important pieces of equipment for which he holds 17 patents. These included the firm's first casting line, which automatically formed, stacked and sliced process cheese. Bob also designed the company's individually wrapped sliced process cheese equipment, using a "hot process", which fed cheese into the package in a hot state, and then flattened it into slices. He was pleased to learn decades later, the Schreiber process was just a bit faster than Kraft's "cold process". Bob advanced in the company, eventually serving as President, CEO, Chair of the Board and Chair Emeritus, and remained active in the firm for 65 years, retiring from Schreiber's Board of Directors in 2015. Bob believed in developing employees and creating an environment in which they thrived. His primary philosophies of integrity and continuous improvement were significant to the firm's character, growth and success.

Bob was passionate about and widely engaged in community service. He gave generously of his time and resources believing that solving problems was the key to fostering a great place to live. Many knew him as a person who could quickly distill an issue to its core and bring a creative idea or perspective to bear. Bob served on many boards including United Way of Green Bay, Green Bay Water Commission, Bellin Memorial Hospital, Junior Achievement of Brown County, Green Bay Symphony, Brown County Library, Greater Green Bay YMCA and several boards at the University of Wisconsin. Having served as Chair of the Encompass Board of Trustees, Bob along with Carol most recently served as Honorary Chairs of the Encompass For The Children Campaign.

He also received many awards, including the UW-Green Bay Hall of Fame, honorary degrees from UW-Madison, St. Norbert College and UW-Green Bay. Bob was honored by the National Cheese Institute with their Laureate Award which recognizes those who have made significant contributions to the development and growth of the cheese industry.

Bob was a fan - he loved the Indy 500, the UWGB Women's Basketball Team and the Badgers. But his favorite team was the Packers, and he was honored to have served for many years on the Packer Board of Directors. Bob chaired the board's search committee, which hired Bob Harlan as President. Harlan went on to restore the Packer organization to its winning ways! Bob and Carol also loved to travel. Carol has lovingly said, "He took me everywhere." Many photos Bob took adorn their home memorializing these adventures.

Above all else Bob valued family! He and Carol created a home life filled with activities, laughter and love. When his kids were young, he was seen flooding the backyard in winter to create an ice skating rink for his kids and the entire neighborhood to enjoy. Over the years he added lighting and music to that tradition. He taught countless people to waterski and sail at the cottage, and gathered the extended family for ski trips at Big Sky, Montana and fishing trips in pursuit of "the big one" at Lake Athabasca, Saskatchewan, Canada. Bringing family together and having fun was a priority for Bob, and he truly cherished this time.

Bob is survived by his wife, Carol, the most important person in his life, and their four children and families; daughter Tracy (Tom) Arndt and their children Jennifer (Chris) Woodruff, Jon (Jenni) Arndt and Jay (Lindsay) Arndt; son Terry (Nan) Bush and their children Lindsay (Tommy) Velarde and Nicholas (Amanda) Bush; son Tom (Sue) Bush and their children Christopher, Brian (Melissa Milich), Michael and Katherine Bush; and daughter Toni McBride and her children Molly, Cathryn and Sarah McBride; and great grandchildren Olivia, Tate, Carter, Ava and Chase Woodruff; Mason, Merrick and Blake Arndt; Sullivan and Calvin Arndt; Alaura, Hudson and Arlow Velarde; Allison and Annabelle Bush; and Brandon Bush. He is further survived by his sister Virginia (Roy) Zimmer and many nieces and nephews. He was preceded in death by his grandchildren Allison and Austin Bush, and his brother and sister-in-law Richard and Joyce Bush.

An uncommon gentleman, Bob was greatly loved and will be dearly missed by his family and friends. His quick wit and smile, his positive outlook, and his passion for problem solving and helping others will live on with all who were fortunate to know him.

Memorials in honor of Bob may be made to the Carol and Bob Bush Legacy Fund at Encompass Early Education & Care, P.O. Box 1627, Green Bay, WI 54305.


Published by Green Bay Press-Gazette from Oct. 11 to Oct. 20, 2019.
To plant trees in memory, please visit the Sympathy Store.
MEMORIAL EVENTS
To offer your sympathy during this difficult time, you can now have memorial trees planted in a National Forest in memory of your loved one.
Funeral services provided by:
Ryan Funeral Home & Crematory
MAKE A DONATION
MEMORIES & CONDOLENCES
Sponsored by Ryan Funeral Home & Crematory.
6 Entries
What a great Uncle! Always positive supportive and engaging! How lucky to spend time w/ him and his family! Last time I saw him he caught me off guard when I asked him how he was-... I'm still here. Yes and what a pleasure it was ! Thank you Bob ! Will miss you......Jay
Jay Bickford
October 27, 2019
Tracy was my best friend in grade school. Aunt Bickie and Uncle Bob were my self appointed adopted parents. There was so much love and laughter in the Bush household that it was impossible to stay away. Uncle Bob was kind and loving, treating me like part of the family both in Allouez and Shore Acres. My father, Emil, and Bob were fast friends and long time business associates. The Fischer and Bush family were intertwined. I know he will be greatly missed by his entire family, his friends and especially his loving wife Carol, my Aunt Bickie. Love to all.
Laura Fischer
Friend
October 27, 2019
Carol and family. Thank you for sharing Bob with us. He was a great man with passion and energy to help others to be their best. He will be cherished and missed forever. With deepest sympathy.
Steve Shelley
October 21, 2019
Carol, and all the family:

So sorry to hear of Bob's passing, and know that he made a big influence on all he met. The time at Union UCC was special when you both contributed so much.
I know that Bob will be sadly missed, but he will be so joyfully remembered!
Chuck Patton
October 19, 2019
Bush family,

Please accept my deepest sympathy in Bob's passing. He was a great man whose zest for life was contagious.

It is my prayer that you all find comfort in wonderful memories and our Lord's promise..."absent from the body; present with the Lord."

Blessings,
Kathy Butterfield
October 18, 2019
Mr. Bush was a very special person. Our father, Tom Krautkramer, was so fortunate to work for him during his time with Schreiber. He was a wonderful mentor and friend to Tom and our family. The Green Bay community is a wonderful place to be, in large part, because of Mr. Bush. Our thoughts and prayers are with you all.
Tom Krautkramer and family
October 16, 2019
Showing 1 - 6 of 6 results