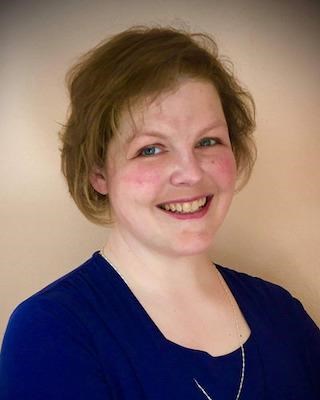 Green Bay - On March 26, 2021, Sara Jean Holub passed away from natural causes at the age of 40. She was born on February 16, 1981 in Appleton, Wisconsin and was baptized and confirmed at St. John Lutheran Church, Appleton.

Sara attended Seymour High School where she excelled in choir and musical theater. She also participated in band, forensics, basketball and was a member of the National Honor Society, having graduated in the top ten of her class.

Sara completed her undergraduate degree at Valparaiso University, with a double major in choral and instrumental music education. She was a member of the Christ College Honors Program and directed the Sigma Alpha Iota choir. She also co-directed pep band. Sara obtained a master's degree from Fielding Graduate University. She also completed her National board certification in music education.

Sara taught middle school choir at Pulaski Middle School and JR Gerrits Middle School in Kimberly. For the past six years, she directed choir and several award-winning musicals at Preble High School in Green Bay. Sara served on the board of directors for the Wisconsin Choral Directors Association and was voted Outstanding Young Choral Director for the State of Wisconsin. This year, Sara was named a teacher of distinction in the Golden Apple Award program.

Sara realized a lifelong dream by winning a spot in the Jeopardy Teachers Tournament where she reached the semifinal level. Sara excelled in NRA and CMP service rifle competition. She won the Women's National Championship in the 2020 Civilian Marksmanship Program Home Range Series. She is a current board member and was a past-president of Wisconsin Firearms Owners. Along with her father, she coordinated the State of Wisconsin Junior Service Rifle Team.

Sara was a bright light to all who knew her and will be remembered for her strong faith, beautiful smile, and kind nature.

She is survived by her parents, David and Deborah Holub; a brother, Neil (Michelle) Holub; many aunts, uncles, cousins, friends, and her beloved fur baby, Annie.

Sara was preceded in death by her grandparents: Charlotte and Sylvester Holub, and Calvin and Delores Spice; two uncles: Rev. Gerald Spice and Dennis Spice; and an infant sister.

Visitation for Sara will take place on Saturday, April 3, 2021 at the Fox Valley Lutheran High School Auditorium, 5300 N Meade St. Appleton, WI 54913, from 10 am until the memorial service at 12 noon with Pastor Mark Gartner and Pastor Andrew Frey officiating. Social distancing and face coverings will be required.

In lieu of flowers, a memorial fund will be established in Sara's memory to be used for music education and her faith.

Muehl-Boettcher Funeral Home, Seymour, is assisting the family with arrangements. Online condolences may be expressed at Sara's family at www.muehlboettcher.com

Published by Green Bay Press-Gazette from Mar. 29 to Mar. 30, 2021.
To plant trees in memory, please visit the Sympathy Store.
MEMORIAL EVENTS
Apr
3
Visitation
10:00a.m. - 12:00p.m.
Fox Valley Lutheran High School Auditorium
5300 N Meade St., Appleton, WI
Apr
3
Memorial service
12:00p.m.
Fox Valley Lutheran High School
5300 N Meade St., Appleton, WI
Funeral services provided by:
Muehl Boettcher Funeral Home
MAKE A DONATION
MEMORIES & CONDOLENCES
Sponsored by Muehl Boettcher Funeral Home.
4 Entries
David and family,
We are so sorry to hear of Sara's passing. Our thoughts and prayers are with you during this most difficult time. Heaven has a bright new angel amongst them.
Craig (Stormie) and Holly Storm,
Brown County Shooting
holly storm
Acquaintance
April 1, 2021
Our thoughts and prayers are for Sara and the Holub family. May precious memories bring you some comfort during this difficult time.
Kristy and Ted Sutrick
March 30, 2021
May God bless you and your family in this time of sorrow. One thing is for sure that we will see Sara at the gates of heaven. When it is our turn to go!
God's Love and blessing to all!
Randall Gregory
Friend
March 29, 2021
Sara, you were a beautiful young woman, inside and out. You helped numerous young people the value of music. RIP Sweet Woman. Thoughts and prayers to Sara's family, friends and students
Linda
March 29, 2021
Showing 1 - 4 of 4 results