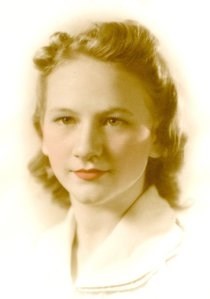 Ada Emeline Oliver Burge died on February 11, 2021 at Moses Cone Hospital in Greensboro, North Carolina. She was 97 years old and had been in declining health for several months.

Ada was a graduate of Sumner High School, where she was senior class president, and attended High Point College (now University) before marrying Les Burge, a professional baseball player, on December 25, 1941. After the end of World War II, Les resumed his baseball career for several years, with Ada and later their sons, accompanying him to Montreal, Canada; Fort Worth, TX; and Shreveport, LA. Upon Les' retirement, the family settled in High Point, where Ada owned and operated two ladies dress shops, Ada's Shop and The Style Boutique, for a combined total of 33 years. During those years, she honed her skills as an astute business person and a woman with an excellent sense of fashion.

Ada and Les were active members of First United Methodist Church in High Point, where she was involved in numerous church activities, including United Methodist Women, Parson's Table, Finance Committee and the Family Fellowship Sunday School class. They were also accomplished golfers as well as members of Club 30, a ballroom dancing group.

For the last 25 years of her life Ada was a resident at River Landing at Sandy Ridge in Colfax, NC. During those years, she was involved in many activities, including serving on the planning committee for the new facility and winning the women's billiards championship. For 15 years she also "played" the washboard and rain stick for the Presbyterian Homes of HP band and demonstrated her ballroom dancing skills while the band played. Perhaps one of her most noteworthy accomplishments was serving as an unofficial ambassador in welcoming new residents to River Landing. She was noted for taking new residents "under her wing" and helping them socially adjust to their new environment.

Ada's love of family and joie de vivre were cornerstones of her life. Her caring nature, kind spirit and positive outlook made her beloved by all those who were fortunate enough to know her. She will be greatly missed.

Interment will be at Guilford Memorial Park in Greensboro, NC with a celebration of her life to be held at a later date. Gifts in Ada's memory may be made to the Property Maintenance Fund at First United Methodist Church, 512 N. Main Street, High Point, NC 27260 or to River Landing at Sandy Ridge, 1575 John Knox Drive, Colfax, NC 27235.

The family extends special thanks to the pastors and congregation of First United Methodist Church for their love and support and to the staff at River Landing for their highly skilled and compassionate care, especially during the last several years of Ada's life. The support and love that they provided to her and her family are an example of what everyone hopes their aging loved ones can experience.

Online condolences may be made for the Burge family at www.sechrestfunerals.com.
To plant trees in memory, please visit our Sympathy Store.
Published by Greensboro News & Record on Feb. 14, 2021.
MEMORIAL EVENTS
No memorial events are currently scheduled.
To offer your sympathy during this difficult time, you can now have memorial trees planted in a National Forest in memory of your loved one.
Funeral services provided by:
Sechrest Funeral Service
GUEST BOOK
Sponsored by Sechrest Funeral Service.
1 Entry
Rick I always have good memories of your mother and father together They were a great couple and always left a place better than it was beforehand! Thoughts and prayers for all of you . Take care
Robin Rice
February 14, 2021