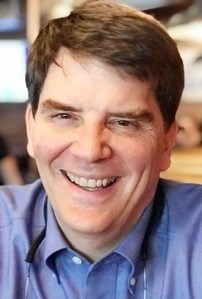 Brent was born in Greensboro, North Carolina. Growing up, Brent quickly began to manifest the aspects of his personality and character that defined the outstanding man that he became. In high school, he was an ideal student. He participated in activities such as Muscular Dystrophy Association and Boy Scouts (Eagle Scout). Most importantly, he was active in Greensboro Youth Council, where he met his future wife, Cindy. They both attended UNC-Chapel Hill, where Brent managed to attend every home basketball game of his undergraduate career. He graduated with a BS in business administration with a concentration in accounting. He married Cindy a month later in 1984.

After graduating, Brent and Cindy moved to Honolulu, where they lived for six years. In Hawaii, Brent and Cindy had wonderful adventures, made lifelong friendships, and started their careers.

Brent and Cindy returned to North Carolina in 1990. They raised their children (daughter Emma, born in Hawaii, and son Benjamin, born just after their return to North Carolina) in the Chapel Hill/Durham area. Brent was born to be a fun Dad. Emma and Ben were the unquestioned focus of his life; he delighted in them every day. The family was deeply involved at Chapel Hill Bible Church.

Brent pursued his professional life as an accountant with zeal, integrity and vigor. He was a compassionate and thoughtful co-worker, and was amazing in his ability to consider all sides of issues. Most recently, Brent worked at Trinity School of Durham and Chapel Hill, where he served as director of finance. As with all of his other jobs, he was beloved by his co-workers and devoted himself completely to the work at hand.

Brent loved his community well, from his mom and siblings to extended family, friends and neighbors. His in-laws loved him as one of their own.

There are so many things about Brent that showed what an amazing person he was. He loved games. He always did the right thing. He took care of everyone. He was profoundly honest, dependable, affirming, and creative. His faith was paramount to him; he lived it every day, grew from and with it, and found joy and peace in it.

A celebration of life service will be held on Thursday, June 17 at 2 p.m. at the Chapel Hill Bible Church.

Donations may be made to either to the Trinity Forward Campaign (Niesha Campbell, [email protected]) or the Chapel Hill Bible Church.
To plant trees in memory, please visit our Sympathy Store.
Published by Greensboro News & Record on Jun. 18, 2021.
MEMORIAL EVENTS
No memorial events are currently scheduled.
To offer your sympathy during this difficult time, you can now have memorial trees planted in a National Forest in memory of your loved one.
MAKE A DONATION
MEMORIES & CONDOLENCES
4 Entries
Brent and I began school together at Irving Park (actually kindergarten even before starting 1st grade at Irving Park) and finished together in the accounting program at UNC. We actually started our work careers at the same firm, but Brent of course decided to relocate to Honolulu with Cindy. We lost touch, but I was delighted to have a chance to speak to him from time-to-time after they returned to Chapel Hill. What always comes to mind whenever I think of Brent, and these thoughts have been consistent throughout the span of decades that we knew each other, is that he is one of the most decent, upstanding and nicest people I have ever known. I would have said this if you asked me about him in elementary school, high school, college, and I would say that now. I was indeed so sad to learn of his passing and the lose this represents for his family. My heartfelt sympathy to all his family.
Wes Watson
Friend
July 6, 2021
I am very saddened by this news. Although I did not see Brent a lot I considered him a good friend and fellow brother in Christ. He was quick witted, smart, humorous and all this wrapped in integrity. I will never forget his distinctive voice. I pray Cindy and their children find peace in knowing that their dad (and Cindy´s husband!) lived a life of integrity, honor, faith and kindness. I cannot think of a better epitaph than that. Well done faithful servant of Christ! Godspeed Allen Samuelson Chapel Hill, NC
Allen Samuelson
June 30, 2021
I am so sorry to hear about Brent. I volunteered with him at MDA camp for approximately ten years. He showed his compassion for others even at a young age. He was one of the youngest cabin leaders we had and was loved by everyone. I hope you all find comfort in knowing he is at peace and even though his journey on earth was short, he made a difference in many lives.
Jimmy Johnson
Other
June 24, 2021
Brent always made me laugh, and he was a wonderful husband for my childhood friend Cindy.
David
June 18, 2021
Showing 1 - 4 of 4 results