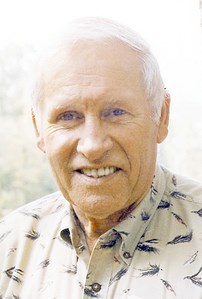 Eddie C. Bridges, age 87, of Greensboro, completed his earthly journey on May 18th, 2021 and moved on to higher ground.

He was born on June 5,1933 in Morganton NC (Burke County), the son of Plato Durham Bridges and Iva Singleton Bridges, both now deceased.

He graduated from Morganton High School in 1953, where he was an outstanding athlete, playing football and baseball. He served as captain of both sports, earned all conference and all state recognition and played in the 1953 Optimist Bowl.

He attended Elon College (Now Elon University), where he continued to excel in sports. He played both Football and ran track and field. He especially excelled at track, were he was the first person in Elon history to run the 100 yard dash under 10 seconds, with a time of 9.8 seconds. In a single meet, he established three new school records in the 100 and 200-yard dashes and a leg of the mile relay. In 2003, he was honored by Elon University with the Distinguished Alums Award.

When Eddie completed his two terms on the NCWRC in 1989, he created the North Carolina Wildlife Habitat Foundation, which is modeled after the endowment fund and generates money to help improve wildlife habitat all across North Carolina.

Eddie stated, "Divine Order has taken care of a lot of stuff for me," and "The Lord has blessed me in a multitude of ways. Lots of great things have happened to me. I feel really honored and grateful, and to be 87 years old and still getting those nice blessings is pretty remarkable."

A celebration of life service will be held at the Grandover Resort on Wednesday, June 23, from 3 to 5 p.m.

You may send memorable photos of Eddie or a message to the family.

In lieu of flowers, memorial contributions may be made to NCWHF (Eddie C. Bridges Legacy Memorial), P.O. BOX 29187, Greensboro, NC 27429 or the Sid Varney Scholarship at Elon University.
Published by Greensboro News & Record from May 26 to May 30, 2021.
To plant trees in memory, please visit the Sympathy Store.
MEMORIAL EVENTS
Jun
23
Celebration of Life
3:00p.m. - 5:00p.m.
Grandover Resort
NC
MAKE A DONATION
MEMORIES & CONDOLENCES
16 Entries
I met Eddie once. I bought one of the commemorative knives he created and sold for NC Wildlife. He spoke with me for a long time about his work and I could see his passion for wildlife. I am sure he touched many people in his life and you all should be proud of his legacy. Sympathy for his family and friends.
Kathy Craft
Other
June 7, 2021
Thanks Eddie for coming up with the lifetime sportsman license in N C it has been used in our family in the year it started , you will be greatly missed buddy.
Ken Pope
Friend
June 5, 2021
Thanks Eddie , we had some great duck hunts at Lake Townsend , I know how much you wanted that #4 blind , thank you for selling me your 8 cork decoys that you put out every Saturday, they are still being used and are still working. I will miss seeing you and that big grin you had. RIP.
Ken Pope
Friend
June 5, 2021
Thank you Eddie Bridges for a job well done, our deepest sympathy goes out for your family.
Keith Axsom
June 5, 2021
RIP!
Jack Lamb
June 5, 2021
May God grant Mat God grant Eddie Everlasting Peace. To his family I offer my deepest condolences. ODAAT
james bender
Other
June 5, 2021
THANK YOU EDDIE FOR ALL YOU DID FOR WILDLIFE IN NORTH CAROLINA. ALL GOOD MEMORIES OF OUR DUCK HUNTING AT LAKE BRANDT AND TOWNSEND IN THE 60,S 70,S AND 80S. SEE YOU ON THE OTHER SIDE WHEN MY TIME COMES
RICHARD HARTMANN
Friend
June 1, 2021
Thanks Eddie on behalf of The Varney boys.
Bess and Jim Hawkins
School
May 31, 2021
To All You Children and Grands .... Eddie was such a fine man .... he was around during a long period of my youth and early adulthood and I enjoyed being with him thoroughly. I especially recall a delicious meal he and Nancy cooked for all the LoRe Clan ... I am glad for him, and sad for you, that his leave taking from this world was so fast .... he is in better hands now ... with love and sadness that a friend has moved on - Cousin Page
Page Montgomery LoRe
Family
May 30, 2021
I finished high school in Morganton with Eddie. I have a Blue Bird House I won at one of our class reunions. I cherish it along with memories of Morganton High School. He will remembered by lots of folks.
Lucille Whisenant May
School
May 27, 2021
As a classmate at Morganton High, I send my sincere condolences to each of the family. He left a lifetime legacy.
Reba Reece
School
May 27, 2021
Rest in peace Eddie .You were a great teammate at Elon. You are one of the unforgetable people in my life. Bob and Pat Kopko
Robert JAMES Kopko "KOP"
School
May 26, 2021
Can't think of another Man that has touched as many lives as Eddie Bridges. Our Nation, our State, our Local Community, and our Youth have all benefited from Eddie Bridges tireless efforts to make this world a better place! Mission Accomplished!
Jim Donaldson
Friend
May 26, 2021
My deepest condolences to Eddie´s family. What a life well lived unselfishly. A great attitude and kindness to all he met. I am blessed to have known him.
Mary Rakestraw
Work
May 26, 2021
I met Eddie when I owned J Harold Smith Framing and Art and would always donate a Bob Timberlake framed print to whatever he was promoting at the time. A real gentleman and always upbeat. I last saw him at a bank about two years ago. Had not seen him since around 2014. He still remember me and also my name. Same great gentleman! RIP
Chuck Cranford
May 26, 2021
Eddie was also a great friend. He treated everyone he met as if he had known them for a long time. He will be missed in our community. My sympathy to his family.
Henry Isaacson
Friend
May 26, 2021
Showing 1 - 16 of 16 results