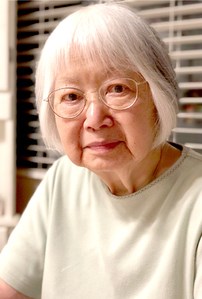 Esther Chou passed away peacefully on February 16, 2021 at the age of 95. She will be remembered by many in the Triad area as the co-owner of Jung's Chinese restaurant located on N. Church Street in Greensboro.

Many school children, faculty and staff at David Jones Elementary and Canterbury schools know Esther from her volunteer work in their media centers throughout the 80s and 90s, for which she received the 1992 "Guilford County School System Volunteer of the Year Award." When she herself was a senior, Esther volunteered delivering mobile meals.

Fellow residents of the Pennybyrn independent living community in High Point will remember long-time resident Esther for her sharp wit and outstanding ability to recognize and remember faces, names and stories of all she met.

From the time she was a little girl, Esther loved movies and could recognize actors from a glimpse on the screen. She attended plays on Broadway, and attended concerts and cultural events in the Triad area.

Esther's parents were Tong Wong Jung of Oofook, Hoisan, Guangdong province in the People's Republic of China and Gook Gee Lee of Pahala, Hilo, Hawaii. Her family owned and operated the Wah On Noodle Factory and the Chicago restaurant in Norfolk, Virginia from the 1920s to the 1950s.

Following the loss of their mother in 1965 she, four of her siblings and their families relocated to Greensboro, North Carolina and opened a restaurant together. Eventually, groups of the siblings opened separate restaurants in Greensboro and Raleigh, NC. Esther and sister Elizabeth operated Jung's Restaurant at 314 N. Church Street in Greensboro until Elizabeth passed away in 1981.

An avid traveler, Esther went on several globe-trotting adventures with friend Betty Kusenberg. Their destinations included the Soviet Union, Spain, Morocco, Brazil, Argentina, and Paraguay. With her son and in-laws she traveled China, Western Europe, the Caribbean, Australia, New Zealand, the United States, including Alaska and Hawaii. She was a fun travel companion and a good sport.

Esther will be remembered as a loving and caring mother, mother-in-law, aunt and cousin. Friends and acquaintances will remember her as a sweet and kind soul. She will be missed.

A virtual memorial will be held; details will be updated here: http://usefulbulk.com/esthermemorial/.

Esther's final resting place will be Forest Lawn Cemetery in Greensboro, NC alongside her sister Elizabeth.

In lieu of flowers, the family would appreciate your donations to: Canterbury School Library, 5400 Old Lake Jeanette Rd, Greensboro, NC 27455, "In memory of Esther Jung Chou." Online donations may be made in her name at https://canterburygso.org/giving/give-online/
To plant trees in memory, please visit our Sympathy Store.
Published by Greensboro News & Record on Feb. 28, 2021.
MEMORIAL EVENTS
No memorial events are currently scheduled.
To offer your sympathy during this difficult time, you can now have memorial trees planted in a National Forest in memory of your loved one.
GUEST BOOK
3 Entries
I am so sorry to hear of Ester´s passing. I worked at Jung´s which was my first Job in 1975 as a bus person. Ester was always sweet to work for. In 1976 -1978 worked as a waitress and loved working for Ester and Elizabeth. I remember Ellsworth and how special he was to his Mom, Aunt and work staff. RIP Sweet Ester. Ellsworth you were blessed to have a loving strong Mother in your life. May the beautiful memories help you through this difficult time. May God bless
Sherry Cheek Sherman
February 28, 2021
My mother grew up on Holt street and went to Ruffner and Maury and was also a . She often mentioned her friend and classmate Ester Jung who was also an honor roll student . She

My mother Mary Anderson Verykoukis grew up on Holt Street and went to Ruffner and Maury. She often mentioned her friend and classmate Esther Jung, when proudly recalling their commonality of being honor roll students and the children of immigrants. May their memory be eternal.
Georgia Rosenberg
February 28, 2021
Going to Jung's Restaurant on Church Street was always a special event for my family and friends. I'm sure many others felt the same.
Martha Sparrow Ferrell
February 28, 2021