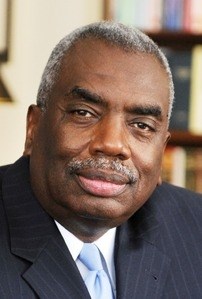 George Robert Johnson, Jr. was born in Columbus, GA, on February 25, 1951, to the late Jimmie Lee Hunt Johnson and the late George R. Johnson, Sr. He departed this life on November 15, 2020, after a courageous battle with lung cancer.

He attended the public schools of Columbus, graduating from Carver High School in 1969 as class valedictorian.

George left Columbus in the fall of 1969 for Amherst College, graduating in 1973 with a bachelor of arts in American studies. While at Amherst, he played an active role in the Afro American Society, was vice chair of The Amherst Student, the college newspaper, and was class speaker at graduation. After Amherst, George matriculated at Columbia Law School, earning his juris doctorate in 1976.

Johnson started his legal career as assistant counsel for the U.S. House of Representatives Committee on Banking, Finance and Urban Affairs. The Carter administration welcomed him to the Executive Office of the President in 1979 as assistant general counsel for the White House Council on Wage and Price Stability.

His teaching career began in 1981 as a faculty member at George Mason University School of Law. In 1988, he joined Howard University School of Law as a visiting professor. He went on to become the associate dean for academic affairs in 1992. George served from 1996 to 2002 as president of LeMoyne-Owen College in Memphis, Tennessee. He then entered private practice in 2003 at Saint Louis & Johnson law firm in Washington, D.C.

George joined the founding faculty of Elon University School of Law in 2006. He then served as the school's first associate dean of academic affairs. In 2009, he was named dean of the law school. It was under George's leadership that the law school received full accreditation from the American Bar Association. He remained dean until his decision to return to the faculty ranks in 2014.

Earlier this year, George was named as one of five 2020 Legal Legends of Color, a recognition bestowed by the North Carolina Bar Association's Minorities in the Profession Committee. He was board chair of the National Center for Community and Justice (NCCJ) Greensboro, a member of the board of Triad Stage, as well as Greensboro College, and his alma mater, Amherst College. He was also a member of Alpha Phi Alpha fraternity, and Beta Epsilon Boule of Sigma Pi Phi. A devout Christian, George chaired the Deacon Board at Shiloh Baptist Church (Washington, D.C.), and served on the Board of Trustees. He was also a member of the Deacon Board at Providence Baptist Church, in addition to several other service positions throughout his life.

He leaves behind to cherish his memory his wife, Linda; their son, William (Kerry), and two grandchildren, Nina and Theodore. They mourn his passing alongside three sisters, Brenda Powers of Decatur, GA, Barbara Ann Johnson of Columbus, GA and Carolyn Edmonds of Atlanta, GA; one brother, Michael Johnson of Columbus, GA, and a host of other relatives and friends.

Please accept my heartfelt condolences in the loss of your dear brother. I never met George, but I know he impacted many lives for the better. A Law Legend! May God's presence comfort your family during this time of grief.

HUGS
Oberon Matheny
Friend
November 25, 2020
George was a classmate from Elementary, Middle, GWCHS, my neighbor and friend. Always polite, well spoken and his intellect was above and beyond!! He was our graduating class recepient, MOST likely to succeed and other awards academially over our course of our education in Columbus, GA..GONE BUT NEVR TO BE FORGOTTEN!!
Ruth Sparks-Anderson'69
Classmate
November 23, 2020
Professor Johnson was my Constitutional Law professor at George Mason University School of Law. Not only was he a fascinating instructor, he had a lasting influence on my career. I was fortunate to catch up with him a couple of months ago and he was, as always, gracious. Even early in Professor Johnson's career, one could see the brilliance, intellect, and vibrancy that inevitably led to the distinguished career he built. My deepest sympathy to the family on the loss of this wonderful, impactful person.
David A. Hirsch
Student
November 23, 2020
As the days and weeks pass, and as you return to life's routine, may you continue to feel comforted by the love and support of family and friends.
Cynthia D. Jones
Classmate
November 21, 2020
Linda, Our sincere sympathy is expressed to you and your family during your time of bereavement. You are in our prayers.
NLN Leadership Institute _Dr. Janice Brewington and Staff
November 21, 2020
November 20, 2020

Our Deepest Sympathy to you on the passing of Dr. George R. Johnson, Jr. As a Fraternity Brother, we will never forget his Scholarship, Love for Mankind, and Leadership. I was honored to join his faculty at LeMoyne-Owen College in Memphis, TN. and will cherish the opportunity to serve under him. We pray God’s Comfort in the days to come.
Dr. Stephen and Shirl Hayes
Friend
November 20, 2020
May your hearts soon be filled with wonderful memories of joyful times together as you celebrate a life well lived. Rest In Peace.
Andretta Bryant
Family
November 20, 2020
He was a good man and a friend. He roomed in my house his first year in Greensboro and I later sought his advice. God bless.
Larry Wells
November 20, 2020
Linda and family, please know that our sincere condolences are sent to you at this very difficult time. George was such a wonderful church family member and we really appreciate all that he did in the short time he was in leadership rolls there. Know that memories are yours to keep and on those days when it seems difficult to move forward, know that his spirit is there and so many lives were touched by George. We will miss him and that easy going nature. We will miss having him to share his knowledge and advice. God needed that more.
Bernard & Cecelia Shaw
November 20, 2020
You have ran the race, and have finished the course, kept the faith To GOD be the glory Your Uncle
Alfred Hunt
November 20, 2020