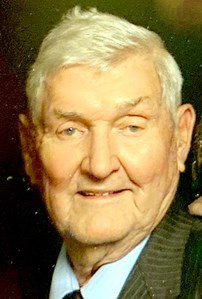 After his service in the Korean War, Henry graduated from North Carolina State University, Raleigh, N.C., in 1957.

He was a member of Jamestown United Methodist Church and former member of Hawfields Presbyterian Church. Henry worked in the research department of Burlington Industries until his retirement in 1993 and owns Pine Lake Mobile Home Park, Mebane, N.C.

Henry enjoyed helping others, forestry, traveling, vacationing at Ocean Isle Beach, N.C. with his wife and family and being involved in his grandchildren's lives.

Those who wish to pay their respects to Mr. Henry Scott may visit from 2:30 to 5:00 p.m., Monday, September 14, at Hanes Lineberry Sedgefield Chapel, 6000 West Gate City Boulevard, Greensboro, N.C.

The family wishes to express heartfelt thanks to the nurses and staff at Pennybyrn for their care of Henry.

In lieu of flowers, memorial contributions in Henry's memory may be made to the charity of one's choice.

Online condolences may be shared by visiting www.haneslineberryfhsedgefield.com.