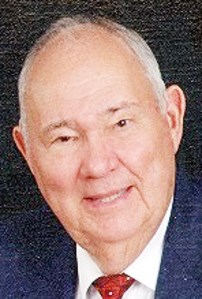 Greensboro—Jerry Lamont Troxler, 88, entered eternal rest July 17, 2021 at Ashton Health and Rehabilitation, Burlington. He was born in Greensboro to the late John Frank Troxler, Jr. and Virginia Hord Troxler. Upon graduation from Greensboro Senior High School, Jerry enrolled at North Carolina State University in the engineering department. After college, he enlisted and served in the United States Air Force, where he shared many stories of his time stationed in the Azores. After the military, he became the president of Dixie Machine and Tool Company.

Jerry's love for mechanics and planes also carried over to his interest in antique cars. He served as master judge for Antique Automobile Club of America and became a member as well as president of the General Green Car Club. He served the Greensboro community with his interest as a Jaycee inspector of cars for the Annual Soap Box Derby for three years.

Jerry's community service did not end there. He was a very active member of West Market St. United Methodist Church where he served as a board member, president of the Junior Board, and spent 20 years as a mission volunteer to Caribbean countries as well as 10 years volunteering in building and repairing churches in the Western NC UMC. You could often find Jerry doing many projects at Camp Tekoa, a mission that was very dear to his heart. This service earned him the nickname "Mr. Fix It."

The family will receive friends at the West Market Street United Methodist Church on Saturday, July 24 from 1 to 3 p.m. A memorial service will be conducted at 3 p.m. in the church sanctuary with Reverend Jill Alventosa-Brown officiating. The family requests that memorial contributions be made to West Market St. United Methodist Church Music Fund.

To plant trees in memory, please visit our Sympathy Store.
Published by Greensboro News & Record on Jul. 22, 2021.
MEMORIAL EVENTS
Jul
24
Visitation
1:00p.m. - 2:45p.m.
West Market Street United Methodist Church
302 W, Greensboro, NC
Jul
24
Funeral service
3:00p.m.
West Market Street United Methodist Church
302 W, Greensboro, NC
Funeral services provided by:
Forbis & Dick Funeral Home - North Elm Chapel
MAKE A DONATION
MEMORIES & CONDOLENCES
Sponsored by Forbis & Dick Funeral Home - North Elm Chapel.
2 Entries
Dear Jerrilyn, Imogene, and Cedelle, We are sending you all much love, prayers, and light at this time to be with you throughout the following days. Your father was a kind and loving man, and we enjoyed all our times spent with Jerry and Patricia throughout the years. They were just a lovely couple, and always welcoming. Your Dad had the best story's and always so jovial. He loved all his girls, that's for sure, and he loved Ms. Patricia and was never afraid to show his affection . They were just the loveliest couple. We are holding you all in our hearts today and throughout the days to follow. With our sincere condolences to all of you. Stanley and Linda Everette
Linda G Everette
Family
July 24, 2021
Mr. Troxler was a very helpful and caring man! I will always be grateful for what he has done for me and for me and my husband! He and his wonderful wife will always be in my thoughts! Love him Mrs. Troxler and the whole family!
Sherra McCraw Stone
Friend
July 22, 2021
Showing 1 - 2 of 2 results