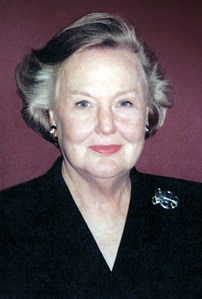 Dr. Jo Watts Williams, 92, who spent more than 75 years dedicated to building Elon University and contributing to the quality of life in Alamance County, died Thursday, September 16, 2021, at her home in Burlington, North Carolina. A funeral service will be at 2:00 p.m., Monday, September 20, 2021, at First Presbyterian Church, 508 West Davis St. Following the service, at 3:30 p.m., the family will receive friends at The Inn at Elon, 605 N. O'Kelly Ave., Elon, N.C. A private committal service for the family will be held at Magnolia Cemetery in Elon.

Dr. Williams was born on May 26, 1929, in the White Store community of Anson County, N.C., the youngest of eight children of James C. Watts and Blanche Rogers Watts. Neither of her parents had attended college, but they were committed to the importance of education. They raised money to hire a teacher for the town's school and ensured that all of their children attended college.

Following her graduation from Deep Creek (N.C.) High School, Williams followed the path of all of her siblings, enrolling in Elon College in 1945. During her college years, she met fellow Elon student William Leaford Williams Jr., and the two were married on June 13, 1948. She combined her studies with work, serving as secretary to President Leon Edgar Smith for four years. She completed her bachelor's degree in elementary education and graduated from Elon in 1955.

Following college, Williams spent 14 years as a public school teacher in North Carolina, working in Alamance County Schools, Concord City Schools and Burlington City Schools. She was a Teaching Fellow and earned her master's degree in education at the University of North Carolina at Greensboro in 1971 and a doctorate at UNCG in 1973.

In 1969 President J. Earl Danieley recruited Williams to accept a position on the Elon College faculty in the Department of Psychology and Education. She advanced from instructor to the rank of professor, and in 1977 was named associate dean of academic affairs and director of the Learning Resources Center. Two years later, President J. Fred Young appointed Williams director of development and soon promoted her to be Elon's first vice president for development. She served in that role for 16 years, providing administrative leadership, strong trustee and donor stewardship and crucial fundraising success that fueled the institution's growth. She led four major Elon fundraising campaigns and secured the first $1 million gift for the college. She also initiated the college's planned giving program and oversaw major gifts, annual giving, alumni and parent relations, church relations, foundation and corporate relations and the publications and public information office. The Elon endowment grew from about $3 million in the 1970s to more than $23 million in 1995.

Williams was named special assistant to President Young in 1995, representing Elon in the Alamance-Burlington community and continuing her personal relationships with many donors and friends. In 2010 President Leo M. Lambert named Williams vice president emerita and she continued to be active in the life of the university and nurtured philanthropic relationships between generous families and Elon.

Williams said her life had three priorities: her family, her university and her community.

Williams was named Elon University's Distinguished Alumna of the Year in 1995, was awarded the Elon Medallion for outstanding service to Elon in 1998 and received the Frank S. Holt Business Leadership Award in 2008. In 2013, the university named a residence hall in The Oaks neighborhood on campus in her honor, and her portrait hangs in a conference room that bears her name in the president's office suite in Powell Building.

Williams was a generous and consistent donor to Elon through more than five decades, supporting scholarships, academic programs, athletics and building projects. She was a member of the Elon Society, Phoenix Club and the Order of the Oak planned giving society, and she and her husband created the William L. and Jo Watts Williams Scholarship.

In July 2021, Elon University's Board of Trustees approved the naming of the Dr. Jo Watts Williams School of Education to honor her lifetime of service. The naming was in recognition of a $10 million gift to Elon by the Williams family – sons William (Lee) Williams III and his wife, Beth, through the Beth and Lee Williams Foundation, and Dr. Randall Williams and his wife, Elizabeth. This is the largest endowment gift in Elon's history and is designated to support students, faculty, administration and the university's community partnerships.

Williams leaves a legacy of leadership in Alamance County, serving as one of the driving forces in the complex merger of Memorial Hospital and Alamance County Hospital and the construction of Alamance Regional Medical Center (ARMC), which opened in 1996. She served on the Memorial Hospital Board and continued on the ARMC board. She was also instrumental in the construction on the former Memorial Hospital property of Alamance Extended Care, which includes the Village at Brookwood retirement community and Edgewood Place. Williams served as a board member for the Alamance County Chamber of Commerce, Wachovia Bank & Trust Co., United Way, The Alamance Foundation, Alamance-Caswell Hospice, Alamance County Habitat for Humanity, the Alamance County chapter of the North Carolina Symphony, Salvation Army and Burlington Boys and Girls Club. She was also a trustee and ruling elder in First Presbyterian Church and was named Woman of the Year by the Burlington Civitan Club in 1982. In 2014 she was recognized by North Carolina Governor Pat McCrory with the state's Order of the Long Leaf Pine award.