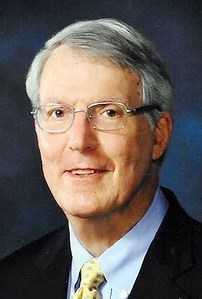 Mr. Follin was born on March 30, 1942 in Greensboro, North Carolina, the son of the late Marion G. Follin, Jr. and Ellen Mordecai Kelly. Marion was a graduate of Woodberry Forest School in Orange, VA, the University of North Carolina at Chapel Hill (1964 – Phi Beta Kappa) and Yale Law School (1967). After graduation, he enlisted in the Navy and graduated from the Officer's Candidate School in Newport, RI and served a year with the Mobile Riverine Force in Vietnam. He was admitted to practice law in the courts of the District of Columbia, North Carolina and the United States Tax Court. After 32 years of practice, he retired in 2002 to pursue volunteer opportunities and spend time with his family.

Marion was a lifelong member of Holy Trinity Episcopal Church and deeply devoted to his church throughout his life, serving and leading on a variety of ministries, committees and commissions, including several terms as senior warden of the Vestry.

He served 3 terms on the Greensboro City Council and on the boards of the Episcopal Conference Center, Canterbury School, the Greensboro Day School and Guilford College. He received great reward from volunteering with the Servant Center and Lutheran Family Service. He likened his time with the men at the Servant Center to the parable of the loaves and fishes, where he said, "you give one loaf and get 12 in return."

Family was of utmost importance to Marion. He was a devoted stepfather and his stepchildren and grandchildren were the highlight of his life. He loved taking them on trips, both stateside and abroad, and making lasting memories for them. He was always in the midst of the grandchildren, the only adult on the floor playing with blocks and cars or on the beach building sand castles. They'll remember him making pancakes and chocolate shakes for them and watching SpongeBob together.

He loved the game of golf, playing since he was a boy, and enjoyed his golf buddies until his primary progressive MS kept him off the course. Always an avid reader, he particularly enjoyed his daily Wall Street Journal, weekly Barron's and annual reports. Known for his intellect, wisdom and sense of humor, he was a man of decency, honor and integrity with a kind and caring spirit. Following his MS diagnosis, he was greatly admired for his positive attitude and outlook.

A memorial service celebrating the life of Mr. Follin will be held for the family in the columbarium of Holy Trinity Episcopal Church on Saturday, January 30th. Memorials may be made to Holy Trinity Episcopal Church, 607 N. Greene St., Greensboro, NC 27401 or the Follin Fund, National MS Society, 3101 Industrial Drive, Suite 2101, Raleigh, NC 27609.

The family thanks the staff and caregivers at Well-Spring who cared for Marion with dignity, respect and humor and particularly his nurse Tammy Nelson and caregiver Debra Joyce.

Hanes Lineberry North Elm Chapel is honored to assist the Follin family. Remembrances may be shared by visiting www.haneslineberryfhnorthelm.com.

Published by Greensboro News & Record on Jan. 27, 2021.
To plant trees in memory, please visit the Sympathy Store.
MEMORIAL EVENTS
To offer your sympathy during this difficult time, you can now have memorial trees planted in a National Forest in memory of your loved one.
Funeral services provided by:
Hanes Lineberry Funeral Home
MAKE A DONATION
MEMORIES & CONDOLENCES
Sponsored by Hanes Lineberry Funeral Home.
4 Entries
Marion served with me on the U.S.S. APL 30. The ship's company had only four officers. He had great insight and wisdom about the war we were engaged in. He had a sense of humor and his men were loyal to him. I know that at least three of the four of us later were very involved in our churches.
Sam Platts
March 12, 2021
Marion was a true gentleman and it was a privilege to have been his pharmacist for many years. We always enjoyed his visits to Burton´s Pharmacy and the great conversations we had on a variety of topics. Condolences to his family.
Frank Burton
January 28, 2021
Susan--what a beautiful life story of this man who loved life and always shared it with all of his family! My heart is with you!! Hoping you find Peace knowing that he is now without pain and walking with Angels. Sending my Love & Sympathies
Joanie Attayek
January 28, 2021
Marion was a beloved boss to me for many years. Working with him was like working for a dear friend. He was so understanding and caring. My prayers go out to Peggy and all of his family. He will be greatly missed.
Selma & Stevie Bullins
January 27, 2021
Showing 1 - 4 of 4 results