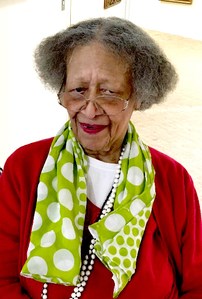 Thelma Miller Wells, age 94, went to be with the Lord June 10, 2021 due to a stroke. She was born February 28, 1927 in Guilford County, North Carolina to Gurney and Doretha Miller. She was married to James "Brother" Wade in 1949 and then to James "Duke" Wells in 1980 who both preceded her in death. She also had one son, Larry with Brother Wade, who also preceded her in death in 1979.

Thelma moved to New York after she graduated from Dudley High School. She first worked for Blue Boy Dolls painting faces on the girl dolls. She loved putting on makeup after this job. Later she became a beautician. She styled hair until she retired. After retirement she moved back to Greensboro to be around family. She lived at Hall Towers. She thoroughly missed New York.

Thelma was a devout Christian. She got saved at an early age. She faithfully went to church while in New York. When she moved back to Greensboro her transportation was limited so she joined Jimmy Swaggart's Ministries. Anytime you went over to her apartment, she was listening to their ministries on the television. She knew every song that came on. Her favorite was Amazing Grace because she said it was her Grandmother Amy's favorite.

Thelma is survived by her brother and wife James "Jimmy" and Plassie Miller of Greensboro. Plassie was like a sister to her. She is also survived by a host of nephews and nieces. Special to her is her nephew Dempsey and wife Myra who both took care of her in her later years.

900 E. Market Street, Greensboro
To plant trees in memory, please visit our Sympathy Store.
Published by Greensboro News & Record on Jun. 14, 2021.
MEMORIAL EVENTS
Jun
18
Celebration of Life
11:30a.m.
PERRY J BROWN FUNERAL HOME
909 E. MARKET STREET, Greensboro, NC
Funeral services provided by:
PERRY J BROWN FUNERAL HOME
MAKE A DONATION
MEMORIES & CONDOLENCES
Sponsored by PERRY J BROWN FUNERAL HOME.
3 Entries
Although I can´t remember if we ever met, I would have loved to hear some of your tales about our past. Rest In Peace Cousin Thelma and u can bring me up to date when I meet u in Heaven
Haywood Miller
June 15, 2021
So sorry for your loss. You and your Family are in my prayes.
Erich McLaughlin
June 15, 2021
Our heart and prayers are with you all. May Gods power of comfort be with you.
Charles & Gayle Patton
Friend
June 15, 2021
Showing 1 - 3 of 3 results