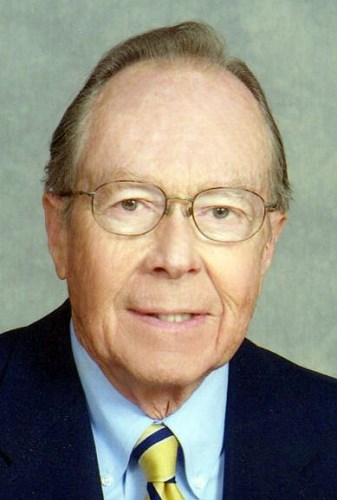 MAY 22, 1930 - OCTOBER 27, 2019 William Frederick (Bill) Black, 89, beloved father, grandfather, businessman and philanthropist, passed away at Well-Spring Retirement Community in Greensboro on October 27th. Born on May 22, 1930 in Durham, North Carolina to J. Norman and Susan Brown Black, he moved at age one to Greensboro, where he would spend the rest of his life. Raised in the Sunset Hills neighborhood, he attended Greensboro city schools-- graduating from Greensboro Senior High, where he was a proud member of the high school concert and marching bands as a clarinetist. He was an active Boy Scout and worked diligently to achieve the rank of Eagle Scout. Bill then went on to be a proud Tar Heel at UNC Chapel Hill-- joining Beta Theta Pi fraternity and graduating with a degree in business. After serving a brief time in the Navy, he returned to Greensboro and began selling real estate for Brown Realty. He met JoAnn Fuller and immediately knew she was the love of his life. Engaged after just five weeks, they married in 1956 and had 45 wonderful years together before her passing in 2001. In 1957 he started what would become a long, successful career in banking-- first with Security National Bank (which became NCNB), and then as a co-founder of Community Bank of Carolina in 1970. The bank was acquired by Southern National Bank which then merged with BB&T, where he served as an active board member until his retirement at age 70. Bill was an avid and knowledgeable fisherman who owned an excessive number of fishing rods and lures which he used on the coast and in his favorite ponds, rivers, streams and lakes. Fish lived in fear of Bill Black, who loved nothing more than a good fish fry! He had countless fish stories and treasured the time spent in the company of his fishing buddies. He was also a talented musician who loved many types of music but was especially fond of jazz. He helped fund jazz concerts at UNCG, endowed music scholarships, and enjoyed playing one of his classic guitars, the clarinet and occasionally the "gut-bucket." Those who knew him recognized his strong sense of responsibility and true compassion for others. He loved his community and devoted countless hours to serving on boards, raising money, and volunteering for organizations and projects for which he cared deeply, including the Salvation Army, Guilford Veterans Memorial, Greensboro Kiwanis Club, Hospice of Greensboro, United Way, Wesley Long Cancer Center, Greensboro Chamber of Commerce, Greensboro Merchants Association and UNCG, where he endowed scholarships in business, nursing and music. He was a man of deep faith and a life-long member of West Market Street United Methodist Church, where he worshipped faithfully and shared his time and resources as a servant leader, Sunday School teacher and Administrative Board chair. Bill was a voracious reader, an entertaining storyteller and a southern gentleman with a mischievous sense of humor. But most importantly he was a loving husband, father, and PaPa, and an example and inspiration to many. He counted his blessings and considered his family to be the greatest of them all. He was pre-deceased by his wife, JoAnn Fuller Black, and his parents and brother, Norman Black, Jr. He is survived by his daughter Susie Wall (Ronnie), son Fred Black (Kathy); his grandchildren Ann Johnson (Taylor), Maggie Pinson (Will), Will Black (Devin) and Kathryn Black; and his great-grandchildren Baxter, Charlie and Lou. A service will be held Friday, November 1 at 2 p.m. at West Market Street United Methodist Church, 302 W. Market Street, Greensboro, NC 27401. The family will greet friends in the church Fellowship Hall after the service. In lieu of flowers, contributions can be made to the Salvation Army (1311 S. Eugene Street, Greensboro, 27406), West Market Street United Methodist Church, or a favorite charity that is making a difference in the lives of others. Forbis and Dick North Elm Chapel 1118 North Elm St., Greensboro, NC 27401

Published by Greensboro News & Record on Oct. 29, 2019.
To plant trees in memory, please visit the Sympathy Store.
MEMORIAL EVENTS
To offer your sympathy during this difficult time, you can now have memorial trees planted in a National Forest in memory of your loved one.
Funeral services provided by:
Forbis & Dick Funeral Home - North Elm Chapel
MAKE A DONATION
Please consider a donation as requested by the family.
MEMORIES & CONDOLENCES
Sponsored by Forbis & Dick Funeral Home - North Elm Chapel.
0 Entries
Be the first to post a memory or condolences.