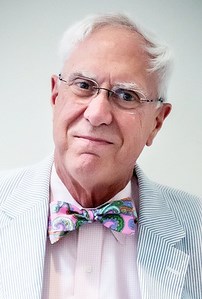 William Edmund "Bill" Bowman, Jr. of Greensboro died unexpectedly on March 6, 2021, at the age of 73. Bill will be remembered as a devoted husband, father, grandfather, uncle, physician, and friend.

Bill was born in 1948 in Winston-Salem, North Carolina and grew up in Colfax, North Carolina. He graduated from Davidson College in 1970 and went on to obtain his degree in medicine from the University of North Carolina School of Medicine in 1974. Following medical school, he entered the United States Army and was originally stationed in San Francisco, California, where he completed his general surgery residency and served as an army surgeon. He served for seven years and left the army with the rank of major.

Following his time in the army, Bill and his family returned to North Carolina, settling in Greensboro. He practiced surgery in Greensboro for three decades and loved working with thousands of patients, doctors, nurses, and medical staff. Bill was actively involved in the American Medical Association, serving in the House of Delegates. Upon retirement from the practice of medicine, Bill served an additional nine years as vice president of medical affairs for Cone Health.

Outside of his fulfilling career dedicated to the medical care of others, Bill found great enjoyment in many activities. His greatest joy came from spending time with his family and friends. Those who knew Bill best will remember him for his kind smile, unique sense of humor, and readiness to help whenever called upon. Bill was at his happiest on the family farm in Colfax, where he devoted many hours of hard work to keeping cattle, raising crops, and enjoying the woods and pond. He was an avid tennis player, fisherman, gardener, and birdwatcher, and he had even taken up making his own jellies and preserves. He was a faithful fan of the UNC Tarheels, the Davidson Wildcats, and the UNCG Spartans. Service to others was of paramount importance to Bill, and he dedicated many hours volunteering with the Healing Gardens at Wesley Long Hospital, Habitat for Humanity, and other organizations.

Bill's final day of life was one filled with many of the things that made him happiest. He won two sets of tennis in the morning, played baseball with his son and grandsons in the afternoon, and had dinner with his wife, daughter, son-in-law, and granddaughter. Bill is survived by his beloved wife Gay Bowman, daughter Natalie Bowman (Daniel Gilstrap) of Chapel Hill, son Andrew Bowman (Megan Rudock) of Greensboro, grandsons Henry Bowman and Paul Bowman, and granddaughter Millicent Gilstrap. He was preceded in death by his parents William E. "Ebbie" Bowman and Panthea Boyd Bowman. Bill also leaves behind countless friends, family members, and colleagues, all of whom meant a great deal to him.

In lieu of flowers, memorial contributions can be made to the Cone Healing Gardens Fund at https://www.conehealth.com/giving/ways-to-give/cancer-center/ or Habitat for Humanity of Greater Greensboro at https://habitatgreensboro.org/give/. Plans for a memorial service are not yet available.

Cremation Society of the Carolinas