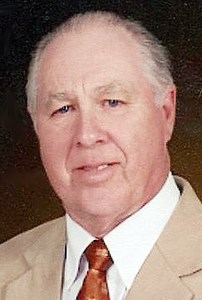 Bill was born in Farmville, VA, June 15, 1936, the son of Lawrence A. Inge and Christine Oliver Inge. He grew up in Crewe, VA and graduated from Lynchburg College in 1957. He was employed at Owens Illinois and later Babcock and Wilcox in their nuclear fuel division. In 1970 he moved to Greensboro, NC, where he was employed by Lorillard Tobacco Company in their purchasing department, retiring from there in 2002. Bill also served eight years in the Virginia National Guard, having been honorably discharged.

Bill was a member of Forest Oaks Country Club for 48 years, and an avid golfer. He especially enjoyed the company and friendship of the Forest Oaks Retired Seniors.

Bill loved the Lord and his church, Southeast Baptist Church. He was a member of the Men's Fellowship Class. He served as a deacon as well as in other ministries of the church. Bill was a loving and devoted husband and father. He is survived by his wife of 63 years, Charlotte Burch Inge; his son Robert and wife Tracey Inge of Salisbury, North Carolina; granddaughter Ashley and her husband Matthew Brittain of Salisbury, North Carolina; and granddaughter Karcen Bowers of Ventnor City, New Jersey.

A memorial service will be held to celebrate his life on Saturday, May 8, 2021 at 2 p.m. at Southeast Baptist Church, 5011 Liberty Road, Greensboro, NC.

In lieu of flowers, donations may be made to Southeast Baptist Church, 5011 Liberty Road, Greensboro, North Carolina, 27406, or Hospice of Greensboro.

Published by Greensboro News & Record on May 7, 2021.
To plant trees in memory, please visit the Sympathy Store.
MEMORIAL EVENTS
May
8
Memorial service
2:00p.m.
Southeast Baptist Church
5011 Liberty Rd, Greensboro, NC
Funeral services provided by:
Forbis & Dick Funeral Service - Pleasant Garden Chapel
MAKE A DONATION
MEMORIES & CONDOLENCES
Sponsored by Forbis & Dick Funeral Service - Pleasant Garden Chapel.
2 Entries
I had the pleasure of working with Bill for his many years at Lorillard. He is now in the arms of Our Lord. My prayers and condolences to the Inge family.
THOMAS O'HANLON
May 8, 2021
It is with joy we were blessed by Bill´s deep faith as a member of Men´s Fellowship Class at Southeast... he was a faithful participant and contributer to our class discussions ... he will be missed but remembered as an excellent example of a Christian ... our prayers are with family during this transition time ... Jackie and Lonnie Baxley
Jackie and Lonnie Baxley
May 7, 2021
Showing 1 - 2 of 2 results