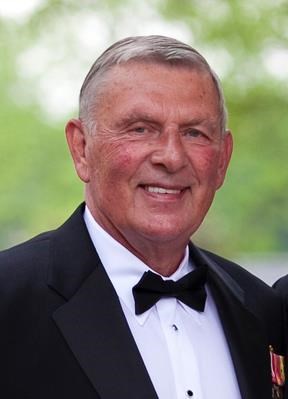 Klaus Dieter Schreiber, 75, passed away peacefully on July 11, 2016. He was born on May 9, 1941 in Dortmund Germany. He is survived by his loving wife Alice Schreiber and daughter Erika Schreiber Grace (Joseph Page Grace, Jr.).

He emigrated to the United States in 1956 and enlisted in the U.S. Marine Corps in 1959 where he rose to the rank of Colonel. Klaus was a recipient of the Navy Cross for his bravery as a platoon commander in a recon unit in Vietnam in 1967. He retired in 1994 after 34 years of active service for his country.

After moving to Greenville in 1994, his second career began as a German teacher at Eastside High School where he enjoyed his students immensely and taught them that learning German could be fun. He had a great sense of humor and loved being around young people. Klaus later taught at BMW and tutored private students at home who all achieved proficiency and were able to speak the language fluently under his tutelage.

Klaus will be buried at Arlington National Cemetery in Washington, DC, where he will receive full military honors and be surrounded by his loving family and friends as well as beloved Marines, many of whom served with him in Vietnam. Date of burial is yet to be determined.

His family would like to express their gratitude to the staff at St. Francis Hospital and The Cancer Center for their care, and to the many doctors and nurses who attended to him during this difficult time.

In lieu of flowers, memorials may be made to the U.S. Marine Corps Scholarship Foundation (TBS 3-67) at 909 N. Washington Street, Suite 400, Alexandria, VA 23314, or to the charity of your choice. Condolences may be expressed for the family at www.cremationsocietyofsc.com.

Published by The Greenville News on Jul. 16, 2016.
To plant trees in memory, please visit the Sympathy Store.
MEMORIAL EVENTS
To offer your sympathy during this difficult time, you can now have memorial trees planted in a National Forest in memory of your loved one.
Funeral services provided by:
Cremation Society Of South Carolina
MAKE A DONATION
Please consider a donation as requested by the family.
MEMORIES & CONDOLENCES
Sponsored by Cremation Society Of South Carolina.
22 Entries
My condolences to the family. I was his Administrative Clerk at Doctine Division. He was a great man and Marine!
Anthony Milanes
August 11, 2021
Great guy. LtCol Schreiber was our battalion CO for a couple of years around 1983. The best CO we had in my experience. He was very tough, but fair and commanded a lot of respect from both enlisted and officers alike. My condolences to the family of this great Marine.
David Blount
January 2, 2020
I just found out that Nick had passed and needless to say I was shocked. We were both Sargent while serving in the London Marine Detachment. He certainly was a character and a great Marine.
Ken Bouchard
May 17, 2018
Nick and I served together in Marine Detachment, London and then later he was my Battalion Commander with 2Bn 4th Marines where I was a Company First Sergeant. What a joy it was to serve with him twice. He always had your back and took everything seriously. Semper Fi
Curtis Kauffman
Military
March 28, 2018
Skipper, I have been trying to locate u for years. we were together at Coronado Ca and my sons were w/u in CamLej. the MarCor will never be the same. My best. GySgt Joe Galligan USMC (Ret)
joseph galligan
Military
September 6, 2017
LtCol Schreiber was my Battalion Commander with Second Bn Fourth Marines (2/4) at Camp Lejuene during 1980's.

He would visit our weekly battalion Inspections usually after PT ,and walk the Ranks and on the spot Promote Marines who outshine our BnCmd LtCol Schreiber.

Quite the Leader of Marines repected by all he commanded.

GySgt Dave Chisholm Ret
June 12, 2017
Mrs. Schreiber and family,
My deepest condolences. I just found out of Nick's passing. Nick and I served in London together and also worked out together, in fact he taught me how to work out properly. The memories I have of Cpl. Schreiber at the time are fond ones, he did some very interesting things when we were stationed together that I thought were unique. I always said" He was one person who could throw a brick in the air and it never come down" in other words he was perfect and never did anything wrong!
An OUTSTANDING MARINE guarding Heavens Gate!!

Semper Fi,
Harold McConnell (aka Duck)
Harold McConnell
March 6, 2017
I had the pleasure of meeting Klaus when we were aboard the Marine Detachment on the USS Springfield in the early 1960's. Klaus was a Lance Corporal at that time. The best Marines are those who rise through the ranks as Klaus did. Rose to the rank of Colonel and received The Navy Cross. What a Marine! Sympathies to his family.
DENNIS YINGLING
September 15, 2016
Klaus, was my pleasure to serve with you on the Springfield, and OCS, Quantico. Paul Villiard
September 14, 2016
I had the pleasure of serving with Klaus aboard the USS Springfield (Command ship of the Sixth Fleet, 1961-64). He was a great shipmate and a role model for all Marines to emulate. Sorry to hear of his passing.

Cpl Walt (Mike) Jensen
September 14, 2016
Klaus - as a good friend and work out buddy while on the USS Springfield. Cpl N L Balch
niles Balch
September 13, 2016
Klaus - What a pleasure to have served with you at 2nd MARDIV. Your inventive and always-inspired play as OPFOR made the Division (and not just 2nd Combat Engineers) the better for what would lie ahead in Kuwait and Iraq. Semper Fi. Col K.O. Randel
July 27, 2016
It was a honor to work for you.
S/F
LTCOL John Cassady USMC(RET)
John Cassady
July 26, 2016
July 26, 2016

Our friendship meant a great deal to us and we will never forget!! I will toast him with our favorite "Black Russian" and say prayers for you and your family.

Bob & Dee
Bob & Dee Tschan
July 26, 2016
Alice, Nick will be at peace now...however, the inhabitants of heaven will be turned out smartly under KD's tutelage.
With deepest sympathy...
Nick Hoskot
USMC (Ret)
SEMPER FIDELIS Herr Schreiber
Nick Hoskot
July 26, 2016
It was an honor to serve with you.

S/F
Lt.Col. Lew Deal, USMC (ret)
Lew Deal
July 22, 2016
Semper Fi
Mike Osborn TBS 3/67
Mike Osborn
July 22, 2016
"Herr Schreiber was a great German teacher and the students loved him." Auf Wiedersehen!
Kris Cox
July 20, 2016
Thank you Mr Schreiber for fixing my car when it broke down in front of your house in high school. Also thank you for your beautiful daughter and my best friend. Your wonderful wife Alice and daughter Erika will be taken well care of in your absence. Rest in peace Colonial Schreiber.
Anna Jaggard
July 20, 2016
THE Marine.........I will miss that quite inspiration
Lionel Raymond
July 18, 2016
My thoughts and prayers are with you and your family! I'm thinking about you Miss. Alice.
Linda (from Sportsclub) Calvio
July 15, 2016
Showing 1 - 22 of 22 results