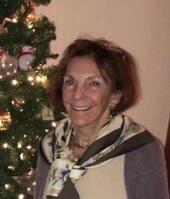 BORN
1940
DIED
2021
FUNERAL HOME
Leo P. Gallagher & Son Funeral Home
2900 Summer Street
Stamford, CT
Cynthia Maughan Powell
Cynthia Maughan Powell, resident of Greenwich, CT, passed away on January 24 after a fall earlier in the month. She was 80 years old and remained active and independent until her final days.
Born in Perry, OK March 25, 1940 she was the daughter of David and Mary Maughan. Cindy graduated from The Northrop School (Minneapolis), Smith College and some years later earned a Master's degree from Manhattanville College . She was employed by Air France in public relations in the 1960s before starting a family with husband, Joseph Wright Powell III, whom she married in 1969. They resided in Manhattan, Greenwich, Sharon and New Canaan. While living in Sharon, she created and managed a unique art gallery that shared space with their restaurant, The Deck, in nearby West Cornwall. In retirement, they owned homes on Nantucket and in Fairfield and traveled extensively. Joe passed away in 2006 and Cindy returned to Greenwich in 2013 where she thoroughly enjoyed living in the West Lyon Farm community and struck up a number of new friendships.
Cindy supported and volunteered with organizations too numerous to list including The Junior League, Puppies Behind Bars and the Greenwich Arts Council. She will be fondly remembered for her intellect, humor and above all devotion to family.
Cindy is survived by sons Charles (Peter) of New York City, Philip (Angela) of Napa, CA and stepson David (Rebecca) of East Longmeadow, MA as well as 3 grandchildren . She was predeceased by her parents and husband.
Cindy will be interred with Joe in the Columbarium Garden of Siasconset Union Chapel on Nantucket. A celebration of life in Connecticut will be announced when it is safer to gather.
Memorials are preferred to Puppies Behind Bars 263 West 38th St., 4th Floor New York, NY 10018 or donor's choice.
Published by Greenwich Time from Feb. 9 to Feb. 10, 2021.
To plant trees in memory, please visit the Sympathy Store.
MEMORIAL EVENTS
To offer your sympathy during this difficult time, you can now have memorial trees planted in a National Forest in memory of your loved one.
Funeral services provided by:
Leo P. Gallagher & Son Funeral Home
MAKE A DONATION
MEMORIES & CONDOLENCES
Sponsored by Leo P. Gallagher & Son Funeral Home.
2 Entries
In loving memory of Cynthia Maughan Powell, and an enduring friendship of sixty years, that began our senior year in college and continued over the decades. Cindy will be remembered for her wisdom, compassion, confidence, and especially for her ready wit. She will be greatly missed.
June Johnston
Friend
February 22, 2021
CMP was an extraordinary and accomplished lady with a huge heart and contagious laugh. She will be missed by all whom she touched.
Micki Linen
Friend
February 11, 2021
Showing 1 - 2 of 2 results