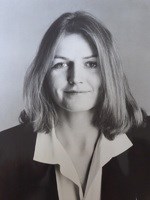 BORN
1950
DIED
2021
Liz Fulton
May 31, 1950 - Jan. 27, 2021
Elizabeth "Liz" Fulton died in her sleep in Darien, Conn. on January 27, 2021. She was 70.
Journalist, writer, musician, artist, equestrian, and loving mother, sister, and daughter, Liz was the consummate renaissance woman. Born in New York City on May 31, 1950 to Bill and Joan Fulton (neé Twelfthtree), Liz grew up in Cos Cob, Connecticut. As a child, Liz loved to ride horses, swim, and play the drums, activities that would bring her joy throughout her life. A deep-rooted love of rock n' roll led her to attend Woodstock in 1969 at age 19.
In her career as a journalist, Liz followed in the footsteps of both her parents—Bill, a newspaperman for the Chicago Tribune, Joan, a correspondent for the United Press (now United Press International). In the mid-1970s, Liz was the first voice many New Yorkers woke up to in the morning as the drive time news reporter for WPLJ, then-New York City's Top FM radio station.
In the late 1970s, an itch for travel led her abroad to Europe and then the Middle East where she became a stringer for CBS. She covered the Lebanese Civil War from Beirut, reported on the Ayatollah's return to Tehran, and filed stories from Kabul during the Russian incursion into Afghanistan.
Returning to New York in 1982, Liz served as an on-air network correspondent for NBC, introduced by Jane Pauley in the morning, and Tom Brokaw in the evening. She married Clyde "Larry" Caldwell in 1983 and had one child, Maggie, in 1984. The young family moved to Redding, Connecticut in 1986.
Liz took a break from the news business in the early 90s, turning her focus to a creative life of painting, gardening, music, and writing. She authored two novels, "Vengeance My Love," about a journalist in the Middle East, and "The Palm Dome," a mystery set in Connecticut.
Following her amicable divorce, she wrote an unpublished book that was part memoir, part gardening guide called "Gardening as a Bloodsport." She also produced a children's documentary about draft horses called "Big Horse." In the evenings, she played drums for The Bad Dogs, a Fairfield County-based rock band.
In the mid 90s, Liz returned to journalism as a contributor to the Nickelodeon children's program "Nick News," hosted by Linda Ellerbee. Liz won a Peabody Award for her work on the show. Later, she joined NBC's Today Show as a news producer, where she won two Emmys.
In retirement, Liz and her partner Bruce Stanbery traveled extensively before settling back into her beloved home on the Norwalk River in Ridgefield, Connecticut.
Liz is survived by her daughter, Maggie Caldwell of Portsmouth, N.H. Liz is also survived by her sisters Jill Jarboe of Austin, Tex., and Sally Clay of Danbury, Conn., brother Scott Fulton of Washington state, and partner Bruce Stanbery of Costa Rica. She is predeceased by her parents.
In lieu of flowers, the family asks those who wish to remember Liz by making a contribution in her name to the International Women's Media Foundation (IWMF.org), which provides programs and grants to women journalists. A celebration of Liz's life will be held when its safer to gather.
Published by Greenwich Time on May 30, 2021.
To plant trees in memory, please visit the Sympathy Store.
MEMORIAL EVENTS
To offer your sympathy during this difficult time, you can now have memorial trees planted in a National Forest in memory of your loved one.
MAKE A DONATION
MEMORIES & CONDOLENCES
2 Entries
Liz was my second cousin, on my father’s side. Growing up, he told us stories of our American relatives. I was blessed to reconnect with Joan and finally meet Liz and so many others at one of Liz’ famous May parties. An amazing women of many achievements may she find peace and ride proudly into the sunset. Sincere condolences to all her family and friends.
Jill Romanchuk
Family
June 6, 2021
Liz was sharp as a track. I admired and envied her intellect... And the way she never took anything at face value. And wow could she play drums - a verifiable rock and roller. Once I gave her for her birthday a sweet little suit from Ann Taylor. She returned it and used the cash for tickets to Tina Turner - a much better idea. Bad Dogs - I am sure she named the band. I so admired her for recognizing when she had to take a break from the fast lane - quite a detour in fact - And it was during that time I got to know her, as we shared being moms of two adorable girls. Liz was an experience - a rich palette of fabulous colors. I am lucky she was part of my life. My sympathies to beautiful Maggie, who is lucky to have been so loved by her mother.
Kim Kotila
May 31, 2021
Showing 1 - 2 of 2 results