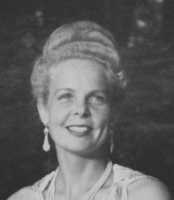 Elizabeth C. Moore
Elizabeth C. Moore died Dec. 10, 2017, at her residence at The Mews in Greenwich at age 97.
Elizabeth was born Aug. 11, 1920, in Hackettstown, N.J., to Mabel Speer Cooper and Marin Lebrun Cooper. She attended Centenary Academy and Centenary College in Hackettstown. After graduation, she lived in Kentucky for several years working as a buyer for a food company. She married William F. Moore in 1951, and the couple moved to Greenwich, where they raised two children.
Elizabeth had a beautiful singing voice and studied music in New York City, and sang for several years in the choir at St. Bartholomew's Church on Park Avenue. She was a member of the Second Congregational Church in Greenwich and sang in the choir there for 25 years. She also sang with the Grace Notes in Greenwich.
She was an enthusiastic golfer and tennis player, and played both sports at the Greenwich Country Club and the Lake Placid Club in Lake Placid, N.Y., where the family spent part of nearly every summer while the children were growing up.
Elizabeth was predeceased by her parents; her husband; her sister, Lebrun Cooper; and her brother, Gibson Cooper.
She is survived by her daughter, Cheryl Moore (Bob Ohanesian) of Sarasota, Fla.; her son, Gregory (Isabelle) Moore of Ketchum, Idaho; her niece Valerie Von Volz (Thomas Gruenewald), a native of Greenwich and now of Sharon, Ct.; three other nieces and a nephew who grew up in California; and four grandchildren.
Elizabeth maintained an appreciative view of life to the end, frequently telling her friends and caregivers at The Mews, "Count your blessings!" Her cheerful demeanor will be missed by all who knew her.
Published by Greenwich Time on Dec. 29, 2017.
To plant trees in memory, please visit the Sympathy Store.
MEMORIAL EVENTS
To offer your sympathy during this difficult time, you can now have memorial trees planted in a National Forest in memory of your loved one.
MAKE A DONATION
MEMORIES & CONDOLENCES
2 Entries
Sincere sympathy to Elizabeth's family. Be proud of your beautiful, wonderful mother.
Frances Veit
Acquaintance
April 20, 2018
My sincere condolences to family and friends for your great loss. May our Heavenly Father sustain you during this difficult time.-Ps.94 : 19
December 31, 2017
Showing 1 - 2 of 2 results