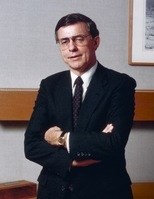 BORN
1931
DIED
2021
FUNERAL HOME
Leo P. Gallagher & Son Funeral Home
31 Arch Street
Greenwich, CT
Hans Storr
Hans Storr, for 17 years the Chief Financial Officer of Phillip Morris, masterminded the financing of the $5.6 billion acquisition of General Foods in 1984 and the $13.6 billion acquisition of Kraft four years later. But he spoke with more satisfaction of having been able to buy his little sister a green bicycle and his mother a Grundig radio before he left his native Germany as a 22 year old to try his luck in America.
He passed away peacefully on August 31, 2021, aged 89, at his home in Greenwich, Connecticut, of Alzheimer's. He was born on October 28, 1931, in Kirschweiler, a small hilly village in the west of Germany. Growing up, he was a scoring threat on the soccer field and a reader, with an interest in stories of the American west. When World War II interrupted his schooling, he and his buddies collected loose ammunition in the woods. He also studied the records in the attic of his parents' failed motorcycle dealership.
Interested in business, he wrangled a job at one of the American military bases in the area, helped by his ability to speak not only English but also French. In four weeks he learned the military's accounting system. His first job was overseeing a soda fountain. Within a year and a half he was running three clubs for American soldiers.
With a sponsorship, he came to America in 1954. He got a job doing bookkeeping at the Pfister hotel in Milwaukee and took accounting classes at the University of Wisconsin. Eight months in, his new country decided to draft him and send him to South Korea as part of the peacetime occupation.
Back in Milwaukee, he married Karin, a fellow German immigrant. They had a daughter, Suzanne. Karin passed away suddenly. On New Year's Eve 1964, he had a blind date with Carol Schoenfeld, a Wisconsin native. They married in 1965 and had two children, John and Tina.
In the meantime, Storr had finished his studies and gotten a job at Milprint, an industrial company in Milwaukee, with the help of a professor he had impressed. Shortly after he started there, Milprint was acquired by Phillip Morris, part of an early wave of diversification in the tobacco industry. Years later the joke at PM was that the one valuable thing they acquired from Milprint was Hans Storr.
His rise was rapid. In 1966 he moved to the Manhattan headquarters of PM. By 1973 he was the head of finance for Europe, the Middle East and Africa, which meant living in Lausanne, Switzerland. By 1976 he was back at the HQ in NYC, as vice-president of finance for Philip Morris International. In 1979 he was named the CFO, and in 1982 he became a member of the board of directors. He also created and headed up a new division, the Philip Morris Capital Corp. He credited his success to his ability to set up accounting systems, and to his study of international banks and currency movements.
After his retirement in 1996, he partnered with a hotel developer in Edwards, CO, founded the Hans Storr Professorship in International Finance at his alma mater, traveled with Carol to Egypt, Alaska, the North Atlantic, Australia, and Kenya, skied and played tennis and golf for as long as an old soccer injury to his knees would permit, and beat up on his children and grandchildren at trivial pursuit and backgammon. Carol and Hans enjoyed a long and prosperous partnership. They celebrated their 50th wedding anniversary in 2015, before Carol passed away the next year.
Hans is survived by children Suzanne Storr of Greenwich, CT, John Hernandez-Storr (Luanne) of Pasadena, CA, and Tina Wilson (David) of Vail, CO; grandchildren Megan Carson, Colby and Nicole Wilson, Jonah and Naomi Storr, and Cassidy, Billie and Austin Hernandez-Storr; as well as many nephews, nieces, and friends.
Published by Greenwich Time on Sep. 4, 2021.
To plant trees in memory, please visit the Sympathy Store.
MEMORIAL EVENTS
To offer your sympathy during this difficult time, you can now have memorial trees planted in a National Forest in memory of your loved one.
Funeral services provided by:
Leo P. Gallagher & Son Funeral Home
MAKE A DONATION
MEMORIES & CONDOLENCES
Sponsored by Leo P. Gallagher & Son Funeral Home.
2 Entries
Our sincere condolences and love to all. Our Dad Hopp had so many memories working with Hans. He has also passed many yrs ago. Peace love
Lynn Pierpoint Meilick
September 22, 2021
Suzanne and all of the family of Hans Storr. I offer my sincerest condolences. We shall miss Hans in many ways. His pals from the Milbrook Club.
Randy Noonan
Friend
September 7, 2021
Showing 1 - 2 of 2 results