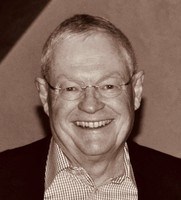 BORN
1945
DIED
2021
FUNERAL HOME
Edwards-Dowdle Funeral Home, Inc.
64 Ashford Avenue
Dobbs Ferry, NY
UPCOMING SERVICE
Memorial service
Oct, 21 2021
4:30p.m.
Ardsley Country Club
Send Flowers
Joseph E. L. Rogers
September 12, 2021
JOSEPH EDWARD LLOYD ROGERS
(January 30, 1945 – September 12, 2021)
Joseph "Jo" Rogers (76) passed away September 12 at his home in Greenwich, CT surrounded by family. In his last year he battled with Acute Myeloid Leukemia while continuing to live an active life.
Jo was born in Harare, Zimbabwe to Edward and Grace Rogers. He attended Ruzawi School in Marondera and Prince Edward School in Harare. He was a graduate of the University of Edinburgh in Scotland. Following his time at Edinburgh he received a Fulbright Scholarship to pursue graduate studies at the Massachusetts Institute of Technology in Cambridge, Massachusetts, from which he was awarded a doctorate degree in Chemical Engineering in 1973.
He was immensely proud of his Rhodesian/Zimbabwean heritage. His childhood there shaped much of his adult life including his collection of Shona art, his DIY attitude around the home, his love of the outdoors and wildlife, and the focus he placed throughout his graduate studies and career on sustainability of resources.
Jo was an avid golf, tennis, and platform tennis player and loved supporting the local communities surrounding those sports. He served as President of Fox Meadow Tennis Club in Scarsdale, NY, President of Ardsley Country Club, member of the Board of Directors of the American Platform Tennis Association, and Treasurer and Member of the Board of Trustees of the Platform Tennis Museum and Hall of Fame, which he worked tirelessly to help create. Additionally, over the years he volunteered his time to run many national championship platform tennis tournaments.
Most of all, though, what Jo loved was to cook for and entertain friends and family. He enjoyed working in the kitchen and considered the preparation and consumption of a meal (accompanied, unfailingly, by wine or an Aperol Spritz) as means to gather with loved ones and share a good time. When at home and not in the kitchen Jo would most likely be found working in the garden, which, in recent years, he lovingly cultivated alongside his partner Susan. Jo was not good at sitting still.
He was a Member of the Town of Greenwich Inland Wetlands & Watercourses Agency, of which he was recently serving as Secretary. Following the death of his wife, Jo co-ran "The Sally", a charity platform tennis tournament re-named in her honor, which since her passing has raised over $750,000 for The Sanctuary program of The Children's Village in Dobbs Ferry, NY.
Jo had a long career in the chemical industry beginning at Halcon Industries / Scientific Design Company where he joined the R&D group after receiving his doctorate from MIT and ultimately served as President and COO of Scientific Design Company. He later would serve as President and CEO of the Chemap division of Alfa-Laval, Inc. and run his own independent consulting business. More recently, Jo worked in various capacities at, and as a consultant to, the American Institute for Chemical Engineers.
Jo is survived by his son, David Rogers (Lizzy) of New York City; daughter, Sarah Rogers Boland (Greg) of Katonah, NY; his grandchildren Lilly and Dylan Rogers, and Vincent, Leonardo, and Sally Boland (to whom he was "Grandpa Jo"); brother-in-law, Ward Doonan (Cindy) of Westport, CT; and his long-time partner, Susan Glendon of Greenwich, CT. He was preceded in death by his beloved wife, Sally Rogers.
A memorial service will be held at the Ardsley Country Club on October 21st at 4:30pm. In lieu of flowers, please consider a donation to The Children's Village, Dobbs Ferry, NY. (https://childrensvillage.org/donate/)
Published by Greenwich Time on Sep. 17, 2021.
To plant trees in memory, please visit the Sympathy Store.
MEMORIAL EVENTS
Oct
21
Memorial service
4:30p.m.
Ardsley Country Club
NY
Funeral services provided by:
Edwards-Dowdle Funeral Home, Inc.
MAKE A DONATION
MEMORIES & CONDOLENCES
Sponsored by Edwards-Dowdle Funeral Home, Inc..
0 Entries
Be the first to post a memory or condolences.