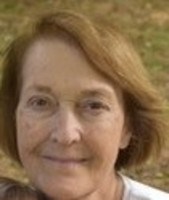 FUNERAL HOME
Leo P. Gallagher & Son Funeral Home
2900 Summer Street
Stamford, CT
Maureen FitzPatrick
Maureen Anne O'Connor FitzPatrick passed away on Friday, August 27, 2021. The cause was ovarian cancer.
Maureen was born in Jamaica, Queens to Edmund and Anne O'Connor, the eldest of three. As a child, she was a voracious reader, excelled at school, and was a gifted artist and singer. After graduating from the College of New Rochelle, Maureen worked in New York as a copywriter in the advertising industry for clients such as Pan Am Airlines, American Express and Ford Motor Company. While raising her daughter, Maureen continued her copywriting work as a freelancer, and later as the editor-in-chief for Connecticut Home Office, a weekly newspaper.
Maureen loved learning about other cultures, and traveled to 65 countries over her lifetime. Her adventures even took her to Afghanistan twice, where her great-grandfather served as a captain in the British Army. She would often regale her family with interesting stories of her travels abroad.
Throughout her life, gardening was Maureen's passion. She was well known in the community for her weekly gardening column, Sound Gardening, which ran in the Stamford Advocate and Greenwich Times for many years. Her love and deep knowledge of gardening led her to being an active member in the Stamford Garden Club, the Greenwich Garden Education Center and the Garden Club of America. Friends frequently came to her with gardening questions which she would often answer on the spot. Maureen also had a keen interest in current events and was a savvy investor, always keeping an eye on the stock market.
A devout Catholic, Maureen volunteered with many ministries at St. Catherine of Siena Church, and modeled a life of faith. Maureen always had thoughtful insights, and everyone she met felt her kindness and compassion. She also had a great sense of humor, and shared many laughs with friends and family. Her unconditional love will never be forgotten.
She leaves behind her husband of 47 years, Bob, her daughter Beth (Brian Mulherin), her grandchildren, Connor and Sabrina, and her sister, Patricia Duncan (Wendell). She was preceded in death by her brother, Robert O'Connor.
Visitation will be held at Leo Gallagher Funeral Home, 2900 Summer Street, Stamford, CT on Tuesday, August 31 from 4:00 – 7:00 pm. A funeral mass will be held at St. Catherine of Siena Church, Riverside, CT on Wednesday, September 1, 2021 at 10:30 am. In lieu of flowers, donations in Maureen's name may be made to either Mother Teresa's Missionaries of Charity in the Bronx (via Catholic Charities/Archdiocese of New York (www.catholiccharitiesny.org)), or to Catholic Relief Services (www.crs.org).
www.leopgallagherstamford.com

Published by Greenwich Time & Stamford Advocate on Aug. 28, 2021.
To plant trees in memory, please visit the Sympathy Store.
MEMORIAL EVENTS
Aug
31
Visitation
4:00p.m. - 7:00p.m.
Leo P. Gallagher & Son Funeral Home
2900 Summer Street, Stamford, CT
Sep
1
Funeral Mass
10:30a.m.
St. Catherine of Siena Church
Riverside, CT
Funeral services provided by:
Leo P. Gallagher & Son Funeral Home
MAKE A DONATION
MEMORIES & CONDOLENCES
Sponsored by Leo P. Gallagher & Son Funeral Home.
5 Entries
This is such a beautiful tribute to a remarkable individual who I know for her role in raising a wonderful daughter and friend. Maureen´s adventurousness, intelligence, deep kindness, and generosity live on in Beth and will too in her beautiful grandchildren. My deepest condolences to family and friends.
Jen Gould
Other
September 1, 2021
Oh Bob and Beth, Bobby sent me Maureen´s Obituary and it is absolutely amazing! So many accomplishments, some I didn´t know about. She certainly had a full life and I will always remember her as a sweet, gentle and kind women. I will miss her greatly. My love and prayers for her, you, Beth and all her family.
Alvera Farrell
August 31, 2021
Some of my favorite memories of Maureen took place over several years as we together worked on maintaining the St. Catherine of Siena Chapel Garden. Maureen was such a willing partner with so many excellent ideas - and so much fun to be with! She will be missed, but her memory lives on in my heart...
Jeannemarie Baker
Friend
August 31, 2021
All my memories are of warmth and willingness to help. Our community has lost a friend.
Anita O´Sullivan
August 30, 2021
Maureen was as beautiful and vibrant as the gardens she loved so dearly. She was always eager to counsel a novice gardener, critique a garden project, lead a botannical tour, or write elegant descriptions of local gardening events. I admired her greatly, relished her generous friendship, and will always remember her fondly.
Chris Thurlow
August 28, 2021
Showing 1 - 5 of 5 results