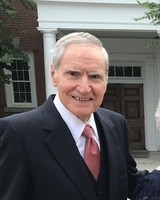 FUNERAL HOME
Fitzgerald Funeral Service Southwood Colonial Chapel - Tulsa
3612 E. 91st St. S.
Tulsa, OK
Robert Intrieri Sr
Robert P. Intrieri, Sr., 84, passed away peacefully on September 8, 2021, at his Montereau home in Tulsa, Oklahoma. A committal service was held on Monday, September 13, 2021, at the Calvary Cemetery Mausoleum in Tulsa. A Memorial Mass and reception honoring Bob's life will be held in Tulsa on his 85th birthday in October. Bob was born and raised in Cos Cob, Connecticut, the son of Paul and Rose (Chiappetta) Intrieri. Bob had a long career at the USPS, resulting in his appointment to Postmaster of the Riverside office. After retirement, he became a crossing guard at Riverside Elementary School, which gave him many enjoyable days interacting with the children and their parents. He was an active member of the VFW, having served in the U.S. Army, stationed in Germany. Bob was an avid sports fan and passed this passion on to his children and grandchildren. They especially enjoyed watching the Yankees and Giants together. Bob is survived by Annette (Merolle), his beloved wife of 61 years; his son and daughter-in-law, Robert, Jr. and Colleen of Southport, NC, their children Robert (Judy), Mitchell (Alexandra) and great grandson Bradley, and Thomas (Nicole); his daughter and son-in-law, Mari-Jean and Mark Ogle of Broken Arrow, OK, and their children Ashley and Tyler; his sister, Dorothy Intrieri; and numerous other extended family members and friends. Bob was preceded in death by his parents and brother, Frank.
If you wish to honor Bob's life, a donation in his memory may be made to Veterans of Foreign Wars at www.vfw.org or the Alzheimer's Association at act.alz.org.
Published by Greenwich Time on Sep. 17, 2021.
To plant trees in memory, please visit the Sympathy Store.
MEMORIAL EVENTS
Sep
13
Service
10:30a.m.
Calvary Cemetery Mausoleum
Funeral services provided by:
Fitzgerald Funeral Service Southwood Colonial Chapel - Tulsa
MAKE A DONATION
Please consider a donation as requested by the family.
MEMORIES & CONDOLENCES
Sponsored by Fitzgerald Funeral Service Southwood Colonial Chapel - Tulsa.
8 Entries
Annette and Dorothy I´m so sorry to hear about Bob wonderful person and kind, I lived behind his parents in Cos Cob for many years, he will be missed.
Rosemarie Santora White
Friend
October 3, 2021
To: Mrs. Intrieri, Mari-Jean and Bob - So sorry to learn of Mr. Intrieri´s passing. He was such a wonderful and kind man. The Andrea family and many others from Cos Cob will always remember him with that smile on his face. Thinking of all of you. Carla
Carla Andrea
September 22, 2021
Annette & family, So sorry to hear about Bob's passing. He helped me tremendously in my start at the Post office and I will always be deeply grateful for him. R.I.P Bob
John C ambrogio
September 20, 2021
Annette so sorry to hear about Bob´s passing he was a great guy who will be missed by all
Dennis Dellapietro & Family
Family
September 19, 2021
Annette so sorry to hear of Bob's passing he was such a wonderful person.
Patricia Tassone (Marzullo)
September 18, 2021
Annette & Family - So sorry to hear of Bob's passing. You are in my thoughts and prayers.
JoAnn Loparco
September 18, 2021
So sorry to heard of Bob passing
Joseph & Patricia Santora
Family
September 17, 2021
Annette, We are so very sorry at Bob´s death. He was a kind and gentle spirit. We will miss him and ache with your loss. Our love to you and your family.
Bob and Ann Caruso
September 13, 2021
Showing 1 - 8 of 8 results