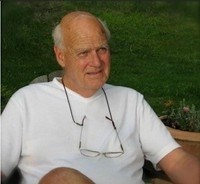 BORN
1930
DIED
2021
Ron Nelson
8/7/2021
On August 7, 2021, Ronald Prescott Nelson, Sr. died at his home in Monterey, Massachusetts. He was 91 years old.
Ron is survived by his son Ron Nelson, Jr. of Fairfield, Connecticut, and his wife Cathy Nelson; his son David Nelson of Stratford, Connecticut; his stepdaughter Sharon de Kadt and her husband Christopher Keevil of Woodbridge, Connecticut, his stepsons David de Kadt of Venice Beach, California and John de Kadt of Lee, Massachusetts; his four grandchildren Elizabeth and Amanda Beals, Emily and Alice Nelson; his two step-grandchildren Kai and Brynn Keevil; and his beloved life partner, Cynthia Oxboel of Monterey, Massachusetts. He was preceded in death by his second wife Norma Randy Nelson, his daughter Nancy Nelson, and his first wife Jacqueline Wilson Nelson.
Ron was born on March 15, 1930 in Springfield, Massachusetts. After growing up in Longmeadow, Massachusetts he graduated from Duke University on a Navy scholarship and spent three years on aircraft carriers and shore assignments around the world. His 40-year civilian career was in writing and management, first in the advertising business where he worked in various advertising agencies in New York City and Springfield. He later became an executive speech writer for leaders at General Electric Capital and IBM. He also served as Information Officer for the initial 1960s government study of the resources of and pressures upon Long Island Sound: "The Urban Sea."
With his first wife, Jacqueline, Ron raised their three children in Longmeadow, Massachusetts and Fairfield, Connecticut, and later married his second wife, Norma. Norma and Ron lived for many years in Old Greenwich, Connecticut. After his second wife passed, Ron moved to Carmel, California where he lived for eight years before being reacquainted with Cynthia and moving with her back to the Berkshires in western Massachusetts.
Ron was wonderfully gregarious and was an addition to any gathering. He enjoyed swimming and took particular delight playing dominos with family and friends. In his earlier years he played golf regularly and skied at many places around the globe. Ron was an avid reader, taking great interest in history, politics, world affairs, economics, other non-fiction topics, and, of course, spy thrillers. Ron had a thirst for life. He completed an Outward Bound course in his 50s, loved listening to music, sang in the church choir—and could often be heard quietly humming the melody from the fourth movement of Beethoven's Ninth Symphony, Ode to Joy.
Social causes were an important part of Ron's life. He served on the board of Trickle Up, an international development organization that makes small business grants to people living in poverty. He co-founded The Kripalu Consultants Collaborative (KCC), an organization which brings spirit to the workplace, now in its 27th year. Ron served as president of the Greenwich Forum to bring outstanding speakers on domestic and world affairs to Greenwich, Connecticut. While living in California Ron served on the Board of the World Affairs Council of Monterey Bay. He also served as Treasurer and board member of the International Human Learning Resources Network, an organization founded to further the family therapy teachings and work of Virginia Satir. Recently, Ron served on the Historic District Committee of Monterey, Massachusetts, and for many years as a Duke alumnus he interviewed students living in his area who had applied for admission to Duke.
Ron had a deep interest in spiritual matters and was a long-time student of A Course in Miracles. He approached his passing with perspective and equanimity and might have reminded us of a quote from A Course in Miracles which says, "I am not a body, I am free, for I am still as God created me."
A memorial service for Ron will be held on Saturday, September 18 at 2:00 p.m. at the de Kadt family land, Middle Way Farm, 322 Lander Road, Lee, Massachusetts 01238. All are welcome. Masks are required. The Family requests that in lieu of flowers gifts may be sent to a charity of your choice or to one of the organizations Ron supp
Published by Greenwich Time on Sep. 8, 2021.
To plant trees in memory, please visit the Sympathy Store.
MEMORIAL EVENTS
Sep
18
Memorial service
2:00p.m.
de Kadt family land, Middle Way Farm
322 Lander Road, Lee, MA
MAKE A DONATION
Please consider a donation as requested by the family.
MEMORIES & CONDOLENCES
1 Entry
God bless Ron and his contributions to A Course in Miracles. Our hearts are with him. Glad he knew he was not a body when he left. Grateful to have received his obit. Prayers to you all. Love, Laura Fenamore [email protected] / acim.org scribe-authorized publisher of A Course in Miracles since 1975
Laura Fenamore
Other
September 8, 2021
Showing 1 - 1 of 1 results