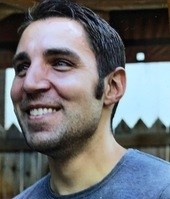 BORN
1981
DIED
2021
Stephen Curtis Collazo
Stephen Curtis Collazo passed away on May 12th, 2021 after a motorcycle accident in Greensboro, North Carolina, on April 23, 2021. He remained in a coma for 3 weeks, before succumbing to his injuries. Curtis joins his father, Ramiro Collazo, who pre-deceased him in 1990. He is survived by his mother Josiane and step father Jim Psaki, brothers Marcel and Justin (wife Natalie, children Madeleine and Brayden), his step sisters Jen, Stephanie, and Kristen.
Curtis was born on September 1, 1981 in White Plains, NY. His family moved to Greenwich, CT in 1985. He attended Greenwich High School, class of 2000. He graduated with a business degree from the University of Connecticut. He was working on his PhD in Clinical Psychology at UNC Greensboro and was awarded his Master's Degree the day before the accident. Curtis resided in Boulder, CO for several years, prior to graduate school, where he taught music to young aspiring musicians.
Curtis was always passionate about music. Growing up in Greenwich, he banged on his older brother's drums at the age of six. Over the years, he acquired an aptitude for percussion that captured and inspired anyone who had the pleasure of hearing him play. Curtis also played piano and taught himself to play guitar during his musical journey. He had incredible musical timing and an innate feel for all music. He was a "natural," a true talent. He wrote and recorded his own music, and played in several bands, touring the country and recording with them. Curtis often played Beethoven's 'Fur Elise' for his mother on the piano knowing how much she loved it. One of his dreams was to go to New Orleans and play jazz. He moved to New Orleans after Hurricane Katrina, mainly to help build houses for Habitat for Humanity while also soaking in the jazz culture.
Curtis played many sports growing up, most recently playing ice hockey in a men's league in Greensboro. He grew up alpine skiing with his family, and in typical Curtis fashion, also became a telemark skier.
Curtis was a gentle and kind soul. He was a selfless person who cared deeply for his family and his friends. Anyone who had the pleasure of meeting Curtis would be met with the utmost compassion and empathy – just a few of his endearing qualities. Curtis had an incredible ability to spread love. His smile and laughter were infectious.
Curtis will be remembered for his many wonderful attributes and talents, despite struggling with mental illness at times. Instead of giving into the darkness, Curtis vowed to take his "greatest weakness" and turn it into a force for good. His goal was to use his own challenging life experiences to help others, as he pursued his advanced degrees. His persistence and desire to overcome what seemed insurmountable, became his mission of reaching out to others who are suffering. This defines who Curtis was – a deeply compassionate, loving, empathetic person, with an unparalleled drive to overcome adversity. He will be greatly missed and forever in our hearts.
"Death leaves a heartache no one can heal, Love leaves a memory no one can steal." Anonymous, from an Irish headstone
A celebration of Curtis's life will be held in Greenwich CT on September 25, 2021. If interested in attending, contact [email protected]
If you are moved to honor Curtis' deep love of music and its connection to social change, the family suggests a contribution made in Curtis' name to the Stamford, CT non-profit PROJECT MUSIC, (www.projectmusic.org) which offers free, high quality music education to inner city children, making a deep impact on their lives.
Published by Greenwich Time on Aug. 27, 2021.
To plant trees in memory, please visit the Sympathy Store.
MEMORIAL EVENTS
Sep
25
Celebration of Life
Greenwich, CT
MAKE A DONATION
MEMORIES & CONDOLENCES
0 Entries
Be the first to post a memory or condolences.