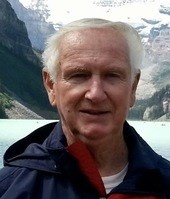 BORN
1940
DIED
2021
ABOUT
John Jay High SchoolJohn Jay High School
FUNERAL HOME
Castiglione Funeral Home
544 Old Post Road #3
Greenwich, CT
Thomas "Carl" Peck
1940 ~ 2021
Thomas "Carl" Peck passed away unexpectedly in Greenwich on Thursday, August 12th, with his wife, Diane, of 55 years by his side.
Carl was born on December 26, 1940, in Mount Kisco, NY, the son of Willis K. and Marie (Wade) Peck. Carl was predeceased by his older brother Bill and sister-in-law Helen. He will be greatly missed by his younger sisters Linda Peck Boardman, Patricia Peck and many nieces, nephews, and extended family.
Carl graduated from John Jay High School in Katonah, NY in 1958 and went on to serve proudly in the U.S. Navy. During his service he worked as an electrician on several different ships, including his beloved Great Sitkin. He thoroughly enjoyed his time of service and eagerly awaited yearly reunions with friends and shipmates. After his discharge from the Navy, Carl came home to Vista, NY and worked as an electrician throughout Westchester County, NY.
On April 23, 1966, Carl married the love of his life, Diane Hroziencik, and moved to Greenwich, CT. Carl was the very proud father to their son Tim (and wife Kelly) of Old Greenwich, and daughter, Karen (and husband Scott) Brady of Morris, CT.
Perhaps his most treasured role was that of "Pop Pop" to his seven grandchildren: Matthew, Riley and Samantha Brady and Tim Jr., Elizabeth, Davies and Emma Peck. He spent years fixing swing sets, building legos and playing with matchbox cars.
Carl began working for the Town of Greenwich as an electrician in the Sewer Department. He embraced every opportunity to broaden his personal and professional education, eventually rising to the position of Electrical Inspector and then Deputy Building Official for the Town - a position he held until his retirement. His coworkers from the building department became his "work family", and he valued and maintained their friendships throughout his retirement. For many years Carl was an active member of the District 8 Building Officials and looked forward to their monthly meetings.
Diane and Carl traveled extensively in their retirement years, visiting all 50 states, much of Canada, and several Caribbean islands. They particularly enjoyed discovering as many National Parks as possible in their travels. No matter where Diane told Carl to drive, he followed her directions and brought them to safe arrival on many wonderful adventures. They were never happier than when they were together.
Carl's other great love was volunteering as a firefighter. Following in his father's footsteps, he started off in the Vista Fire Department, rising to the rank of Assistant Chief. Upon moving to Greenwich, he joined the Glenville Volunteer Fire Department, where he served tirelessly for almost 50 years as a firefighter and later as Treasurer. He was also a board member of the Greenwich Volunteer Firemen's Association. Carl was actively involved with the American Legion Post 29, where he served as Secretary and spearheaded the Legion's annual efforts to commemorate the fallen veterans by placing flags at local cemeteries each Memorial Day. Carl was a patriotic New England Yankee with a devout belief in the democratic process and the right to vote. He volunteered for many years as an active member of the Greenwich RTC and other town organizations.
Carl was a brilliant, humble man of few words, but you could never find a kinder, gentler soul. He was a true gentleman with a sparkle in his eye and a joyous sense of humor to enlighten any difficult moment or spark a wave of laughter. He was blessed with many friends throughout his life. He loved his family, he loved his country, he loved his town and he lived a life of service. He will be truly missed.
A wake will be held Tuesday evening, August 17th from 4:00-8:00 p.m. at Castiglione Funeral Home, 544 Old Post Rd #3, Greenwich, CT.
There will be a memorial service, also at the funeral home, on Wednesday, August 18th at 11:00 a.m. with burial immediately following at Putnam Cemetery, Greenwich, CT.
In lieu of flowers, please consider making a donation to a fund, established in Carl's name, for Volunteer Firefighter Education and Training at the Glenville Volunteer Fire Company, 266 Glenville Road, Greenwich, CT 06830.

Published by Greenwich Time on Aug. 14, 2021.
To plant trees in memory, please visit the Sympathy Store.
MEMORIAL EVENTS
Aug
17
Wake
4:00p.m. - 8:00p.m.
Castiglione Funeral Home
544 Old Post Road #3, Greenwich, CT
Aug
18
Memorial service
11:00a.m.
Castiglione Funeral Home
544 Old Post Road #3, Greenwich, CT
Aug
18
Burial
Putnam Cemetery
Greenwich, CT
Funeral services provided by:
Castiglione Funeral Home
MAKE A DONATION
MEMORIES & CONDOLENCES
Sponsored by Castiglione Funeral Home.
11 Entries
Diane, I am so sorry to hear of Carl's passing. He was a wonderful man and the two of you were an amazing couple. My deepest sympathies.
Jan Gunnip
August 19, 2021
So long old buddy. Always enjoyed working with you, and also seeing you after your retirement. Will miss your smiling face... You were definitely "one of the good guys"!!!
Stan Olszewski
August 18, 2021
You are all in our thoughts and prayers during this very sad time. May you find peace in special memories.
Doug & Kathy Brown
August 17, 2021
Sorry to hear about the passing of Carl. He will be remembered in our thoughts and prayers. May he rest in peace.
Ken and Nancy Neilsen
August 16, 2021
What a beautiful and well-lived life. Our deepest condolences to Tim and the entire Peck family.
Julie and Warren Hutchison
August 15, 2021
Our thoughts and prayers are with Karl's family at this difficult time. The Town has lost another good & loyal man. May he rest in peace!
CAROLE & DAVE ROBBINS
August 15, 2021
My deepest sympathy to Diane, and Tim and Karen and your families on your loss. Carl was a wonderful and kind man with a sweet soul! He will be fondly remembered! God rest his soul and give his family strength to get through the difficult days ahead.
Annette Combs
August 15, 2021
(whats happening) miss you.
Tony
August 15, 2021
Diane and family, so sorry to hear of your loss of Carl. My condolences to you and family
John Neilsen
August 15, 2021
Diane and family, You are in my thoughts and prayers in this time of sorrow
Lynn Raiente
August 14, 2021
Our thoughts and prayers are with the family in this difficult time
Greenwich Town Clerks Office
August 14, 2021
Showing 1 - 11 of 11 results