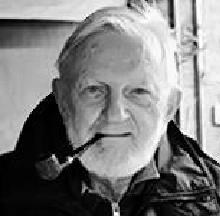 Theodore Roosevelt and Clara Jane (Neal) Young, the youngest of their four children. The family moved to Wabash,

Indiana, where Elwin worked in the family restaurant, The Klondike. He enlisted in the Air Force in 1952 during the Korean War, serving in Japan and Taiwan, working in communications. In 1960, he graduated from Manchester College in Indiana. While at college, he met Mary Evelyn Shellabarger. They married in Beavercreek, Ohio, on July 14, 1957. They were married 50 years. She preceded him in 2008. He was also preceded by sisters Bernice and

Marjorie and brother Donald. He taught math at Beavercreek High School for 26 years and was instrumental in developing the computer science program at BHS. He served as president of the local teachers union. After retiring from BHS, he taught computer classes at the University of Dayton for 12 years. He served in several positions in the Beavercreek Senior Club. He was active in Barbershop choruses in Xenia and Naples, was active in the Beavercreek Fire Department Auxiliary and helped with maintenance at Brethren Church Camp Woodland

Florida. She survives. He is survived by sons and daughters-in-law Robert and Melissa and David and Mary; grandchildren Jason (Ashlee), Clara, Michaela (Chase), and Nick; and great-grandson Hugh, sister-in-law Roberta Shellabarger and brother-in-law Dan (Roberta Lee) Shellabarger. He enjoyed playing cards at the Senior Center and with family. He also