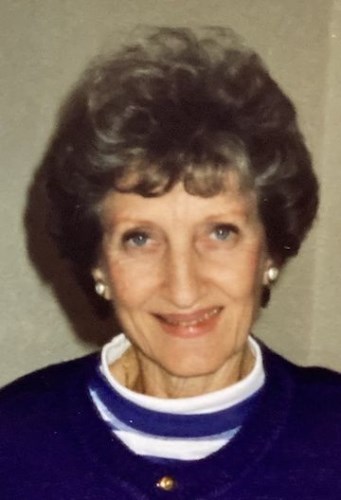 An accomplished and talented musician, Fern was working as a pianist at Abbey Delray South in Delray Beach, Florida, until her passing. Growing up in Hammond, Louisiana, in a musical family, she received her Bachelor of Music Education at Southeastern Louisiana College, where her father, Dr. Ralph Pottle, Sr. was the head of the music department.

After marrying Connie Atkinson from Highland Park, New Jersey, she became a beloved teacher of vocal music in the Highland Park school system for decades, as well as the choir director of the Methodist Church in Highland Park. Upon retirement in Florida, she continued playing piano, tennis, bridge, and won many awards in ballroom dancing competitions while in her 80s.

Fern is fondly remembered as being a very happy, positive person throughout her lifetime.

Published by The Daily Star on Oct. 23, 2021.
To plant trees in memory, please visit the Sympathy Store.
MEMORIAL EVENTS
To offer your sympathy during this difficult time, you can now have memorial trees planted in a National Forest in memory of your loved one.
MEMORIES & CONDOLENCES
4 Entries
It´s taken a good amount of time to be able to write this tribute as it continues to be so difficult to accept that the last of our favorite four-some is gone. Fern, known to us only as "Auntie Fern" and Connie, as "Uncle Daddy" were our parent´s life-long and very best friends. Over the years spent together in Highland Park and summers at the shore, both of them grew to be no less than our extended family. So many wonderful memories were forged during the decades spent with Auntie Fern and Uncle Daddy. Some of the earliest memories of Auntie Fern include several times where she would tuck my sister Tai and me into bed at night, only to first take out time to do "this little piggy" and the very best part of it was that the last little piggy would always go wee-wee-wee all the way up to the top of our heads where she would plant a million little kisses. We absolutely loved that! I remember vacationing in Europe together where we walked the alps, and even going to the World´s Fair together! For years we shared a mid-week night out with the Atkinsons at the Edison Diner, where my little brother John would indulge in countless dill pickles and I could still tell you to this day who would order what. Friday night was always reserved for pizza at the Evans´ house, (followed by hours of their favorite bridge playing, while Dawn and Condit would watch tv with us ("Chiller Theater") or play board games ("Clue"). We spent many a delightful Sunday evening visiting the Atkinson´s home for dinner where Auntie Fern would make a great meal often including some fancy creamy green beans with "French´s Crispy Fried Onions" on top followed by her delicious lemon cake. We would all sit together and finish the evening by watching, (in color), the Wonderful World of Disney. As you can imagine, life was great and music was an ever-present part of everyday life with the Atkinsons. All of us were in our church choirs together and Auntie Fern was as my favorite music teacher in school. I was always amazed by her beautiful voice and particularly remember one of the first songs we learned in school from her; "The Happy Wanderer!" She also taught us how to play guitar in school, "House of the Rising Sun!" Uncle Daddy taught us how to play the piano and any other instrument we wanted to play! The close family dynamic we all shared through the years later grew to include our own children who formed an equally close bond with Auntie Fern (and Connie) as time went on. The kindness and love that Fern has shown our family over the years, leaves us heart- broken with the news of her passing. The memory of her singing "With You" from Pippin with her angelic voice at our wedding ceremony accompanied by Uncle Daddy on the piano is one that has always made us smile, and now cry. In fact, our daughter will be married in a few weeks and she called us in tears, requesting that the very same song be included in her wedding ceremony and if possible, find the recording of Auntie Fern singing it. To put into words how very special Fern Atkinson is to our family is simply not possible and it has hurt so very much to lose her. We do however, like to think that she is now with Uncle Daddy, and Otis (dad) and Mary (mom) in tennis heaven. We hope that Dawn and Condit and their families know that our love for their mother (and Father) extends to their families and we hope that with time, the pain will pass and the million sweet memories will shine through. With Much Love, Mary Beth, Tom and Family
Mary Beth and Tom
Family
November 3, 2021
Fern was in my life, in so many significant ways, from 7th grade right up to the present. As my 7th grade chorus teacher, she was responsible for finding me a good pop and jazz piano teacher at the time. Due to my lifelong friendship with her daughter, Dawn (and granddaughter, Devon), I had the wonderful opportunity to share music, holidays, dinners, and family get togethers for the past 50 years. She was an extremely warm, positive and gracious lady, I will miss her a lot.
Steve Riffkin
October 25, 2021
My deepest condolences to Dawn and Condit and family. She was an amazing teacher that we a loved growing up. May her memory be a blessing always.
Gayle Lederman
October 24, 2021
I am so sorry to hear this. She was instrumental (not intended pun) in my musical development in Middle School. She had such poise and grace. To pull that off in a middle school says something about her nature. And, she and Connie gave us two great, talented kids. I played music with all of them and they greatly enriched my life. Thanks much. Big hug from me to all who want it.
Ed Cohn
School
October 24, 2021
Showing 1 - 4 of 4 results