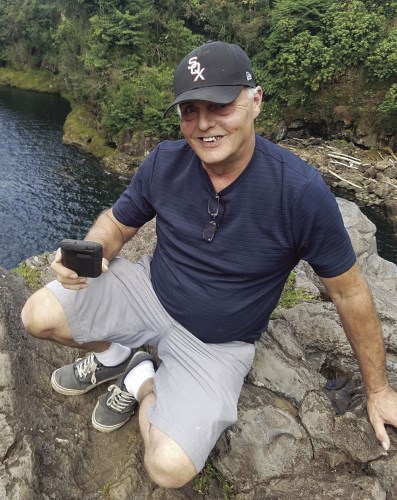 THREE OAKS - Cary Allen Harrington, 63, of Three Oaks, passed peacefully in his home, on August 14, 2021, surrounded by his wife and two children.

He was a graduate of River Valley High School, class of 1975.

He also graduated Ferris State with an associate's degree in graphic art.

Cary was a man larger than life. He impacted many with his humor and hilarious stories.

He played in many of men's softball leagues, coached both little league, and girls softball.

He loved working to help put together the Three Oaks little league fields and Timbertown park. He loved his community and the youth.

He also served on the Three Oaks Township planning commission. And, in the past was a youth group leader with his wife, Nancy.

He was employed by Groom Construction Company, Salem, Massachusetts. He loved his job, the travel, mostly the people he worked with.

Cary loved his family, his beautiful grandbabies, and vacationing on Florida's gulf coast.

He is preceded in death by his late father, Allen, and two uncles , Alton Harrington and Roger Simpson. Grandparents Thurber and Myrtle Becker and Cortez and Helen Harrington.

Published by Harbor Country News on Aug. 26, 2021.
To plant trees in memory, please visit the Sympathy Store.
MEMORIAL EVENTS
May
14
Celebration of Life
IN
MEMORIES & CONDOLENCES
4 Entries
We are so sorry to hear that Cary passed away. Cary was in our wedding in 1977, Jay and Crystal Dunham. Jay and I went to college with Cary. He was a wonderful, funny guy. He always had a smile on his face. We are so sorry for your loss.
Crystal Dunham
Classmate
October 7, 2021
Dear Nancy and family I am so sorry for your loss and may you always be comforted by your beautiful memories and the love of your family and friends, and as you walk through life may God bring you hope and healing
Sandy Watkins
Sandy Watkins
Acquaintance
August 31, 2021
My condolences to Cary's entire family. I worked with Cary at Groom and he was always such a light and pleasure to work with and talk to. Cary would often call for his travel arrangements and keep me on the phone for "just one more thing real quick," those things were mostly stories about his family and grandchildren who he absolutely adored. You are all in my thoughts and prayers. Cary will be greatly missed by all of his coworkers.
Samantha
Coworker
August 25, 2021
I wish to extend my condolences to you for your loss. May God comfort you and give you peace during this time of pain and sorrow.
RR
Neighbor
August 25, 2021
Showing 1 - 4 of 4 results