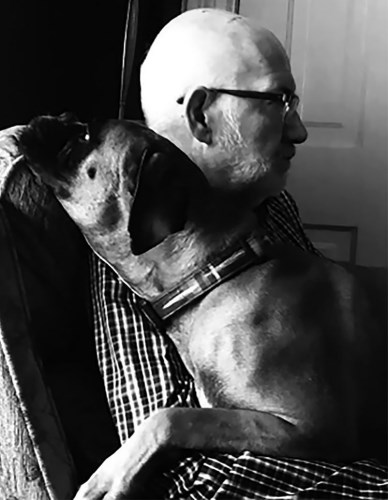 THREE OAKS - Don Deward Jackson, 63, suddenly passed away Monday, June 28, 2021. He is survived by his wife of 41 years, Julie (Dotts) Jackson, and his daughters Sarah (Phil) Randall of Tennessee and Cassie (Scott) Patterson of South Carolina, and predeceased by his youngest daughter Kindra Dee Jackson, who succumbed to colon cancer in 2017. His boxer, Maggie will be waiting for him on the rainbow bridge, and Jackson is still looking out the window with us, waiting for him to come in the door.

He was looked up to by his family and the community, not only because he was 6'6", but also because he was a source of calm advice and solid plans. We were shocked by his passing because this was not the plan.

Born November 7, 1957, to Don and Dorothy (Klute) Jackson, both educators, he developed a passion for history through travel on summer vacations. After graduating from South Haven High School, he moved to Phoenix and became a chef. He felt he outdid himself when he married the cool, sexy chick across the hall, and always felt lucky to have her as his partner. His wedding ring of turquoise and silver reflected this time in his life.

Family wasn't the most important thing to Don: it was the only thing.

He moved home, got his CPA and bought the family house in Three Oaks. He spent evenings in the room in which his mother was born.  The local Forest Lawn Cemetery has relatives dating back to the founding of the town.

Cooking for family gatherings was where Don was happiest. His kitchen was worthy of a professional chef, and when he pulled out Penzeys spices, the best pans, and Russell Wright dishes, you knew you were in for a treat. His kitchen creations, especially his prime rib Christmas dinner will always be missed.

He relished the role of grandpa and loved all seven grandchildren. When he thought of taking a break from work, he would visit the ones he could, carrying them on shoulders, or taking them on a canoe.

His success as a CPA can be chalked up to his ability to listen to others and calmly explain the best plan forward. It was with great pride that he was a member of the community and contributed his time to both the schools and local government.

This was not the plan, but he would be the first to tell you, "It's all going to be OK". We are pretty sure there's a grill and a scotch waiting for him.

A gathering of friends and family will be held at 3:00 p.m. on Saturday, July 17, 2021, in the Randall Couchman American Legion Post #204 located at 204 West Linden Street, Three Oaks, Michigan.

Published by Harbor Country News from Jul. 1 to Jul. 8, 2021.
To plant trees in memory, please visit the Sympathy Store.
MEMORIAL EVENTS
Jul
17
Memorial Gathering
3:00p.m.
Randall Couchman American Legion Post #204
204 West Linden St., Three Oaks, MI
Funeral services provided by:
Wagner Family Funerals - Pobocik Chapel - Three Oaks
MEMORIES & CONDOLENCES
6 Entries
Dear Julie and Family, there are not words for the heart felt sadness at hearing that Don's passed away. Everyone that knew and worked with Don will feel your loss.
Linda Patejdl
Friend
July 14, 2021
Dear Julie and family, there are not words to describe the our heart felt sadness after hearing of Don's passing. Your loss is shared by everyone that knew and worked with Don. Barry & Linda Patejdl
Linda Patejdl
Friend
July 14, 2021
Our sincere condolences to the family. Don was a wonderful friend and colleague. His wit and wisdom will be sorely missed. With sympathy, Kim and Chuck Cousineau. Formerly of 10075 Townline Road, Union Pier.
Kim and Chuck Cousineau
Friend
July 13, 2021
He, will be so missed. He was a Great Man.
Larry + Karen Kiernan
Friend
July 12, 2021
My condolences to the family. Don was my CPA for many years and I will miss him.
Ruby Reitz
July 12, 2021
Words fail to express our sorrow for your loss. Our hearts go out to your family.
Elizabeth & David Flick
July 7, 2021
Showing 1 - 6 of 6 results