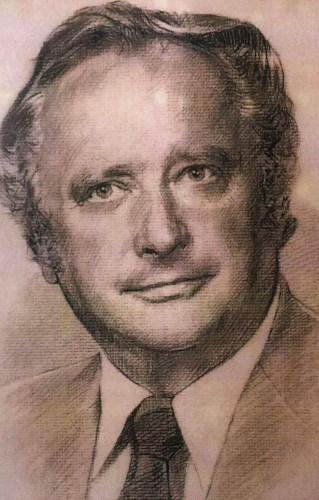 His life began on April 12, 1935 in Chicago, Illinois and was born to Sigmund and Angeline Koziel. He married Thelma Pauline Traxler June 23, 1956 at Saint John Kanty Catholic Church in Rolling Prairie, Indiana. After sixty-four years of marriage, she preceded him in death March 1, 2021.

He and Thelma were forty plus year members of Orchard Hills Country Club, where they enjoyed both golf and all the friends they made. They were also life long Notre Dame fans where they held season tickets for many years. John, growing up on the south side of Chicago was also a life long White Sox and Bears fan. He and Thelma loved attending their children and grandchildren's sporting events and were their biggest fans.

John will be greatly missed by family and friends. He is survived by five of his children, Michael (Sally) Koziel of Niles, Mark Koziel of Buchanan, Matthew Koziel of Bridgman, Toni (Rick) Canada of Chicago, Illinois, and Nicholi (Bob) Eddy of Bridgman; eleven grandchildren; eight great grandchildren; sisters, Victoria Parrett of LaPorte, Indiana, Patricia Hemphill of Benton Harbor; and a host of nieces and nephews.

He was preceded in death by his parents; his wife; one son, Martin Koziel; and siblings Richard Koziel, Michalene Smith, Bernard Koziel, Annette Lashua, and Joseph Koziel.

John had a genuine love for life and for his family and friends. He loved meeting new people. His endearing and charming personality allowed for everyone he met to call him a friend.

The family will observe a private remembrance.

John will be laid to rest with his beloved wife, Thelma, in Saint John Kanty Cemetery, Rolling Prairie.

The family prefers contributions in John's memory be made to St. Mary of the Assumption, 28 West Ash Street, Three Oaks, Michigan 49128.

Published by Harbor Country News on Oct. 21, 2021.
To plant trees in memory, please visit the Sympathy Store.
MEMORIAL EVENTS
To offer your sympathy during this difficult time, you can now have memorial trees planted in a National Forest in memory of your loved one.
Funeral services provided by:
Wagner Family Funerals - Pobocik Chapel - Three Oaks
MEMORIES & CONDOLENCES
0 Entries
Be the first to post a memory or condolences.