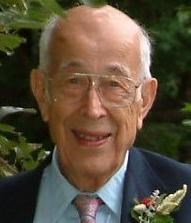 Arthur Watson Sweeton, III, of Canton Center, died on Saturday, September 27th at the age of 101. He died peacefully with his family by his side at Cherry Brook Health Care Center in Canton. Arthur was born on April 16, 1913 in Darien, Connecticut, son of Arthur W. Sweeton, Jr. and Helen Humphrey Sweeton. Arthur spent his early years in Brattleboro, Vermont where his father was a County Agent for U.S. Department of Agriculture. The family then returned to Canton to live on a 140-acre farm on West Road. Arthur's interest in trains began when his father rode the freight train with their dairy herd down from Vermont to Connecticut. The family raised dairy cows, strawberries, hay, clover, alfalfa, and, for a time, tobacco crops on their West Road farm. Arthur helped out on the farm, along with his brother Frederick and his sister Barbara. His mother was also an artist and a teacher. In 1931, Arthur graduated Class Valedictorian from Collinsville High School. He was accepted to Yale University with a scholarship. He graduated with Bachelor of Science Degree in Civil Engineering in 1935, and immediately began working at the Metropolitan District Commission (MDC) as engineer draftsman and inspector of the sewer construction work in Hartford. At a family summer picnic he met Eunice Minor of Bristol. Eunice commented that she liked Arthur because he was "one of the only boys who talked". They were married on September 7, 1940. Arthur and Eunice raised three children, Frederick, Ruth Ann and Barbara in Newington where they were active members of their community and church. They summered at the Humphrey family shore cottage in Old Saybrook where Arthur loved to swim and fish. One of his favorite sayings was "Slide with the Tide". Arthur's work at The Metropolitan District in Hartford spanned 43 years as Assistant Engineer to Chief Engineer to District Manager. During his career, Arthur helped create the sewer systems in Hartford and surrounding towns. He was also part of the team that built the first sewage treatment plant on the Connecticut River. During his career, he belonged to many professional organizations including American Society of Civil Engineers (President of Connecticut chapter), Rotary Club of Hartford, Yale Science and Engineering Association, Connecticut Academy for Science and Engineering (Charter Member) and New England Water Patrol Association. Arthur retired in 1978 and he and Eunice moved back to Canton Center where he volunteered for the First Congregational Church Canton Center, Canton Land Conservation Trust, Canton Historical Society, Farmington Valley Railway Society, and American Canal Society. His interest in transportation led him to write a chapter on the topic for the Canton Historical Society. He also created an exhibit at the Canton Public Library, "The Farmington Canal in Farmington Valley", in which he shared his collection of original engineering survey maps. He loved trains and enthusiastically took many train trips throughout the US, Canada and Europe. He advocated to government officials for the support for Amtrak. He was also passionate about land conservation. He had many interests from genealogy to spicy food to "gadgets" and new technologies. He often would clip newspaper articles to send to friends and family, sharing and networking before modern day Facebook. Arthur led his life with kindness, respect for all, perseverance, and constant curiosity. He was a loving husband, father, brother, uncle, grandfather, and great grandfather. He is predeceased by his wife of 73 years, Eunice Sweeton, and by his brother Frederick Humphrey. He is survived by his son, Frederick Arthur Sweeton of Canton Center; two daughters, Ruth Ann Smith of Monmouth, ME and Barbara Burnham and her husband William of Grosse Pointe, MI; his sister, Barbara Sweeton Tuller of West Simsbury; his brother in law Paul J. Minor and his wife Jane of Bristol; four grandchildren, Amy Smith Wilmot, Rebecca Burnham Ceresa, Adam Minor Smith, Sarah Burnham McPartlin and their spouses; and twelve nieces and nephews and their spouses. Arthur and Eunice's later years were spent enjoying their eight great grandchildren, Noah, Verena, and Demiana Smith; Charlie and Maxwell McPartlin, Jack and Josephine Eunice Ceresa and Liam Arthur Sweeton Wilmot. Arthur lived his final years at home with the aid of his son, Frederick, daughters, Ruth Ann and Barbara and caregivers. The family would like to thank Valrie Francis and Ida Jallow, McLean's Hospice, and Cherry Brook Health Care Center for their extraordinary care. A memorial service will be celebrated on Sunday, November 2nd at 2:00 PM at the First Congregational Church of Canton Center, 184 Cherry Brook Road, Canton Center. Burial will follow in the Canton Center Cemetery. In lieu of flowers, memorial donations may be made to the First Congregational Church Canton Center, Canton Historical Society in Collinsville, Cherry Brook Health Care Center in Canton or McLean's Hospice of Simsbury. Please visit Arthur's "Book of Memories" at www.vincentfuneralhome.com for online condolences.

Published by Hartford Courant on Oct. 5, 2014.
To plant trees in memory, please visit the Sympathy Store.
MEMORIAL EVENTS
Nov
2
Memorial service
2:00p.m.
First Congregational Church of Canton Center
184 Cherry Brook Road, Canton Center, CT
Nov
2
Burial
Canton Center Cemetery
CT
Funeral services provided by:
Vincent Funeral Homes
MAKE A DONATION
MEMORIES & CONDOLENCES
Sponsored by the family.
4 Entries
Dear Ruth Ann, Amy and the rest of your family,
You are in our thoughts and prayers. What an amazing delightful man. The gift of longevity can be a great joy to those of us who are fortunate to have loved ones to experience this gift. Arthur and Eunice are together for eternity. May they continue to watch over you. May God bless you all and bring you comfort and peace. May the gift of memory bring you comfort. Love Marian and Roger Wilmot
October 12, 2014
Much love and many happy memories to you, my friends, Ruth Ann and Amy.
Mary Beth Paquette
October 10, 2014
I was one of many people benefiting by Arthur's pioneering Facebook ways, receiving a number of very interesting newspaper clippings from him over the years. He was a man of great kindness and talents. I will miss him. Deepest condolences to his family.
Harold Burbank
October 9, 2014
My condolences to Arthur's many family members. I shall always remember him as a kind and wonderful man.
Frederick G. Humphrey II, Guilford, VT
October 9, 2014
Showing 1 - 4 of 4 results