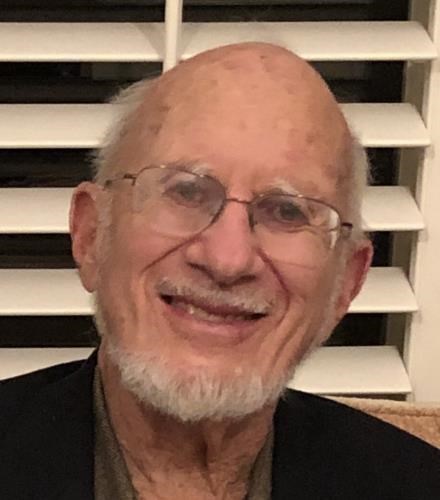 David M Geetter, MD died Sept 23rd at his home in Bloomfield, CT. David was born in New Britain, CT and attended Hartford High School and Trinity College. He graduated from Jefferson Medical College and served as a captain in the U.S. Airforce before taking a residency at Yale. He had a long and successful career as a neurosurgeon in the Hartford area and for almost 50 years he volunteered as the gratis medical director for Hartford Easter Seals. He played tennis, sailed, scuba dived, skied and fished enthusiastically. He enjoyed theater and participating in community productions of the West End Players. Each summer he sought to grow the perfect cherry tomato. He loved music, dance and playing the cello, which he did with the West Hartford Symphony Orchestra since its founding. He leaves Joan, his wife of 63 years, his two daughters and their families, Darya (Dennis) and Erika (David) and grandchildren Tovia and Aaron Siegel. The oldest of five children, he was predeceased by his brother Albert and leaves his siblings and their spouses, Thalia "Buzzy" (Michael), Harold (Ava), Suzanne (Norman), as well as many nieces and nephews. He has donated his body to UConn School of Medicine Anatomical Donation Program and there will be no funeral service. In lieu of flowers, donations may be made to the West Hartford Symphony Orchestra, www.whso.org.
Published by Hartford Courant on Sep. 25, 2021.
To plant trees in memory, please visit the Sympathy Store.
MEMORIAL EVENTS
To offer your sympathy during this difficult time, you can now have memorial trees planted in a National Forest in memory of your loved one.
MAKE A DONATION
MEMORIES & CONDOLENCES
Sponsored by the family.
12 Entries
My deepest sympathy to the Geetter family on the loss of Dr. Geetter. He was beloved presence at Easter Seals for 50 years and he will be missed and remembered. My thoughts and prayers to his family. RIP Dr. Geetter.
Sandy H
October 15, 2021
David auditioned to join the orchestra as a cellist in 2002, our founding year. He loved our Wednesday evening rehearsals and always enjoyed practicing at home to prepare for them. He studied for years with Melissa Morgan, our featured soloist for the Victor Herbert 2nd Cello Concerto that was originally scheduled for March of 2020, now rescheduled for April of 2022. It was thanks to David´s annual suggestions through the years that I contacted her to join us. David, the orchestra and I, were very happy and enjoying our work with Melissa in preparing the concerto for our performance until our 18th season ended abruptly on March 11th of 2020 due to Covid-19. Our veteran members will remember David´s kindness and steadfastness by his arriving early to rehearsals at Sedgwick Middle School in order to move the piano and set up the chairs for the entire string section. He would always help with the concert stage setup at Kingswood Oxford. Speaking of stages, many will remember when he fell off the stage (while seated)) at intermission during a concert in Middletown. If you blinked, you missed it, as he handled it with great aplomb and jumped effortlessly back onto the stage. I´m sure our audience members will remember the two elder statesmen of the cello section who always sat together, Peter Gillies and David. One of David´s goals was to learn to play the cello in retirement, having played the violin as a boy. When Peter passed away in 2019 we honored him by leaving an empty chair in the cello section during the concert. We will now do the same for David.
Richard Chiarappa
Friend
October 8, 2021
I worked for Dr. Geetter at his practice and he was an excellent surgeon and great boss. Rest In Peace Dr. Geetter. Carolyn Soboleski
Carolyn and Edward Soboleski
Work
October 2, 2021
Carolyn worked for Dr. Geeter for many years in his medical practice. He was a superb neurosugeon and genuinely cared for his patients and workers and was very generous. We think of him often.
Edward and Carolyn Soboleski
Work
October 2, 2021
Happy Birthday in Heaven Dave Watch over us
J. Costas
September 30, 2021
We are saddened by David´s death. We watched him bravely train at the gym even as his strength declined. He was a lovely man, always ready to laugh.
Karl Fleischmann
Friend
September 28, 2021
Grief can be so hard, but our special memories help us cope. Remembering you and your loved one today and always.
Sheray McDowell
Other
September 27, 2021
Dave was the brother I never had, his brothers and sisters the siblings I never had, and his parents were a second set of parents for me. From High School through Trinity we were classmates. Justine and I attended his wedding to Joan. He has been a part of my life for more than 75 years.He leaves a huge hole in my life until we meet once again. The good Lord of us all will be kind to him. With deep sorrow, Bill and Justine
Bill LaPorte
September 26, 2021
Dr. Geetter was a true philanthropist, not only with his resources, but also with his time - the most precious commodity of all. RIP Doc!
David Daugherty
Work
September 25, 2021
I met Dr. Geetter briefly back in 1982 when I was a young man in considerable pain with a ruptured cervical disk. He saw me in his office, sent me next door to St. Francis Hospital, and successfully operated on me the next day. I have never forgotten him and I will always be grateful to him for his kindness and skill. He helped me to resume my life. Rest in peace, Dr. Geetter.
Jim Meade
Other
September 25, 2021
Dr. Geeter saved my life in 1980. I will always be appreciative. RIP.
Angela Trent
Work
September 25, 2021
RIP My friend Elaine
Elaine
September 25, 2021
Showing 1 - 12 of 12 results