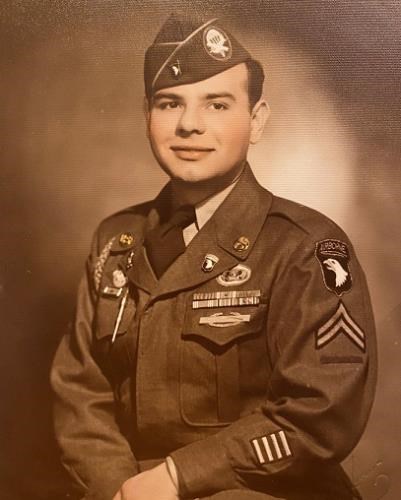 BORN
1923
DIED
2021
FUNERAL HOME
Hebrew Funeral Association Inc
906 Farmington Ave
West Hartford, CT
We began to believe he was indeed immortal. But, sadly, Edward H. Friedman once widely known as the Carpet King, succumbed to old age on December 4, 2021 at the age of 98. Ed was from West Hartford. Eddy owned the Friedman Rug Company and later Friedman's Floor Covering Center, which he ran with his wife and son, selling carpeting to everyone in Connecticut proving, as Woody Allen once quipped, that "There are three things Jewish people worship: God, Chinese food and wall-to-wall carpeting." Ed believed in two out of the three. Ed, the son of Sam and May Friedman (Lappen), was born in Hartford on September 30, 1923, and lived his entire life in the Hartford area. He grew up on Seyms Street, graduated from Hartford High, and then served in the 101st Airborne division of the Army in World War II. As a paratrooper, he was one of the brave soldiers who landed in Normandy and then served in the Battle of the Bulge -- among his proudest moments. Ed wore his Screaming Eagle hat till the day he died. Ed married his sweetheart and best friend forever Frances Swaller Friedman (aka Boobala, Franny, Fagie) after the war and the two of them moved to West Hartford and shared a life of travel, humor and nonstop fun for 74 years, never once leaving each other's sides (The Hartford Courant commemorated their relationship in "Love Story: Love at First Kiss Put this Couple on a Long Ride Together https://www.courant.com/love-story/hc-love-story-fran-eddy-friedman-1025-story.html Eddy may have been a businessman for a living, but he was an artist at heart: He sculpted like Giacometti (and his family called him Giacom-EDDY), loved to build and tinker and renovate rooms in the house. He enjoyed music of all types, conducting Mozart from his armchair and marching around the living room to the Marines' and Army's military bands. Until his late 80s, he regularly drove Fagie and a carful of friends to New York to see the ballet, go to theatre and visit museums -- until he no longer was able to drive long-distances. Even in his early 90s, Ed and Fran went out to lunch every day to split a sandwich (always her choice) and even trudged to the movie theatre to watch the Metropolitan opera live. And he kept his humor and sly wit – and abundant sweetness and love -- till his final days. Eddy leaves many survivors including his beloved and loving wife Frannie (his "bashert"), his three adoring children Mitchell (Ann), Bruce (Arline) and Karen (Harry), his nieces Donna and Leslie, and nephew Kenny (Patty and Anna, Ami and Mia), a bevy of loved cousins and many fabulous friends who were a lifeline, particularly in his final years. He is pre-deceased by his brothers Harold and Stanley and his nephew Larry. He was also blessed to have four wonderful, loving long-time caretakers Sophia, Marion, Vanessa and Dorothy – who helped him through his final years. We also want to thank those who helped him at the end: Gail and Marzena at the VA Home-based program, Emily and Rosemarie at Beacon Hospice, and Sharmilla. There was a graveside service with full military honors on Wednesday December 8, 2021 at 11:30 a.m. at the Hartford Mutual Society Cemetery. The family is observing a private period of mourning. In lieu of flowers, memorial donations may be made to Planned Parenthood of Southern New England, at 345 Whitney Avenue New Haven, CT 06511 https://bit.ly/3xYx8xV; or to Hartford Hospital at https://giving.hartfordhospital.org/donate; or the Home Based Primary Care at the Veterans Administration (VA) at 950 Campbell Avenue, West Haven CT 06516 -- or please donate to a charity of your choice. Eddy will be loved forever and will always live in our hearts. Funeral arrangements were conducted by the Hebrew Funeral Association, West Hartford, CT.

Published by Hartford Courant from Dec. 7 to Dec. 8, 2021.
To plant trees in memory, please visit the Sympathy Store.
MEMORIAL EVENTS
Dec
8
Graveside service
11:30a.m.
Hartford Mutual Society Cemetery
74 Wolcott Rd, East Granby , CT
Funeral services provided by:
Hebrew Funeral Association Inc
MAKE A DONATION
Please consider a donation as requested by the family.
MEMORIES & CONDOLENCES
Sponsored by the family.
17 Entries
Dear Franny and family, so sad to hear about Eddy´s passing. Lots of wonderful memories! Much love to you all. Todd and Richard
Todd Mandell
Friend
December 14, 2021
How fortunate we were when we met under "our" tree on the lawn at Tanglewood. It was a wonderful long lasting friendship and we are so sorry to learn of Ed's passing. He will be missed! Our sincere condolences.
Ellen J Gatchell
Friend
December 9, 2021
I was deeply saddened to learn of Ed's passing. So many fond memories.
Bruce McCrary
Friend
December 8, 2021
Our deepest condolences and prayers to Bruce, Arline & Family. We are so sorry for your loss and hope that you find peace in your loving memories!
Geralda & Victor
Work
December 8, 2021
Fran and Ed lived upstairs from us on Euclid Street in Hartford in the early and mid 50´s. I remember when he bought I believe was a 1956 green Packard which I thought was quite the car. At that time, Mitch and Bruce were very young and very protective of that car and they would scream and yell if someone would touch it. I have many fond memories of them living upstairs from us during those years. My parents were friendly with them throughout the years and on occasion would socialize with them. Through out the years, I watched his family grow as well as his business .From time to time I would see them at different functions and when I became a homeowner, I would use his services. I too remember him wearing his army jacket but was unaware as to what he had done during WW 2. It was truly remarkable. He had a terrific sense of humor and was a honorable businessman. My sympathy to the Friedman family on your loss of such a great guy. Richard Bialeck
Rich Bialeck
Family
December 8, 2021
May God bless you and your family in this time of sorrow. Ed was a good friend to all
Hannah & Mort Weinberg
Friend
December 8, 2021
Our sincere condolences to you, our dear friend, Donna and your family. We have enjoyed the many wonderful stories of your beloved Uncle Eddy.
Stephanie and Randy Diggs
December 7, 2021
To Mitchell and Franny...I was so sad when the store closed and I no longer had any contact with all of you. I will forever remember Eddy promising to give me Mitchell if I bought something (and I always did) but I never got him! He was a wonderful man and I will always think of him and the two of you with fondness...My deepest condolences. Ellen
Ellen Margel Seltzer
December 7, 2021
So very sorry for your loss. He sounds like a wonderful mad who lived a loving life. Sending you our deepest condolences. Arline's nephew & wife
Fredell & Doug Schnee
December 7, 2021
So sorry to here of Eddie's passing. He was always so kind to me growing up.Know he and Sammy are back together. May god be with all of you in this time of sorrow. Sincerely Dave DuBosar
David DuBosar
December 7, 2021
Love you Ed.
James Steinberg
December 7, 2021
Karen - I was saddened when I heard the news of your dad. I remember when he owned his stores - in fact I´m almost positive that my mom had given him business. He was such an honorable kind man. May the wonderful memories of your dad help you through this difficult time.
Amy Schrier-Pildis
Friend
December 7, 2021
As a little kid oh so many years ago, I remember visiting his carpet store where my family made purchases. I still remember what one of them looked like. We lived on Barbour Street in the North end of Hartford. Remembering this and Mr and Mrs Friedman touches my heart with nostalgia and happy memories of that time. As life does circle round, I was happy to renew the acquaintance many years later extending to the present with your son Bruce through my son Joe. Rest in peace, Mr Friedman. Reading your life story is an inspiration. I am made richer that you and your family have walked through my life. May your family be comforted by the thoughts and prayers of so many who care for you and for them.
Sandy Lupinacci Avampato
December 7, 2021
"What we once enjoyed and deeply loved we can never lose, for all that we love deeply becomes a part of us," Helen Keller. May your father´s memory be a blessing to all who knew and loved him.
Lemuel Odell
December 7, 2021
Sending sympathy to Donna and family. What a beautiful obituary. Eddy's spirit shines through.
Ann and Harold Seigel
Friend
December 6, 2021
Our sincerest condolences to you, Donna and your family. You spoke so lovingly of your "Unkie" that we feel we almost knew him. May his memory be a blessing.
Peter and Barbara Marshall
December 6, 2021
Our deepest condolences, Karen. Your Dad was someone I wished we could have met but from what you've shared with us he was an extraordinary individual who led a full and decent life.
Bob Aglow and Francesca Lyman
December 6, 2021
Showing 1 - 17 of 17 results