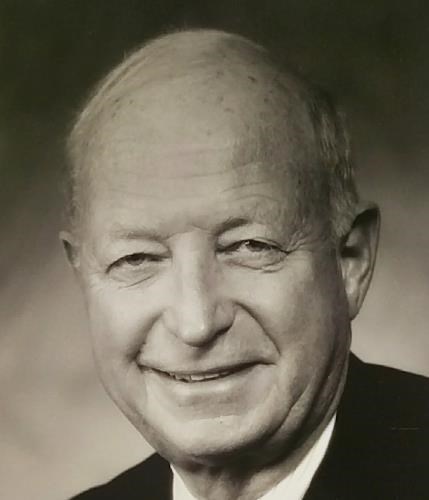 Francis Ellsworth Baker, a pioneer in technology manufacturing, passed away peacefully on January 31, 2017 at 87 years of age after a brief illness. He was in Vero Beach, FL, surrounded by his wife and family. As the CEO of Andersen Group, a venture capital firm, for nearly 50 years, Mr. Baker invested in and managed a series of businesses that brought new technology to their industries. In the 60s he manufactured rocket guidance systems as part of the space race. In the 70s he developed time base correctors used in early TV. In the 80s he ran a business pioneering medical imaging. At the end of his career, he helped build out the cable network that provides internet connectivity across Moscow, Russia. A hands on and charismatic leader, Mr. Baker took an active role in his investments building teams and securing contracts personally. His energy brought people together and helped them achieve exceptional goals. His approach was inclusive and he believed in creating a calm, clear environment to work through issues before acting on a decision. His desire to capitalize on new opportunities was matched by a strong adventuresome spirit. As early as 1954, while still a business school student, he and his French roommate, Jerry Fabry, secured a series of sponsors and drove an MG convertible from Boston to Rio de Janeiro filing newspaper articles during the trip and doing a speaking tour afterwards. In 1978 just after the new Department of Energy created the Geothermal Loan Guaranty Program, Mr. Baker invested in Geothermal Food Processors, an onion drying plant in Fernley Nevada. In 1997, as Glasnost opened up Russia, Mr Baker joined a small group of other Western investors buying a company that became part of VSMPO, the world's largest producer of Titanium. This led him to explore both Russia's undeveloped roads and it's newly developing legal infrastructure as well. Frank carried this spirit of adventure into his personal life. He and his wife Karen took the family hiking across the White Mountains, skiing in Vermont and Colorado, and sailing on the New England coast. For eight years Karen and Frank lived on a Swan 48 sailing over 20,000 miles through the Caribbean, across the Atlantic and in Europe. His passion for sailing has carried on in his children and grandchildren. Born in New York City, Mr. Baker attended Harvard College graduating cum laude in 1951 and was a member of the Pheonix Club, an editor of the Harvard Lampoon and part of the Hasty Pudding. He served as a Lieutenant in the US Navy, and graduated from Harvard Business School in 1955. He was an active member of the New York Yacht Club and former member of the Eastern Yacht Club. Later in life he supported the Underhill Society and was a member of the Society of Colonial Wars. He lived in Farmington and Avon Connecticut for over 30 years before relocating to Vero Beach, FL, in 1992 and for seven years he was President of the Baytree Condominium Association. He is survived by his wife, Karen Baker; his 6 children, Lucy Patricola, Cynthia Johnson, Godfrey Baker, Kim Dyson, John Baker and Kristen Stewart; and his 11 grandchildren, Zachary, Hannah, Tommy, Nathan, Sarah, Robbie, Alex, Nick, Sary, Will, and Macy; and his former wife Patricia Barry Baker. Services will be held at St. Augustine of Canterbury Episcopal Church in Vero Beach, FL, on February 11 at 11:00 am with a reception following at the Baytree Clubhouse. A second memorial will be held in Farmington, CT, later in the Spring. In lieu of flowers, the family asks donations be made to the National Multiple Sclerosis Society.

Published by Hartford Courant from Feb. 3 to Feb. 5, 2017.
To plant trees in memory, please visit the Sympathy Store.
MEMORIAL EVENTS
Feb
11
Service
11:00a.m.
St. Augustine Episcopal Church
Vero Beach, FL
MAKE A DONATION
MEMORIES & CONDOLENCES
Sponsored by The Family.
16 Entries
Franks words of wisdom that helped guide me when I took over as Baytree President, have still guided me as I interact with succeeding Presidents.
He was a astute and kind man, and clearly loved his family.
Barry Deathe
January 28, 2020
I am sorry for the Baker's family loss , Mr. Baker was a great man to have known. His wisdom will be missed by many .
John Brady
February 10, 2017
Dear Karen and Family: I was so sorry to learn of Frank's passing. My thoughts and prayers are with you and your family and may wonderful memories of a life well-lived be a comfort to you at this difficult time.
Sally Vanesse
February 6, 2017
I always enjoyed meeting with Frank over a cup of coffee to discuss matters Baytree, followed by sharing our experiences of early years in NYC - he was an intelligent and most engaging person. Julie and I will regrettably be unable to attend services but thoughts and prayers will be with the family.
Charles Curt
February 5, 2017
I was privileged to serve on the Baytree Board of Directors when Frank was President. He was a consummate leader: knowledgeable, fair and friendly. Frank was an asset to Baytree and a friend to me and Jack. He will be sorely missed by all who knew him. Our thoughts and prayers are with Karen and family during this difficult time.
Lois Work
February 5, 2017
My sincere condolences to the Baker family for the loss of their loved one, may God strengthen you all during this difficult time and may you find comfort through his son Jesus Christ's words found in John 6:40.
February 5, 2017
Frank Baker was a mentor to me , and his advice was always delivered with a wry grin and a sailing storey. I learned to listen to him very carefully, and respect him always. I will very much miss him
barry death
February 4, 2017
I am so sorry for your loss.

My brother and I were good friends of Godfry's in the early 1970's. I only met Mr. Baker a few times, and I was very young.

He sounds like an amazing person who wasn't afraid to think outside of the box and to act on his bold ideas.

My thoughts and prayers are with your family in this difficult and sad time.
Karl Lund
February 4, 2017
I am so sorry for your lost. May you find comfort in the God of all comfort because he cares for you. 1Peter 5:6-7.
February 3, 2017
It has been one of my life's great pleasures to have known my cousin Frank Baker and his wife Karen. His was a life well lived. He also had a strong interest in his family history, which he memorialized with warmth. I will do my best to ensure that his kindness and generosity are remembered as well as his considerable accomplishments. My condolences to his family.
John A Godfrey Sr
February 3, 2017
Best friend. Wonderful man. I will always miss him. Mark Izard
Mark Izard
February 3, 2017
To the Baker Family: My heartfelt sympathies go out to the family and friends during this difficult time. I hope that the promise in 1 Thessalonians 4:14 can bring comfort. Knowing that there's a hope for the ones we have lost in death can be so reassuring.
February 3, 2017
May your hearts be filled with wonderful memories of joyful times you shared together as you celebrate a life well lived and loved by many. Psalms 90:10.
AC
February 3, 2017
Godfrey, I am very sorry for your loss. My thoughts and prayers are with you and your whole family.
("The real", as Frank used to call me) Charlie Linn
Charlie Linn
February 3, 2017
Dear Karen and Family, My deepest sympathy at the passing of Frank. He accomplished much in his life, but I suspect his greatest accomplishment was his family. Take comfort in knowing he is now in peace.
Gary Koropatkin
February 3, 2017
May God bless you and your family in this time of sorrow.
J
February 3, 2017
Showing 1 - 16 of 16 results