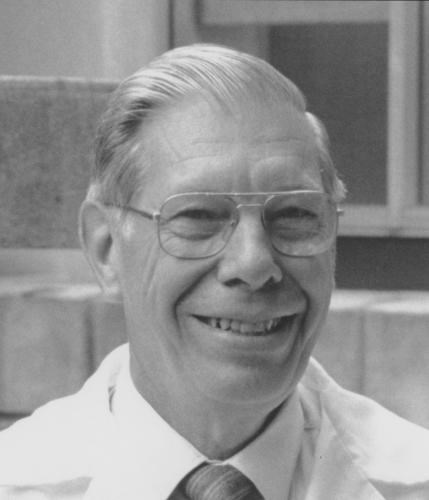 Dr. George N. Bowers Jr., M.D., of Hartford, CT passed away peacefully at home in his 90th year on August 16, 2015. George leaves behind a legacy of love, dedication and service to medicine, his family, friends, community, church, and country. George was born the oldest of three siblings in Hartford, CT on January 19, 1926, to George and Phoebe (Green) Bowers. Dr. Bowers grew up in West Hartford and graduated from Hall High School in 1944, then served in the Army for his country as a member of the 242 Infantry Regiment in the 42nd Rainbow Division in the European theater. After two tours of duty he met his bride Myra while they both were attending Colby College in Waterville, ME (B.A. 1950). He attended Yale University School of Medicine (M.D. 1954) and became Board Certified in Internal Medicine following his residency at Hartford Hospital and also completed a fellowship in Clinical Chemistry at the Pepper Laboratory in Philadelphia. Combining his love of medicine and chemistry he began his 42 year career as Director of Clinical Chemistry at Hartford Hospital. Dr. Bowers impacted medicine through clinical chemistry at the local, national, and international level by establishing laboratory standards and teaching post-doctoral fellows. He published over 200 peer-reviewed articles, was a Professor of Laboratory Medicine at the University of CT School of Medicine, served as President of the American Association of Clinical Chemistry (1974), and was an expert panelist and chairman of numerous working groups as a member of the International Federation of Clinical Chemists. In his youth he enjoyed spending summers at his grandfather's farm where he developed a love of agriculture. George spent many hours in his gardens and shared his enthusiasm with others. He also enjoyed being a vintner and even used his homegrown grapes to make his wine. He was a long-term member of the First Church of Christ Congregational in West Hartford, CT, where he served as a Deacon and chaired a Pastoral Search and a Pledge Campaign committee. With Hartford Habitat for Humanity, George participated in the renovation and building of over 60 houses as a volunteer and site leader. Dr. Bowers is survived by his wife of 65 years, Myra; their 4 children; Barbara and her husband David Palten, William Bowers, John and his wife Karen Bowers, and, Peter and his wife Jean Stadalnik; 8 grandchildren, James Palten, Elizabeth Ploof, Emily Palten, Kathryn LaCelle, Caleb Bowers, Zachary Bowers, Perry Bowers and Miranda Bowers; 1 great granddaughter, Ada Ploof. He is survived by his sister, Gloria Gill and was predeceased by his brother Richard Bowers. Dr. Bowers' family celebrated his life at a private memorial service in accordance to his wishes. The Family wishes to express their appreciation to Hartford HealthCare at Home Hospice Care, Visiting Angels, and the Staff and Residents of Avery Heights/Noble House for their caring and kindness. Donations can be made in his memory to either Northeast Organic Farming Association, CT NOFA, 126 Derby Avenue, Derby, CT 06418; or Hartford Habitat for Humanity, P.O. Box 1933, Hartford, CT 06144-1933. For online condolences, please visit www.taylorandmodeen.com

Published by Hartford Courant on Aug. 23, 2015.
MEMORIAL EVENTS
No memorial events are currently scheduled.
Funeral services provided by:
Taylor & Modeen Funeral Home
MAKE A DONATION
MEMORIES & CONDOLENCES
Sponsored by the family.
2 Entries
I first met Dr. Bowers in 1968. He was willing to hire me, newly graduated from college and an unregistered medical technologist. At that time he was assembling a new department know as the pH Room. We not only did blood gases but also ran Atomic Absorption Spectroscopy. This was a technology he hoped would allow him to run lead levels on water samples from reservoirs near highways. He was very concerned about lead levels in drinking water. Sadly, we never got AA lead levels off the ground.
In December of that year, my dad was lost in a work related accident. Dr. Bowers was one of two people who were unafraid to approach me and to offer assistance in any way possible. Throughout my 30+ years at HH he championed my cause, allowing me to become the first Overnight Supervisor. He was a wonderful mentor and someone I felt I could go to with any problem.
The lab was never the same without him.
I am heartily sorry for your loss but thankful to have known the man who was
"Dr. Bowers".
Pamela Murphy
September 24, 2015
Our heartfelt sympathies in this, your time of grief.
Taylor & Modeen Funeral Home
August 23, 2015
Showing 1 - 2 of 2 results